Zeno’s Paradox (of which he had several) 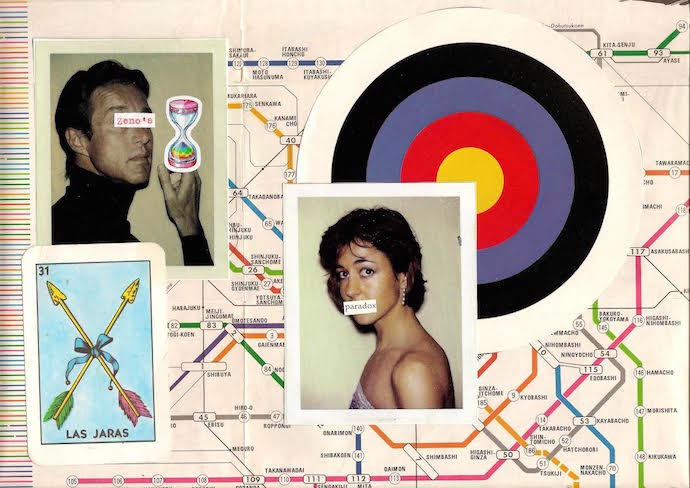 All plots tend to move deathward. This is the nature of plots. I read that in a book where no one memorable died. You once told me that no one memorable ever really dies. You were wrong. Everything is dictated by laws, by absolutes. We tend to gloss over this reality with literary obfuscations. We do that with all the capital ‘R’ realities—with thought, time and death. We treat these subjects with effusive language and timidity. Aesop’s fable of the ostrich and such. If we can’t see it, it doesn’t exist. We hide things from ourselves. Feel the bow tighten in your grip. Eppur si muove.

I don’t remember how this all started. I suppose I remember it as well as an arrow recalls its first nock, the first point on the line of infinite points it travels. Her name ended in an ē, and she had a surname that sounded like bella. It was Italian. I remember that. Her family lived on the dogleg up to our house. In reality nothing is ever Euclidean. Everything moves, nothing stops. No line is ever straight.

It was a terrible fight. We were drunk. It’s in these moments when those little incongruities of time, and our understanding of it, are revealed—moments when something truly horrible happens. Because time slows down, and mind, for lack of a better term, grows into the expanse of the now slowed time—mapping out each and every detail with surgical precision, even certain details which appear unknowable. It’s at these times that we question the structure of reality and the meaning of time, thought, and death. Because our normal intervals of time stop working in these situations, and we realize that they never really tell us how fast time is moving, how an hour can last an eternity or be gone in a second, how time can zoom in with a brutal weight that feels inescapable during meditation or boredom—as if the second hand could never move fast enough again. And if this movement of time itself is subjective or seemingly arbitrary then what we are really experiencing is the change of pace of our own perception, because all events in time space have already occurred and we are merely watching them unfurl at our own speed. Release the arrow.

It was one of those fights that can only happen to two individuals who have lived together for over a decade. That is to say we live in a deterministic, linear universe. You were cursing at me. It has already happened. It will always happen this way. I’d corrected you. You’d brought up Zeno’s paradox and before you could finish I said which. It’s quite strange how some things are predicates for others, how a single word can be a lynchpin for something other than another word. That’s how it began. You know which one I’m talking about, don’t be a fucking asshole. The famous one where the arrow never hits its target because it always has to travel an infinite number of half distances before it hits it target. I told you that the arrow paradox is different from the dichotomy paradox, and that in the true arrow paradox the arrow never hits its target because on each of the infinite number of points that you could pick on the line that the arrow draws—it is never moving, and cannot move because it is precisely at that point, and so on ad infinitum, and therefore can never hit its target. The difference between the paradoxes is drawing time into a space versus into a point. Everything has already happened. The arrow is neither moving to where it is, nor to where it is not.

You were yelling a slew of obscenities and finding things to throw at me. Well maybe this won’t hit you you sonofabitch as that hideous ceramic vase explodes into thousands of minute fragments, none of which remain visible. Things are often microcosmic, especially in marriage. I can see it moving now, as if the laws of time and space are muted. I’m out the front door now. Keys in the ignition. An arrow cannot move to where it is not, because no time elapses for it to move there; it cannot move to where it is, because it is already there. You once told me wherever you go, there you are. You were right.

There is something so safe about an SUV, something that called to me when I bought it. I could barely hear your screams as I sped away. It’s not just the height or the comfort. It’s the safety. Nothing ever stops. No lines find completion. The arrow never hits its target. I was going too fast. There are blind spots on the dogleg. I am certain that she didn’t see me. Velia—that was her last name. Less than a second passed between the sickening thud of her skull exploding off the bumper of the Explorer and the following crunch of the left front tire devouring her frail torso. Her blood over the windshield like sea spray. A clump of scalp stuck in the portentous grin of the grill. Anyone who says it happened too fast is a liar. Every point in an infinite universe is the center. She was five. She is five.

That is one point on the line. It says nothing of the other infinite points on the line, the things untellable: How Zeno’s most recent incarnation toils away as a struggling musician, somewhere in the Midwest. How I never believed in magic but at this precise moment I want desperately for something magical to happen, how truths can be both contradictory and concurrent, her name spoken and forgotten in the same breath as the arrow hits its target. A life extinguishes. Anti-lock brakes engage. Reflex assumes its token position. The chassis jumps and ripples microscopically as axles force themselves upwards and then, down again. Form always returns to self.  Wheels thud and howl, falling softly into night, violence subsiding into the thick meridians that govern human hearts. To be a line is to commit to destiny. To be a line is to always see your end and be ever hurtling towards it, never able to stop.

David Joez Villaverde is a Peruvian American multidisciplinary artist with forthcoming work in Dream Pop Press, Mortar Magazine, formercactus, and Crab Fat Magazine. He has recently published work in Occulum, Wigleaf, 100 Word Short Story, and Cheap Pop. He is a former editor of the After Happy Hour Review. He resides in Detroit and can be found at schadenfreudeanslip.com or on Twitter @academicjuggalo.

Collage also by the author.