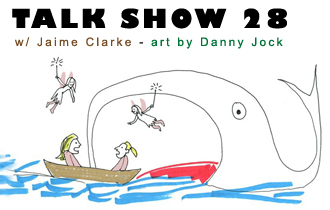 Long buried in a trash heap in Georgia are most of the presidential physical fitness awards I won as a kid during the Reagan administration. Learned back then while trying to run the mile part of the test that I had asthma; still I managed to eek it out for the Gipper.  When older and "punk", and a bit smashed, I took some of these and other trophies and hit them with a baseball bat over the backyard fence into the rear lot of the A & P grocery store.  Ah… awards.  Well in this episode of Talk Show, # 28, host Jaime Clarke talks to authors Thomas Beller, Joshua Furst, Elizabeth Graver, Dave King, and Binnie Kirshenbaum about their memories of awards, more specifically blue ribbons.  Art by Danny Jock. -CM 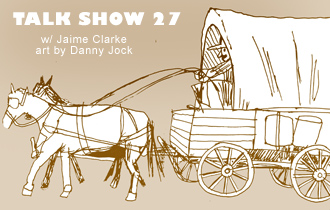 Jaime Clarke talks to authors Daphne Beal, Charles Bock, Emily Chenoweth, John McNally, Irina Reyn and Peter Trachtenberg about things from the past they might like to see return to the present (in some form or fashion) and why – from manual typewriters, to wooly mammoths, to classic Woody Allen dinner parties, to something akin to the workers movement known as The Wobblies…the answers in this episode are as varied as anyone might be expected to produce.  Art By Danny Jock. 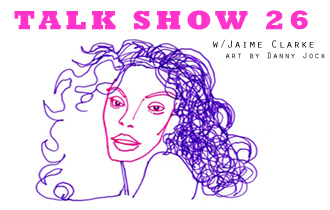 Long before buying a record myself, there were a couple of LPs I took on as my own (besides Urban Chipmunk, Tom T. Hall and yes, Peter Rock, the K-Tel stuff); 1) the first Kiss LP I convinced my dad to buy around the time their solo albums were coming out, and 2) Funkadelic’s One Nation Under A Groove (that was the one that folded out with the naked lady on the inside right?). Well I was obsessed with the art, the nakedness, the makeup (in Kiss’s case) as much as the music, and while not always a good rule of thumb (think Insane Clown Posse) often if the art or makeup is wild, then the music (your ass) follows. Here in Talk Show 26, host Jaime Clarke chats with authors Aimee Bender, David Leavitt, Dennis Lehane, Sam Lipsyte, Peter Rock, Dana Spiotta, and A.J. Verdelle about their first favorite albums. Art by Danny Jock. -CM 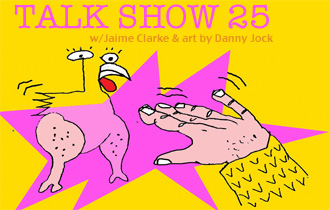 A treat and a milestone, TS#25 came in on my birthday, May Day, but is just now going up as we’re a little ahead of ourselves in the Talk Show arena. Danny’s gone bat shit prolific with the drawings and Jaime’s ever surprising with the authors he brings in, like Brian Evenson, a fave, and the amazing rest, including Lev Grossman, Elizabeth McCracken, Karen Shepard, and Absurdistan author Gary Shteyngart. The focus of the chat is a blast too, a sort of Rorschach sans the drippy subterfuge – Clarke simply asks: what’s the big "irrational fear?"  So get prepped to laugh, relate or cringe along.  Woody Allen’s sold the spiel that all writers are neurotic as hell, so see for yourself with this Whitman Sampler… 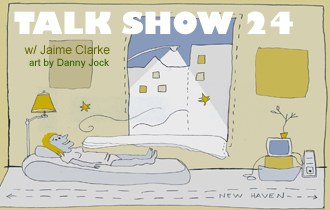 Hate to set these blurbs up with the personal (CM here), but when I think of first apartments not sure whether to count the one at the New School I dropped out of after the first semester (four of us in the dorm, each with their own addiction- booze, coke, pot and heroin, made for nice company, nobody messing with each others stuff really, except the booze…and the pot, oh and sometimes the…). Or the next in LA that I paid $200 a month for with a murphy bed, splitting the space with a friend sleeping next to me on the floor on a futon, a couch separating. Writing table in the closet was a good hideout for when the other had a date. Ah the good old days! Anyway, host Jaime Clarke talks here in TS24 to authors Leah Hager Cohen, Joshua Ferris, Alice Mattison, and Ann Packer about their first apartments. Enjoy. Art by Danny Jock 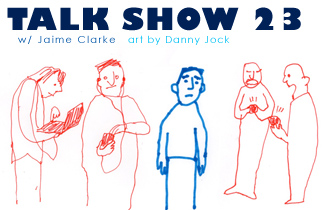 In Talk Show 23, that magical number, host Jaime Clarke gives authors Jenna Blum, Julia Glass, Nellie Hermann and Matthew Pearl a forum to bitch a little about something that they think is overrated currently, be it oh…what’s the big buzz these days? Twittering?  Or how about good old fashioned Facebook? or maybe it’s the still hottest Eastern fitness trend (hmm what could that be?) that makes a certain writer’s skin crawl. And what about text messaging? Isn’t that some rotten thing we’ve all gotten snookered into? Then there’s iThis and iThat… Answers, complaints and suggestions are all filed here.  Art by Danny Jock. 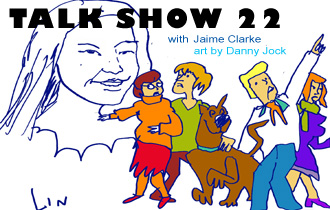 Cartoons, let’s see: Droopy, Huckleberry hound, Smurfs, Battlestar Galactica…too many to name. Could always get my own bowl of Fruit Loops at the crack of dawn to get cracked up on, but just as cornbread and iced tea took the place of pills and 90 proof for old Bocephus, I’m more soy milk and granola these days, and regretfully couldn’t say what’s on the tube Saturday mornings. Anyway, let’s see what these authors remember about their favorite toons as our host Jaime Clarke talks to Allison Amend, Ryan Boudinot, Francie Lin, Ed Park, Heidi Pitlor and Nathaniel Rich. Art by Danny Jock. 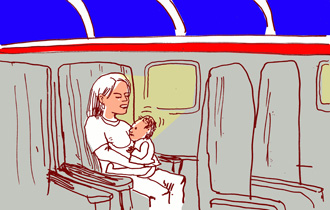 Say your mother is running for Vice President of the United States and you are a pregnant teenager, stuck on the campaign bus tending to your mother’s latest baby and brooding about your hockey-player boyfriend.  In real life, you might feel totally trapped, but in Elizabeth Searle’s fictional version, the candidate’s daughter decides someone in her life needs a plan besides ‘Mommy and God.’ The trick is how ‘Cristal’ can give mother and the national press corps ‘the slip’ and start building her own power base.  So dial back into election mode, and remember that any resemblance to actual individuals, living or dead, is purely – or maybe not so purely – coincidental. Art by Danny Jock. 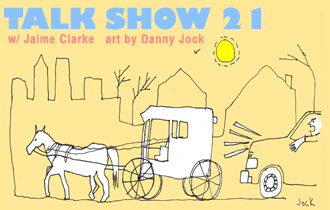 Venturing backwards in time might be a thrill if you have a certain neoclassical fetishism, a thing for late 19th century mining towns, a penchant for playing "scullery maid" and so on, but damn those fleas and lack of modern dental floss! In TS 21 host Jaime Clarke talks with authors Sven Birkerts, Lisa Gabriele, Yael Goldstein Love & Adrienne Miller about where and when on the dial they’d set their reverse-only time machines to if given the chance. Art by Danny Jock. 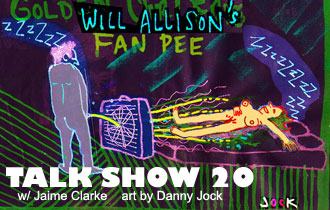 Well here’s a stocking stuffer for everyone, Talk Show 20, a nice round milestone for us here at Fanzine.  In this episode host Jaime Clarke get authors Will Allison, Rebecca Donner, Ron McLarty, & Ben Schrank to spill the beans on their most embarrasing moments.  The truths uncovered aren’t just pissing in the wind. Art by Danny Jock.