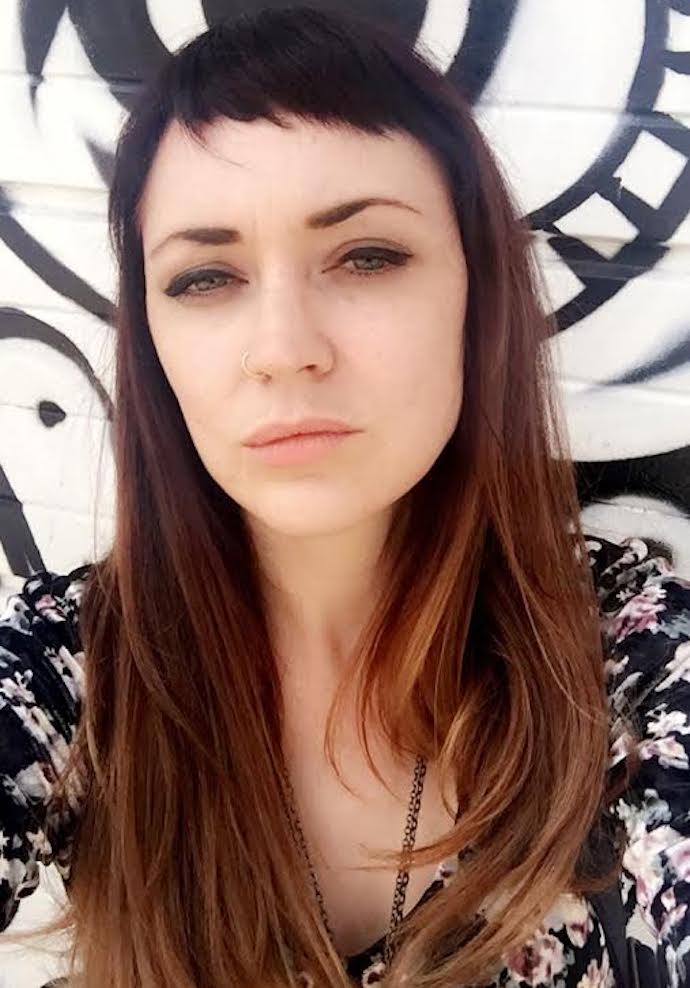 Elle Nash’s debut novel Animals Eat Each Other is a mélange of sex and violence and drug use and teenage ennui. It’s a devastating first book. In it, Nash eschews traditional teenage sentimentality for a kind of hyper-realist and psychosexual brutality—rendering a landscape and text that feels both hyper-realistic and dream-like. Nash explores her characters with both delicacy and a surgical precision, exploring their psychological complexity without giving away too much on the page.

Let me put this in perspective for you. I was reading three books at the same time before Animals Eat Each Other arrived in the mail. I am still reading those three books. I finished Nash’s in two days.

Nash was kind enough to respond to some of my questions about the book, Marilyn Manson, and what books were great in 2017. 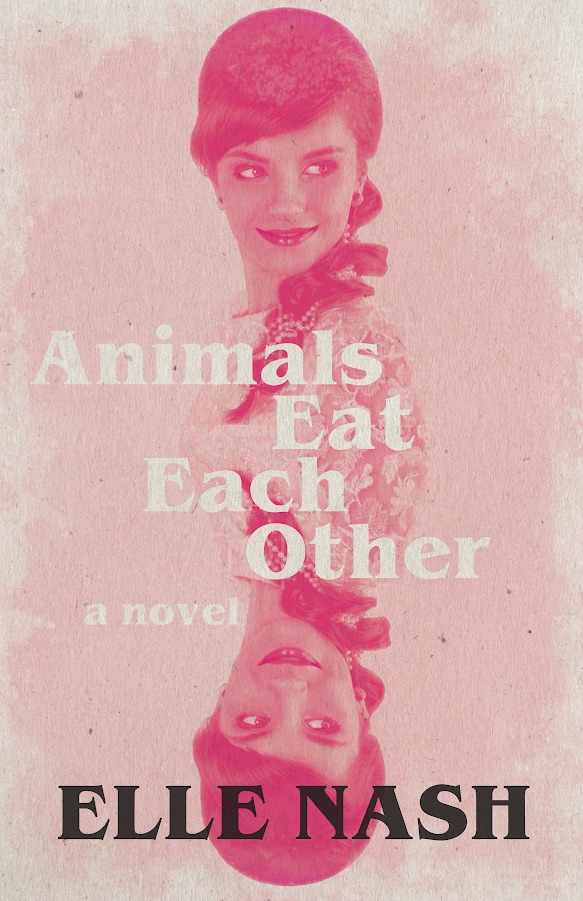 Elle Nash: I wanted to keep the narrator unnamed because her identity really was dependent on how other people saw her. Having Frankie name her was the way she took on the identity Frankie wanted her to have. She doesn’t know herself yet, she doesn’t have good boundaries, and so in this way she allows people to project their own fantasies on her because having them structure the world for her is easier than figuring it out for herself. I chose the story of Lilith in part because depending on one’s perspective Lilith can be evil— an eater of babies, someone who corrupts men—or she can be a figure of liberation, since, in the context of Judeo-Christian mythos, she is the first woman and also was created independently of Adam in the image and likeness of God the same way he was, she acted independently of Adam instead of in service to him, and as a result was punished for her desire for equal standing.

Can you talk about the chapter titles—the stylistic choice to have titles and not use numbers or just space breaks.

At first, I wanted each chapter title to be one of the nine Satanic Statements from LaVeyan Satanism, but it wasn’t really working with the structure of the book, so I just thought that some of the titles would be a good set up for the scene. I think at the time of writing the book I also felt inspired by Crappalachia by Scott McClanahan and Something To Do with Self-Hate by Brian Alan Ellis; I think both books also have chapter titles without using numbers or space breaks.

I wanted to ask you kind of a boring question. How much of the narrator’s behavior do you think is explained by or correlated to her prescription drug addiction? I wrote this question in the margins of the first half of this book, but after reading the ending chapter, I decided I wanted to ask, because I think the reader is invited into a private moment in that last chapter, where we see the narrator steal her mother’s pills, crush them up, and snort them with a straw.

I don’t think her behavior is explained per se by her prescription drug use, but that it is co-morbid. Lilith describes sex with Matt and Frankie as existing in a world that is outside of earth, and so in that way she is looking for an escape from her day to day, an experience that makes her current reality more special than it currently is. Essentially both the pills and the people are her living skinner box, she’s not ready to consider other alternatives to living or structuring her life.

Part of me thought of Frances and Matt like a cult or a fraternity. The scene where she puts the narrator on a leash and walks her through the Walmart really felt like some sort of deranged hazing technique. Can you talk to the attraction to Frankie that the narrator has, in spite of or perhaps because of her demanding and humiliating nature? The narrator tells us “Frankie was in charge. She dreamt up the world and the world complied. I liked it.” Is she attracted to the control?

The control is part of it, but it’s also that Frankie seems so sure of herself and that is really attractive to her. She’s on the precipice of being an “adult,” which requires a person to structure and order their own lives. This is something parents should be preparing their children for, and something with her mother didn’t provide, given the loss of structure in her life after her father dies. Frances has an astonishing sense of confidence that the narrator lacks. Because she believes so fully in her own self, the narrator clings to that confidence as a ballast, even if it means her own humiliation, which in some sense that she enjoys because she believes she deserves it. Sometimes humiliation feels good— it validates for her what she knows to be true about herself, and so it’s satisfying to her.

There’s this devastating scene where the narrator simply rolls a basketball over to Frankie and Matt’s young child. She’s just hanging out at their apartment. It’s rough because the reader can really see how badly the narrator wants to be part of a family—any family. She wants to be needed, to be integral. I know this isn’t really a question, but I was wondering if you could talk about this scene.

Oh, yeah. I mean, loneliness is hard. Some people are better at it than others. And it’s hard when a person feels damaged by family, but at the same time, still desperately wants family. We’re social, it’s how we survive, so I think on a bigger level, that drive (to not be alone) will always be there for people.

As the book progresses,  we begin to see the way the narrator herself manipulates the people around her: of Sam, her boss, who she uses for attention and sex, of Patrick, another friend in a relationship with a child who she uses for attention and information on Matt, and the way she purposefully wedges between Matt and Frankie. I wonder how much of this kind of behavior was already in the narrator, and how much was appropriated from her time with Matt and Frankie? Was she already a manipulative person, or did she become this way, due to her relationship with Matt and Frankie?

Manipulation is a survival tactic for people who feel powerless, so probably a mix of both having that skill set already and having it reinforced/refined by her relationship with them.

Something I really loved about the way this book ended was how the narrator doesn’t change at all. She doesn’t appear to come out of this fucked up relationship learning anything about herself at all. In fact, by the end, we see her doing drugs for (I think?) the very first time. We see the ritual of it, a private, personal action that is only alluded to a few times throughout the text. In many ways your book is like an anti-bildungsroman. She doesn’t change at all. She’s still doing drugs. She’s still calling her friend Jenny who she knows will come over.  Could you talk about your reasons for ending it that way? Did you ever think of writing it differently? With her learning something about herself or life or did you always know the outcome for this character?

A lot of people don’t change or want to better themselves spiritually or otherwise, as much as you might want them to. They do the same things over and over again,  they don’t self reflect, they blame the external world for the mishaps that befall them without looking at their role in things. Their addictions (or behaviors) cause black holes in the lives of the people around them. Many people never get real closure and those wounds can stay open forever. I wanted to write something that was realistic, which I worried about because I think that tends to be unsatisfying for people (even though some of my favorite stories are like that!)

You talk a bit about Marilyn Manson in the book, but the ways you talk about him and his work, I can tell you’re a real fan. Do you still listen to him? Did you like the new album? What do you like about Manson?

I do still listen to Manson! I’ll probably always be an angry teenager on the inside. I really loved the Pale Emperor and I haven’t listened to all of Heaven Upside Down yet admittedly, but that’s mostly because of being a new mom I just kind of have forgotten pop culture exists for the last four months, haha. At the time that the band was really getting big, besides them being a poster child for shock rock, Manson’s style really questioned the mainstream (which was big for me, my adolescence was spent in a heavily religious town), some of his lyrics are also really complex and deal a lot with family alienation, religious punishment and iconoclasm, empty consumerism, feeling like there is a bad thing in you that can’t be fixed, hypocrisy of society, etc. etc… just a lot of themes I relate to. Also the music just sounds good, and the band’s aesthetic vision from their live performances to their music videos have been profound, in my opinion.

Are you reading anything right now? What were your favorite books from 2017?

–Because They Wanted To by Mary Gaitskill

–The Day We Lost Pet by Chuck Young and Aniela Sobeski

–The Original Face by Guillaume Morissete

–Homesick for Another World by Otessa Moshfegh

–Something To Do With Self-Hate by Brian Alan Ellis