Words as Deeds, or Why a Letter from Prison Helps Me to Believe that Words Matter (No Matter What) 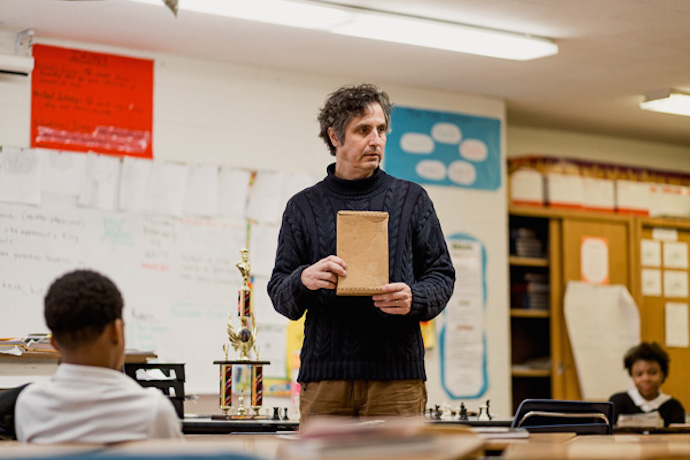 I’ve heard it said—though it turns out not to be true—that prisons in our country look to State standardized reading scores of third graders in their region when calculating the number of future beds they will need to build, or free up, to house such young prisoners-to-be.

Just the mere thought of this, the crude possibility of this invented truth—the fact that this is a fiction that feels like it could be true—leaves me shaking my head. Think for a minute about the connection that is being made here: the pipeline between literacy, or lack thereof, and time spent behind bars.

That said, I have never taught in a prison, have never set foot inside such a place. But I do teach here in Detroit, have taught writing in the Detroit Public Schools for the past 23 years, and I am lucky enough to teach third graders, many of whom, I often learn, through their writings, know people, family members, who are living inside such places.

Fact is, if I had to choose a grade where I think students are most open to the kinds of teaching that I do—creative writing, poetry writing, writing that follows no standardized rules, writing that resists any kind of figurative cage—third graders are my favorite age to teach.

This poem, I think, captures why.

If My Brain Was Caged
by Terrell Brown

If my brain was caged
I would be insane.
And growing up
would be in vain.

My brain wouldn’t be
happy in a cage.
It would want to
burst out and rage.

It’s true: who would be “happy in a cage?” Who among us would not “burst out and rage”?

I recently received a letter from an inmate at a prison in northern Michigan, from a prisoner—Fred, who is also known by a specific six-digit number—who is serving a life sentence and has turned to poetry as an act that gives his life behind bars a new meaning.

Fred reached out to me after reading a guest column that I wrote for the Detroit Free Press, a short op-ed piece called “Why Words Matter.” He was writing to me to tell me that a friend of his had cut the article out and sent it to him, “because,” he said, “I write poetry with similar content.” He went on to write, “I’m always hoping to find connections with people in other walks of life with whom I can build [a] symbiotic relationship of resistance.” Fred quoted a sentence from my essay that he especially found to be true: “To be black is oftentimes the difference between life and death.” Fred let me know, too, that he facilitates a writing workshop inside the prison for other inmates like himself who need to be reminded that, regardless of their present situation, they still have a voice that wants to be heard. “We make new poetry,” he wrote, “poetry that demands more from the political, not poetry that answers it.” He added, “We attempt to use our creative expression to support and liberate the oppressed… The prison system itself inherently needs us to continue breaking laws in order to legitimize its existence. We must demonstrate [to his fellow inmates] that putting in positive work [writing poetry] has its rewards, otherwise how can we be surprised when they return to our community and sell drugs, rob, and hurt people?”

In one of his poems Fred writes:

Here I stand firmly perplexed
In the mouth of the monster
In the eye of the dollar
I’m no scholar
But is black hoodies worse than white collar?

He writes about “Dark clouds when I brainstorm/ Loud thoughts kept silent/ One casualty of this interior riot.”

A fellow prisoner in Fred’s writing group writes in response to the question “What poetry means to me”:

it’s the key to my shackles.
set me free, free my vernacular.
let my pen write words that I wouldn’t say.
let my pen crack the code to my internal safe.

In my letter back to Fred, as a way of saying thank you, I hear you, I sent him a batch of poems written by my students, some of them third graders, and this is what he wrote back to say:

“Thank you for sending poetry by the youth. I read their poems and feel strongly that these young students of yours will never be students of mine (in prison) and for this I thank you a million times over. And I thank your students also for bringing rainbows, rose gardens, and the blue waters of the ocean into my cell today.”

Let me say it again, this time in bold: “…these young students of yours will never be students of mine (in prison)…”

But the truth is, in 23 years of doing what I do, of putting young people in situations where I know they will be successful, where I am confident that they will be able to do this thing that I am asking them to do—to write a poem. “It’s just a poem,” I hear myself say. “There is no right or wrong way to do it!”— I am sadly certain that some of the third graders that I’ve taught over the past two decades of my teaching—children who at one time sat in a classroom and looked inside their pencils with me, who believed alongside me that that they could see inside that windowless place, children who I told anything was possible, that whatever they said that they saw the world would believe it!—some of those children, now grown up, have grown up and done bad things, the wrong things, and at their worst, maybe they have—I wish I didn’t have to say it—even taken somebody else’s life. Maybe some are in prison right now, looking inside what dark place I cannot imagine. It’s probable, not just possible, that in the years since they were nine or ten, they haven’t written another poem, or seen that kind of inner light, since the well-lit days of a third grade classroom.

Sometimes, I hate to admit it, not even a poem can save or change a life. Sometimes no matter what we say or do, someone else is going to say or do something that, in the moment, says it louder, or better, or say what makes more sense than what we once said. And in the end, it’s as if what happens, what gets done, or undone, would have happened no matter what. This, of course, breaks my middle-aged heart.

It’s possible that in the cell next to Fred is a young man who once looked inside his pencil and believed in the possibility of what he saw there, who once wrote that a poem is a tree that never loses its leaves, or that love is a bird with a broken wing that still finds a way to fly. And sing.

Words, in other words, can only do and say so much. It’s our actions that count, that speak louder than our words, sometimes—though now that I’ve said what I’ve just said, I can’t help but think about these sacred words written nearly 400 years ago by St. Teresa: “Our words lead to deeds,” she wrote. “They prepare the soul, make it ready, move it to tenderness.”

Fred’s words matter to me too. They have moved and readied my soul. They are deeds that, even though they might not wash away whatever actions he may have done, years ago—those other deeds that led him to the life and the life sentence that he is living inside of right now—his words tell me that what I am doing, inside the classrooms of Detroit, is important work and that “these young students of yours will never be students of mine (in prison)…” And that, I’ve got to believe—I can’t thank him enough for saying so—matters more than Fred will ever know.

Peter Markus is the Senior Writer with the InsideOut Literary Arts Project of Detroit and is the author of several books, the most recent of which is Inside My Pencil: Teaching Poetry in Detroit Public Schools.