A House Built of Whetstone: A Review of Prairie M. Faul’s In the House We Built 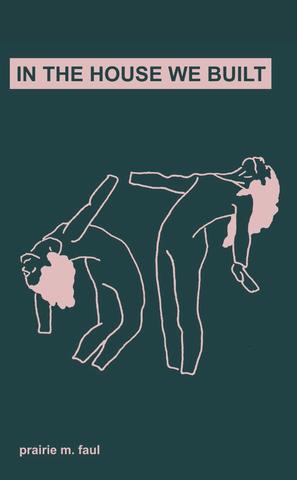 “Picture me / A field’s eruption / Collared to the city limits / Stomach knoll / Sidewalk cracks / & advancing subsidence / Aberrant growth.” The foundation of In the House We Built is comprised of lawless ground and whetstone-sharp observations. In her latest book, Prairie M. Faul envisions herself as a building, an assemblage, a network—a life-form. A form-giver living it up in a contorting “home;” a word that sometimes takes at least four seconds to pronounce. Faul’s speaker is coffee-fueled and many limbed; breaking down walls and shattering language—all in an attempt to invent a new one. Stone-hard yet extremely playful, Faul is the exorbitant solo show no gallery space can contain. In fact, space itself is what’s up for debate. Authority, expertise, aesthetic purity. Fuck all that and Adam’s rib. This poet isn’t interested in purity, but pority. AND FAUL SAID PORITY! The suffix (-ity) is there to emphasize a state of existence. To emphasize conditions under which her speaker’s body exists. Or struggles. Or subsists. We are born and we are named. But it is not all that simple because language is not all that simple. Us life-forms are porcelain, repurposed, posed, superimposed and, above all else, imposed upon. All of this and pores . . . In the House We Built!

Faul’s collection is divided into four different streams: “The first day,” “The first night,” “The sensations between,” and “The cusp of beginning again.” In this renovated Genesis, Faul’s register flows like a razor sharp current, carving up any established order, giving form to the silences of bodied spaces, overcoming. Surviving! From the onset, from the very beginning, the very “first day,” there’s an immediate distance between the poem’s speaker and the addressee. And Faul said: “I heard you in the garden.” Followed by a poem titled, “I keep saying ‘what’ even though I heard you.” And Faul’s speaker said something like desire. To walk side by side with another. Desire. Growth. And waste. And Faul said: there’s a kink in the communications system, a “noise” between the bodies—signal interference. A mind-body synthesis tries to emerge as physical properties metamorphose, as lines find themselves broken, sometimes alone in the dark. A lyric voice breaks, stretches (“the concrete stretching out / a blanket over my head”) and desire grows, as does an unhappy heaviness. The physical breaks down…

With my cement hands
I try to hold myself

Try to hold out
For growth

The breath of buildings
The rustle of sheets

…only to be built back up. Once we return to that image of the bed, it feels as though we are forced to recall the “rustle,” a moment past, now most likely preserved in the wrinkles of bed sheets. We leave the bed and we never leave the bed. As the poem continues, tenderness feels at odds with a concrete-hardness. The image of skin collides with cracked-up concrete sidewalk. New flowers grow up through the crack-up, the between-place. They grow up until they are the ‘Fuck it’ flowers of that between-place: those “sensations between.” Things accumulate—seeds and coffee beans. From space to space, Faul bottles us up. Preserves every moment, only to be experienced again later: “We take turns falling / Through the window / Into a stranger’s bed.” It’s a feeling of falling in and out of familiarity. A long, long fall into the unhomelike home. Unheimlich. A falling in and out of windows and trapdoors, until the two feel like equal sublimities. In the House We Built very much feels like a surreal piece of architecture where we constantly collide with the uncanny.

Today i decided
i am a building
At least they don’t move
2,613 miles away

As a building,
i think
i could house you

As a dwelling, Faul’s architectonic speaker desires a dweller. It’s also possible to read that dweller as both the unnamed addressee (“you”) and the reader. It depends on how one reads the “you.” Regardless, as a building, a structure—whether house, room, or gallery—Faul’s walls talk and readers have no choice but to listen. This is especially true of intelligent, punchy poems like “I Always Wake Up First” wherein two different languages of ownership (“Only a fag” versus “Trademark”; “Franchise”; “Pitch”) merge together, take over the space:

Similarly, in the poem “The Art Show,” the architectonic speaker takes on the form of a gallery space. As I write this review, as I recognize myself as a guest or dweller, I find that I am forced to self-reflect during my role, in this case, as critic:

The poem eventually subverts the role of the god-like male critic. It shuts down tradition and spits in the toxically masculine face of approval. It causes a reader to consider the walls that have beared witness and to think again about the dangers of art criticism. To ask the question: ‘who’ validates ‘what’ as ‘good’ art? ‘Who’ silences ‘who’? ‘Who’ decides ‘who’? In Faul’s poems, it is men who pose a threat to the speaker’s existence, progress. It is men who “point”, who “tie & stack”, who “hang & hold.” It is men who do “what men in suits do.” For example, in the poem, “Unbidden,” manhood is described as something tooth-like. Something that pierces, something that leaves a mark. A woman’s body finds itself caught between the addressee’s teeth. In the poem, “I dream of walking through crowds of men and wake up relieved I’m still alive,” the speaker likens herself to that of a brightly lit clavicle mistaken for a shelf on which men rest their belongings. Finally, “Keep your knives sharp, there are men in this world,” a longer four-part poem, is one of my favorites of the collection:

Here larder is hands wanting
Cradling the field without yield

A house built of whetstone
An heirloom of sweating thorns

It’s not only a smart and powerful lyric, but also yet another great testament to Faul’s poetic fortitude. From beginning to end, her use of rhyme is impressively subtle. Prairie M. Faul’s poems are multifaceted and the whetstone—the stone used for sharpening—is the skin of this stunning house of a book. In the House We Built will take you apart and rebuild you. Become part of you. That’s how creation works. And Faul said I hear you. And Faul said everything is going to be okay. And Faul said the second day! And there was morning and there was evening. And the vault called Faul the sky. And it was so. And Faul was between waters. And Faul said the first day! And there was morning and there was evening. And Faul called night the darkness. And Faul called day the light. And Faul was between light and darkness. And Faul was hovering over the waters. There was darkness over the surface of deep waters. And Faul absorbed it all. The earth was formless and empty. The cusp of beginning again.

Tags: In the House We Built, Prairie M. Faul