I’m a sucker for a short, mean book – especially one in translation, where the sentences and language tend to take on new dimensions.

Camanchaca, written by Diego Zúñiga, and expertly translated by Megan McDowell, hits all of those bases and then some.

The story follows a son along through a ride in Chile’s Atacama Desert with his father, flashing back frequently to his relationship with his mother. It opens with an ominous paragraph that seems only to describe the various cars of his father. 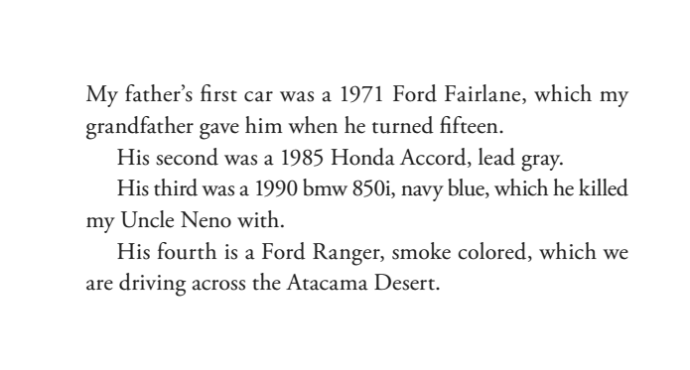 The murder slides into the sentence so casually it could be missed, but this type of bleached, stark terror is par for the course here.

As the book unfolds, it becomes clear his relationship with his mother has a gross level of intimacy, crossing unmentionable boundaries. These murky confessions are folded into the text with the same slyness as the confession of the boy’s father murdering his uncle with his navy blue BMW. You’ll find yourself re-reading sentences to make sure you didn’t misunderstand the tenor of the implications.

This tension is almost unbearable, revealed in paragraph-long flashes of heat, poverty, and the perversion of a family unit. Deftly written, there is much to admire on the page. This is already one of my favorites of 2017.

The word “pixel” is a mash-up of the words picture and element — but we didn’t always need the term. The word was invented in 1965, shortly after the emergence of color television which used electron beams to create 512 horizontal lines to display a picture. Once those lines were divvied up, the pixel was born.

But what if you could enter the world of the pixel? Would it look like some Wonkavision shit, or would it be something else entirely?

Enter Pipilotti Rist’s three-floor multimedia exhibition, Pixel Forest, at The New Museum. Each floor toyed with pixels, color, and projection. Rist, a Swiss artist, has been making videos and installations for more than three decades — and this marked her first show in the United States.

The first floor felt like a Rist warm-up: Projectors ran twin films against one corner of the room, while the other corner offered white drapes with projections that you could wander through, your shadow moving ahead of you. 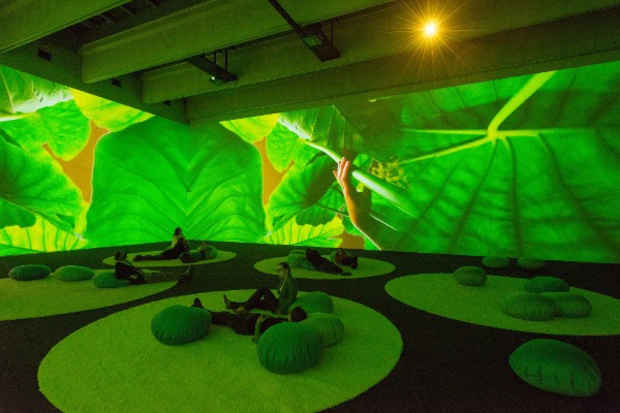 Stepping into the second floor, surrounded by strands of thick lights that pulsed and changed colors, felt like entering a new type of foliage on a new planet. Coming through the tangle of lights, you came upon a chandelier made of underwear, illuminated by swirling projections and colors.

The third floor was Rist at rest — a series of old style beds placed the visitor into repose, staring up at cloud-shaped projections on the ceiling while a perfectly picked soundtrack enhanced footage of lily pads, rushing water, and clouds pulsed overhead. 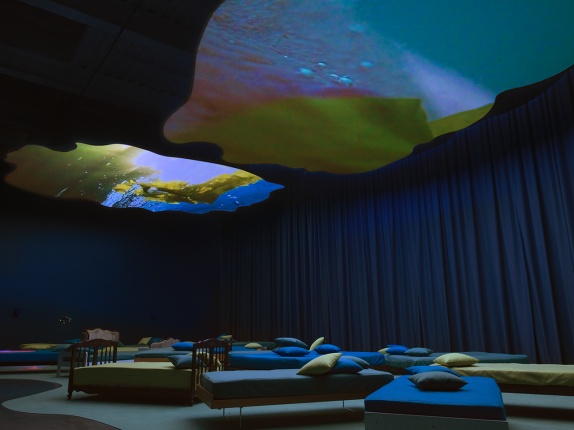 The rest of the show was just as intriguing. At every step, a new innovation rose up: A painting of a sailboat warped and melted before your eyes thanks to precise projections, triangle-shaped boxes lined the walls so you could slide your head in to view short films, a small diorama of a suburban home was backlit by ever more projections. 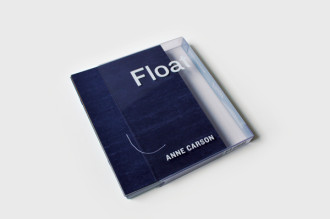 I’m rabid about Anne Carson to the point of embarrassment. Her latest, Float, features 22 free-floating chapbooks in a “glass” case that can be read in any order. The stapled chaps serve up everything from essays to translations to poetry.

The concept is, Carson-ly, exciting enough. To approach the physical object of the book feels holy or special. I found myself removing the chaps in the order they were placed first, sliding them carefully free. I spaced it out: One a day, like reading a prayer book.

Some moments are perfect. Carson’s essay, “Variations on the Right to Remain Silent,” which meditates on Joan of Arc, translation, the color purple, and Francis Bacon, is one of my all-time favorites. Especially crucial, Carson’s list of translated Joan of Arc responses to the judges during her trial:

… You asked that before. Go look at the record .

… Pass on to the next question, spare me.

… I knew that well enough once but I forget.

… That does not touch your process.

… Ask me next Saturday.

By the time she finally lays Joan of Arc’s final line to the judges on you, you’ll already be eating out of her hand.

Another place Float shines: Carson’s translations of Émile Nelligan. The French Canadian poet wrote most of his life until he had a mental breakdown, eventually dying in 1941 as a patient of the Saint-Benoit Asylum. His lines, through Carson’s translation, ache:

Our hearts are deep and void as a crater—-

My dear, you suffer,

There are a few misses. A handful of the chapbooks hit a sour note or don’t seem to jive with the others. But even reading a list of partially fake lakes of the moon written by Carson feels like an important event.