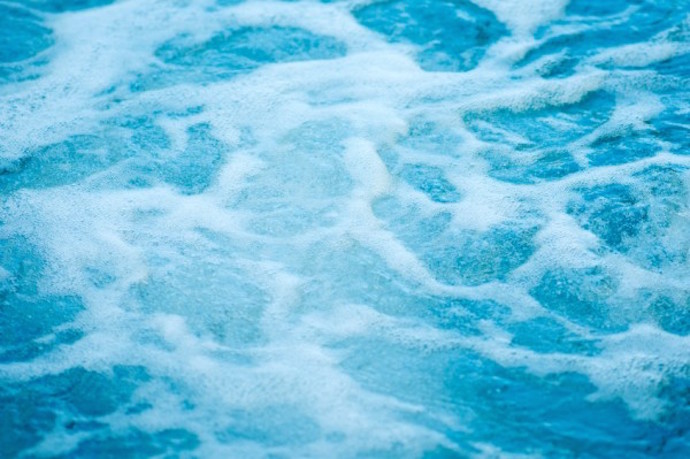 For some reason when I imagine myself talking to you, Dad, it’s always in the hot tub—that we talk, I mean. We’re in the hot tub and it’s dusk or maybe nighttime and fluorescent lights are shining up from under the water. I don’t imagine our faces or our bodies, only the hot-tub water all turbulent and foaming just beneath the surface. I see one corner of the hot tub. I see one big constant mushroom shape of water formed by the jets. I’m thinking of that thing Heraclitus said about rivers, like, it’s a constant mushroom shape but the water that constitutes it is always changing. Although since this is a hot tub—let’s say the kind of cheap hot tub where the water doesn’t filter in and out via underground plumbing, where you have to change the water yourself once in a while and maintain chlorination levels by pipetting in chemicals after it’s been used some and maybe pissed in, and it’s so well covered by a tarp (just for the sake of this thought experiment, Dad, not when we’re talking in it) that no water evaporates and no foreign particles intrude over time, so it’s a fully closed circuit—then I guess at some point in time, assuming the mixing goes on ad infinitum, the original mushroom of water, the prototypal molecular structure, will have to reform itself. Well, Dad, what if the universe is like that perfect cheap hot tub? I mean a finite amount of substance endlessly rearranging itself within a finite breadth of space. Then at some point all the possible arrangements of substance will have to exhaust themselves—right, Dad?—and the universe will have to recycle, that is to say, everything will have to happen again, and again, including our lives. What I’m wondering, Dad, is, assuming this were the case, and I were to emerge again, newborn and wailing, out of Mom’s C-section—would it really be me, you know, my soul or whatever. I guess what I’m asking you Dad is, is it possible I’m immortal?[1]

[1] By immortal I obviously don’t mean undying. I’m only suggesting that if eternal recurrence were a thing then could death be a kind of loop, experientially speaking—i.e. as soon as you die you are born again as your infant self? Except it wouldn’t really be experienced as a loop, would it, Dad, this kind of death, unless you could remember your former life, right?

But then dejá vu and all that, right …

And what if sometimes in the infinite span of time there is only partial recurrence? Like what if I am born again with exact same genetic makeup and physical shape and all that from you and Mom, but universal circumstances are completely different at my birth than they were at my birth in this life, so that that my life is bound to unfold completely differently than this one?