This Is A Book, Tina: A Review of Peter Davis’s Tina 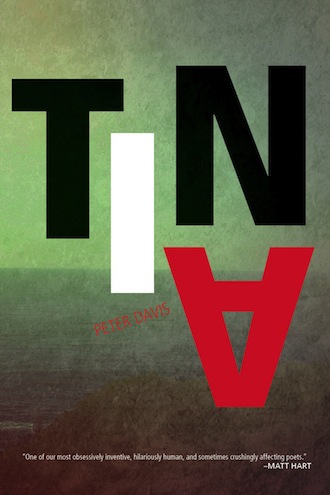 In the poem “The Alsoness of Living,” Peter Davis writes, “I find the whole event of being a person a tad bizarre.” Davis is able to successfully wield the bizarreness he/his speaker encounters in the world and present it back to the reader, who, through Davis, comes in turn to find the everyday to be strange and disorienting too. In Tina, Davis’ third collection of poetry, the speaker frequently provides clinical descriptions for things and processes that do not usually warrant such necessary explication, such as in a poem titled “Instructions On How To Palpitate Best,” which begins, “The safest way is to / allow your heart (or other / palpitation device) to / palpitate in its normal / way,” and in the opening poem, “Making Out,” where the speaker first directly addresses “Tina,” and tells her how making out works. There’s something pleasantly disorienting about hearing things explained in this flat, seemingly serious way:

First, Tina, there is some kind of talk
or isolation or something that brings
us together. Then, in some
moment, we kiss. This kiss leads to
more kissing. It is good to start french
kissing here. I mean, moving our tongues
against each other’s and having
these wide, gaping mouths.
Sometimes, when we take a break
from kissing, you might even wipe
your mouth with your shirtsleeve…

Though the speaker’s relationship to Tina is vague and shifts throughout the collection, more often than not the speaker occupies the role of educator, where Tina is presented as more of an empty vessel who needs the world explained to her, and who also frequently causes anger and exasperation in the speaker due to her seeming stupidity, her lack of self-awareness, and her “dumbfuck ideas.” The level of exasperation ranges from humorous insistence (“You’ve got to know that, / Tina! You’ve just got to!”) to verbal abuse and name-calling (“Which is what / I’m talking about, you / fucking dorky bitch”). However, at other turns, the speaker’s relationship to Tina is more tender.

For those who are familiar with Davis’s previous poetry collections, Hitler’s Mustache and Poetry! Poetry! Poetry!, they know Davis as a comedic writer, and there is a lot of humor in Tina also. However, there are also glimpses of darkness and pain in the collection. Humor emerges from flat, serious tone of the speaker, and it comes through in the casualness of the direct address to this someone named Tina. Humor comes through from absurdity, like in the poem “Emily Dickinson,” and through a youthful sincerity that Davis captures in some of the pieces, like in “Skateboarding,” included here in its entirety:

I skate for me and my homeboys!
We grind and carve!
Let’s skate! We yell that shit, Tina.
We fucking yell it!
We’re behind the grocery store, Tina,
shredding this curb and
John Law comes up and is like
Scram! Fuckers! So lame!
And I’m adjusting my beret.
And Tina, my skate Betty, I know
you love me, but I can’t
even explain how much
I will skate or die!

The humor here is amplified by the exuberant overuse of exclamation points and also the inclusion of just the right specific detail, in this case, the beret. Whether the reader was ever a skateboarder or not, this sort of expression of a past passion is something everyone can probably recognize (and maybe get a laugh from) in his or her own life.

Throughout the collection, Davis creates a masterful balance between vagueness and specific detail. The speaker frequently expresses himself through vague everyday expressions, with his frequent of additions of “or something” or “whatever” to whatever it is he’s talking about, as in “Form”: “I just don’t want to find myself in the scenario of having to comfort / you, ad nauseum, because, at some fucking party, / some dick, some whatever, made you question your identity.” Or in “Crime, Tina”:

Being a criminal is situational. Either
the situation or the act happens or
other things may happen. It’s often awfully
ambiguous. The situation or action is
often palpable but also possibly not
happening. What doesn’t happen happens
often. Often, the non-happening is happening
so frequently that you can even feel it.

Other times the intentional vagueness is more directly teasing with the reader. In “The Government,” Davis writes, “The whole problem with carney culture / can be summed up in one word. It’s not an / obvious word, on the other hand, you don’t / have to stretch too far to find it.”

Alongside poems about turkeys that commit torture and genocide, the color orange and its ability to fuck people up, and a Giant Spot of Nothing that exists in a cupboard and is the basis of a new religion, there are also poems about procrastination, depression, family, work, and failure. Many of the poems jump from idea to idea as they move line to line, sometimes almost in a non sequitur fashion, which is one of the many pleasures of these poems: the reader does not know where the poems will take him or her. Further, many of the poems seem mundane at times due to either the subject or the flatness of the speaker’s tone, but somehow they transform into something dazzling and strange.

Late in the collection, in a poem titled “Realer,” Davis’s speaker claims not to believe in ghosts: “I don’t believe that spirits live on or something / and then kind of float around knocking things over / and causing water pipes to make extra noises.” And though this may be the case, the speaker remains haunted by Tina, whomever or whatever she may be. However, he seems to be curing himself of her by the end of the book, writing a sort of goodbye to the nonsense of their relationship in “So Long,” and then a few poems later, in “The Rescue Operation,” claiming, “I am / barely thinking of Tina now.” In an interview at Front Porch Journal, Davis explained that Tina is essentially, for lack of a better word, his muse who first came to him when he was fifteen. For the sake of his readers and those yet to discover his work, I hope he hasn’t truly forgotten Tina or that he has at the very least found something else to take her place.

Tina is available from Bloof Books.