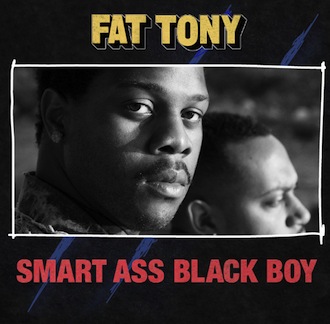 In 2010, Houston rapper Fat Tony offered a dollar to people who listened to and reviewed his sophomore album. The 11-song effort, RABDARGAB, was named after a hometown literacy report––”Read a Book, Do a Report, Get a Buck.” While his rhymes were playful, his low voice sounded slightly strained, as if he was trying to mask his age. And, after he admits that he was once a chubby brat, Fat Tony insists that he has since grown up. “Waking up in the morning, wondering what my life’s purpose is / in this lifestyle, right now, seeking that eternal bliss,” he raps in “Lotus.”

Fat Tony’s third album Smart Ass Black Boy arrives as the rapper settles into Brooklyn, in hopes of furthering his rap career. Throughout however, Fat Tony doesn’t sound as if he’s in any rush. At the start he’s tipsy off wine, and he confesses that he subscribes to a sports cliche, apparently popularized in 2004: “It is what it is, and it was what it was, and if you just do what you do, then life just does what it does.” Smart Ass Black Boy showcases a rapper who stands out, but is also still learning and refusing to take himself too seriously.

In “Final Destination,” Fat Tony references the film to sum up a big lesson he’s learned––never write off a black man too quickly. (After all, “a fat girl turned to Oprah.”) In “BKNY,” a publicity stop results in a flattering review, but by a journalist who couldn’t resist his charm. Later Fat Tony enters “Hood Party,” in which he buddies with fellow indie rappers Kool A.D. and Despot to trade field notes of gentrification over a thick bass––”even white people know that it’s a good party.” Fat Tony may talk Oprah and Houston education initiatives, but like a good friend talking warmly.

In Smart Ass Black Boy, it feels important to stay close. Thanks to longtime producer Tom Cruz, the album often sounds as if Fat Tony is either navigating a party or avoiding small talk from one room over. This feels significant too, as mainstream rappers often loudly portray themselves as the officiator, if not the main event. (“We pouring champagne, I got 400 ladies, you know what I’m saying?” Big Sean, Kanye West protege who has yet to release his debut album Hall of Fame, says in Juicy J’s “Show Out” video. “200 for you, 200 for me.”) Fat Tony may stand out, but he isn’t a show-off.

But what does Fat Tony know, anyway? The album’s best indication may be in “Father’s Day,” in which he recounts the ways in which his father rejected him and his rap career. Fat Tony also knows that he, born Anthony Obi, was a mistake (“like fondant, roll it out / like Honda, but without / a condom”). He winds his verses into a rolling rhythm, and he begins to sound a child losing his innocence, slowly turning bitter. Suddenly, he snaps out of his slight reeling and casts out a revelation.

“And it feels so incredible to admit from my skin tone to my ten toes, I am him / from my earlobes to my elbows to my genome / I can’t deny it, even if I try it.” He sounds calm, as if he’s about to fall asleep, or as if he knows he’ll figure out the rest later.