“When you come to the water / you should fear nothing” 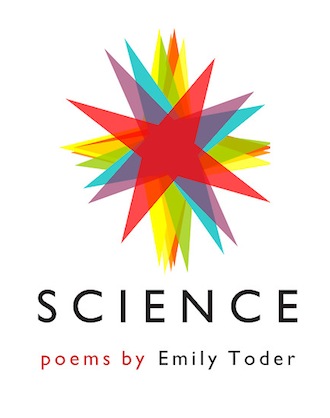 In one of the blurbs on the back of Emily Toder’s collection Science, Zachary Schomburg writes: “it’s not the killing we’ve been fearing, but the abandonment of the things that we pretend love us.” This speaks to what this book is all about, and Toder takes us on a mindscape of scientific ruminations and lifetime commitments and fears of the same. Her book rests on what she writes:

Toder writes about what might be called resignation, but she does so in a way that lets us know that she hasn’t completely given in to it. She’s aware of death, as in these lines: “A tree rocks / I think about my own dying / I mean I get to thinking about my own dying.” She thinks about death, and she’s writing about it, but her poems take us through the twists and turns of a life of the mind that isn’t not science, what we might think of as that mystery that attends to our daily lives with a fever that can only be colored over when a sheen of purity or knowingness. She gets language, and she gets what language can do. Here’s an example:

A symbol is not a neutral command
To see a numeral is to abide by myth
Counting has been seen as a myth
Mythical numerals are counterintuitive;
Consider the three
To be seen as a numeral is to immediately
be strangely precluded from nature

She tells about the things that we think of as (oddly) scientific: numbers, language, various shapes and meditative places in the mind that perhaps an accidental Buddhist would know. Her edgy knowingness is all throughout the book: “A numeral is like a fingernail piece / in the shape of a moon in that it is so quiet.” There is a deep theoretical knowledge at work here, but she even brings theory to the forefront in one of her poems, a favorite of mine:

Theorilessness is not
like the heresy we know. It is
predominantly a function
of impermeability. Thus the theoriless
cannot be swayed by properties
of probability or be made to count
frequencies.

She is able to hit right on the middle of a good theorem, or a good theory, much as Shakespearean wit would do: “we remember we know that less / indicates a lack (we know this from / other words we know).” And yet there is a seriousness that runs throughout these poems, too. Toder’s speaker does not take the world too lightly, but she retains a sense of placement and gracefulness about her words:

The book’s second section, “Brushes With,” was also a chapbook at some time, and it contains meditations on the shapes of geometry and thus a science of its own. Toder writes in one of the poems:

There’s a wryness here, and it’s an interesting turn of words that takes a Curie-esque approach, without radium, but only with the symbol’s own reasons for writing down the thoughts that do enter. There’s a betweenness that appears in these “withness” poems, much as you might expect:

As the circle ends, so we are dropped back into the middle of things, the in medias res of these lyricisms, that run together not unlike an epic might––an epic of science, though, ultimately, and its Peircean meanderings through the thirdness of words as symbolic actions. There is talk of feeling, though, and while these poems are, ultimately, thoughtful and wry, there are places where we get a little grittier:

Toder writes of geometry and shapes as one who’s been in the Symposium story that Plato may have adored––she loves words and the shapes they make. But she keeps a distance from the forms as any poet might, and while her poems are not “full” of feeling, they are meditative and intelligent, and they let us in on science as she sees it: always subjective, but with a tinge of objectivity to the story, too. As she says: “No, you are flatter / said the now very clean oval.”

In part III, she writes about “The Eyes,” a story that begs telling:

We get a hint of the physical here, though we’re still partly removed from the speaker as she takes a little bit of distance to approach the subject. In a poem a few pages over, Toder writes: “it was the culture that made me,” and we get the sense that we are experiencing what she’s been formed by. Science is not a Bildungsroman the way some books are; it’s not a coming-of-age story, for it begins one step past that, which I think is ultimately what makes the book stick. In the last poem, we get a “close-up,” though still with an irony that maintains itself with poise and appropriate ease in the face of what might be more expressive in poetry:

For once my intentions are transparent.
In my poem my feelings are exposed
but in a sad way like film.
Some of my deeds are divulged. My feelings
are explored and then they’re meditated on.
It is not uncommon for one of my dreams
to be narrated idiotically.
Then some more bad deeds are leaked.
…
In my poem my word is gold.
I mean the law is worth my heart in gold.
My golden heart is lying in the land
synonymous with law
because in my poem I have no rivals.
…
In my poem it remains unclear what they want with me.

At the end of the book, we see Toder stepping back to get, well, “meta.” She writes as if she were writing a personal poem, but clearly, she’s simply describing what a personal, expressive poem would look like. So there’s something wry here, something that is held back, and for good measure. These poems do hold back, but it’s like they’ve learned––like Toder’s learned––that saying too much is not always the healing grace it’s sometimes claimed to be. She’s learned the art of the scientific approach––a knowingness, not an expression. And it serves Science quite well.

Science is available through Small Press Distribution and Coconut Books, and through Bandcamp as an audiobook for $5.