The Sound Of My Voice Will Haunt You: Spreadeagle by Kevin Killian 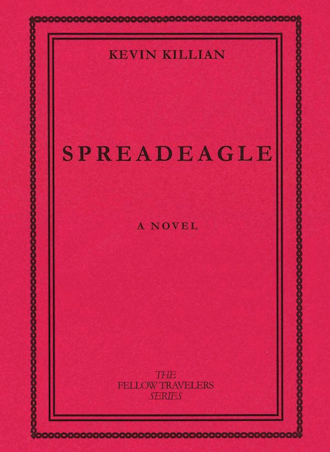 Long story short, Kevin Killian is a force of nature. A founding father of San Francisco’s New Narrative movement, he’s been quietly devouring the known universe for years, one word at a time. Ever expanding his reach across the planets of poetry, prose, drama, and more recently photography, Killian saturates each with his intellectual grace, unapologetic devotion to pop culture, and facility for turning previously unarticulated, universal truths into elegant, often breathtaking clusters of word and imagery.

His latest novel, Spreadeagle, continues the artist’s ongoing, multidisciplinary examination of the tensions between loneliness and the desire to connect, the fragile, temporal tendencies of human relationship and eroticism, the unspeakable longing for fulfillment concealed and shared by us all. The men in this book are hopelessly adrift, each compelled along in his own solitary, predestined orbit, all the while reaching out to one another, grasping at partnerships, pairings, addictions, balms—and yet ultimately unable to hold on to much anything of permanence.

“Early on when we met he kept giving me this riff about how between some men there’s a special brotherhood where loyalty and mutual aid trumps everything else. When pressed for specifics, he became vague.” (pg. 297)

Spreadeagle is divided into two distinct halves, and in the first, Killian appears to be setting the stage for a glittering, contemporary San Francisco comedy of manners. Danny Isham (born, you may remember, in Killian’s earlier work, Arctic Summer, to the great American poet Ralph Isham) struggles with a career that’s become unsatisfying, cranking out an endless series of vacuous yet Very Famous gay novels, being continuously mistaken for that Very Famous other San Francisco writer, Armistead Maupin, and living almost entirely within the shadow of his Very Famous father. His partner Kit Kramer, an activist in a post-activism era, is likewise idle and fussy at novel’s start, searching for some diversion to occupy his time and/or spare bedroom. Indeed, these are A-list faggots of the here and now, and Spreadeagle feels hot-hot off the press, packed dense with up-to-the-minute, poetic wit unflinchingly aimed at celebrity culture and the modern gay “lifestyle.”

And yet, the author’s knowing grin soon reveals itself to be that of a master sadist bearing a message from some great beyond. The arrival of art school exhibitionist and reality TV generation famewhore Eric Avery—as willing to expose his soft, emotional core as he is his bare buttocks—and his insinuation into the homes of Danny, Kit, and (real-life) author, Sam D’Allesandro, steadily strips away the artifice from the characters’ affairs. Turns out, Killian has been gearing up this whole time to guide us through a much darker, much more disturbing chamber of humanity’s horrors. One that will imbue everything that precedes with the sinister, frantic energy of impending doom.

The book’s second half, titled after the Stevie Nicks heartbreaker, “Silver Springs” (I’ll follow you down till the sound of my voice will haunt you…), abruptly transports the reader from the spotlit lives of powerful, big city gays, to the shadow-monde of their powerless, impoverished counterparts scattered across small town America, all too often driven to extreme and destructive lengths on their search for basic flashpoints of empathy and brotherhood—anything to mark the endless flow of sorrow and pornography and waiting addiction. Specifically, we are dropped smack dab into the world of Geoff Crane, our heretofore-invisible, first-person narrator. Geoff is hooked on lots of things across his half of the novel: Hollywood gossip, both old and new; crystal meth, eventually, inevitably; and the love and sexual attention of the mysterious, trailer-dwelling sociopath Gary Radley, as silent and menacing as the shriveled human face he keeps tacked above his bed. Gary Radley is Bad News with Capital Letters, dragging Geoff and the reader alike down a path of mounting desperation and compromise, fueled in equal parts by his need to consume and destroy, and by Geoff’s hunger for queer companionship and understanding.

“Ever meet a man like that, that when he smiles, your world sort of pixelates and gets smaller, both at the same time? Maybe everybody has, but I had never had anyone, not really.” (pg. 380)

By book’s end, Killian has merged both worlds in a way that is enlightening and complete. What’s more, he allows (some of) his characters to escape from their circumstances, and their acquired insight is recombined with a newfound sense of urgency, a sudden coalescence of purpose. Such things, however, come only at a cost in Killian’s cosmology, and almost no one walks away undamaged. Perhaps because of the immediacy of its brutality, Spreadeagle reads like a signal, a shot, a warning—its two far-flung halves on an inevitable collision course toward one another—of the end of times upon us, an approaching Judgment Day when our words, our deeds, our blood-spattered apartments will be combed through and tallied up and meted out. Killian prophesizes that, sooner or later, our good works must come to hang in the balance of our bad. Until then, he warns, our own executioner may already be on the loose.