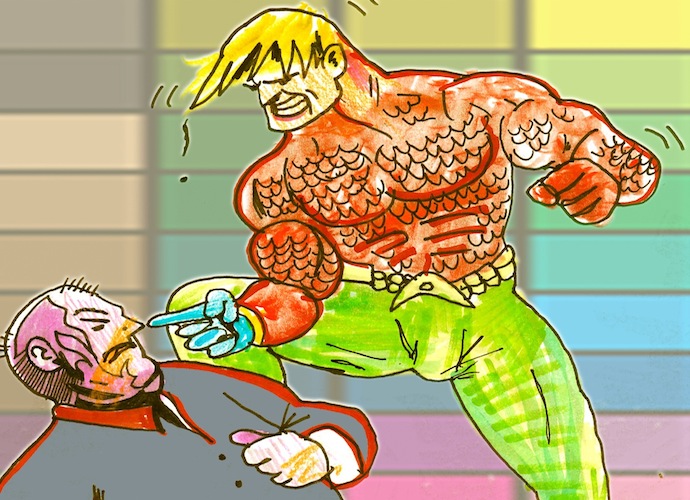 Spider-Man versus Les Assassins des Fauteuils Roulants from Infinite Jest: J. Jonah Jameson paints Spidey as beating up on the disabled, and Peter Parker furnishes the photos for it.

The Great Gadzoo in a brawl with Cthulhu.

Oscar Wao in a swordfight with J. Alfred Prufrock over Daisy Buchanan. Daisy does not care about either man, but she is excited at the attention nonetheless.

Rabbit Angstrom and the aliens from Space Jam square off against Kenny Powers and the Harlem Globetrotters––in Calvinball.

Scully and Mulder accidentally kill Nick and Nora, and have to figure out what to do with the bodies.

Spiderman versus the recession.

Vladimir and Estragon get big into podcasting.

Garfield goes to the Interzone.

The Flintstones go to the Interzone––giant bugs and talking anuses work as construction equipment and staplers and say, “It’s a living.”

The Poppers from Peter Orner’s Love and Shame and Love have a picnic with the Glass family. Everything goes great until the Wolfman shows up!

The Green Lantern versus the outside world.

Aquaman versus my former boss.

Tarzan kicks the shit out of the way I feel when I look into the blank space under “What I Do On a Typical Saturday Night” on dating profiles.

Swamp Thing defeats the smug, questioning look people give you during job interviews, as if to say, by giving you that look, “Oh, please explain further, crazy person,” as if it’s like that unreasonable to have had to take some time off work from 2007-2009 on account of all the emotional stress incurred and whatnot.

My Little Pony versus Night of the Lepus.

Night of the Lepus versus lupus.

James Bond enters a clinic for exhaustion and makes out with all the nurses.

Nicolas Cage’s character in Wild at Heart finds that he can’t finish reading a single book from his childhood without getting misty-eyed at best because he remembers how inconsequential the struggles, how unconditional the love, then.

Harry and the Hendersons learn to use the force.

FDR and Hitler settle World War II with a drinking contest. Churchill has to sit out because it would be unfair.

Bush and Saddam settle the Iraq War with a weed-smoking contest.

Episode 36 of The Seinfeld Mysteries.

Animal and Miss Piggy find themselves really capable of having a mature and fulfilling relationship as platonic friends.

Pee-Wee Herman gets fired from Good Burger for repeatedly calling his coworker, Beatrice from the oeuvre of Dante, late at night and begging her to read a short story he wrote, after which Pee-Wee resorts to living in a fantasy world––an actual fantasy world!––populated by totally original characters, who ultimately teach Pee-Wee to embrace work, solitude, and adulthood, no matter how painful they may seem. I think that one’s my favorite.