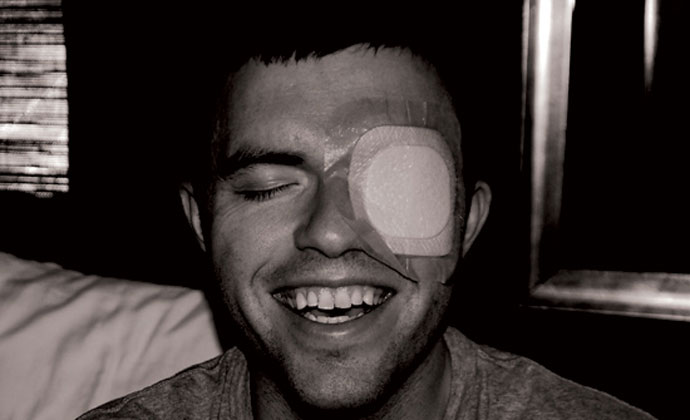 I am reading Scott McClanahan’s Collected Works Vol. 1, pretending my friend Jeff is reading it instead of me, but he won’t, so I’m reading it.

I saw Scott again when he read with the Summer Southern Comfort Tour at Beep Beep Gallery (presented by Solar Anus), but I didn’t say hi. I like to pretend that social conventions erase the sincerity of the action, saying “I came to hear you read because it’s amazing to hear you read” makes showing up and hearing him read trite. Sometimes you just want to be there and have everything else implied.

Sincerity frightens people, and so does affection. Forthrightness. That kind of love that is neither sweet nor saccharine, but terrifying. It’s like looking straight into someone’s death, that’s the digest version “what love is.” Looking into someone’s eyes like you’re looking into their grave.

Other people find these stories hilarious. My friend Jeff finds them hilarious, slaps his thigh, throws a bottle off the roof into the yard (we are reading the book on the roof at night, there are stars and chemtrails visible even though we are in Atlanta drinking cider and he’s wearing a costume that involves a black hat with a wide brim and a headband that has long tails that whip back behind him when he rides his scooter). Maybe I don’t have a sense of humor.

Today my sister came home and told me about her friend who lives in the cuts (so much so that he was attacked by a pack of wild dogs over the weekend). Today, a man in a Uhaul abandoned 20 or so emaciated pit bulls on his road. The friend called the ASPCA, the sheriff, animal control––no one would help. He gave food and water to one sweet female he was considering keeping when another scrawny dog came up, and in an attempt to take her food, bit her nose off. She was the only one there to be shot when the sheriff did come, because she was the only one sweet enough to stick around.

Today I woke up hungover and hurting to take Jeff to the hospital because he doesn’t have health insurance so he has to go to the ER to get medical attention because he can’t afford a clinic or to pay his ER bills, ever. He woke up late because he was so tired from working the night before and I didn’t have the heart to bully him out of bed because he’s been feeling so badly, it hurts worse when he’s sober, so I let him sleep and then he let me sleep and by the time we were both awake it was too late because he wanted to see his son that afternoon. It would take at least three hours to be seen, and at least two hours in an exam room, and he didn’t have long enough to be seen by a doctor, and he would have to wait until his next day off to spend it in the ER. Then his baby mama cancelled and he didn’t get to see his 16-month-old son either.

Two days ago, the close friend of my close friends, friend of many of my friends, devoted husband and new father, who worked two jobs to support his family, decided to drive a friend’s motorcycle in a circle, right before work at 4 in the afternoon. He got half a block before he lost control of the bike and ran headfirst into a tree. His heart stopped twice in the ambulance. During surgery he started bleeding out of his nose and ears from a brain hemorrhage and died.

I took my friends out to get wasted, because they needed a break from crying, because what do you do. Fight death with death? Jeff gets wasted to stop hurting, to stop the anxiety of hurting, the anxiety of trying to take care of his baby and himself. On my friends’ refrigerator there once hung a note I wrote one night that read: Everything will get more horrible but I love you. It comes true every day. There is a counterpoint to that note, in the same vein but on the opposite end of the spectrum, a photograph I took of some street art in San Francisco, somewhere in the Mission where I was walking with someone I loved, and it reads: Let go lightly.

Last night in a dream I was thinking about how the friend died, the friend-of-a-friend I mentioned, I was thinking and walking with a friend of mine through a landscape that was grassy but also evocative of public school. I noticed my skateboard (Jeff had a dream that he was too scared to skateboard down a big hill. He saw me go to the top of the hill and he wanted to stop me, but I skated down like it was no big deal) was at the top of some steps, I thought I’d better move it so no one got hurt. I stepped over it and fell backward down the steps, headfirst. My eyes took a snapshot of the sky, tree-horizon, deeply sepia toned. All sound went out. I felt the calm that washes up when you know you’re going to die and your chemicals make you feel okay about that, like you’re part of a big ocean and also floating in it, then I became aware of the quality of calm and struggled against it because there was also the thought that I should feel urgency or fear and I wanted to see the people I loved, I wanted to tell them I loved them and it was okay but I couldn’t talk and I couldn’t hear. I realized that the sweet-tea view up the steps had not moved this whole time, I realized I might already have died. I realized I had already died.

I am pretending that these are stories by Scott McClanahan and not real life, or at least the life that happens to someone else, to someone like Scott McClanahan and not to me, so that when I cry after every short story I can put the book down, drink some coffee, look at strangers and speculate how many things must be happening to them and how nice it is that nothing ever happens in my world of perfect calm. The things that happen to Scott, I mean to his protagonist Scott, get turned into lightness and uplifted. Every story is a lump under the skin that you slather with turpentine so that the infection boils to the surface and can be dispatched with cleanly in the shower. Catharsis.

It hasn’t happened yet; I will read the book again until it washes me clean, or until Atlanta floods and carries me away, which is increasingly likely, thank God, or something else either small and redemptive or so large it is automatically symbolic occurs and restarts the process of life. Not everything is a platitude. Every kind good thing we try to do, every time Scott sings a spiritual along to a handheld cassette player, every absence just illuminates what remains.