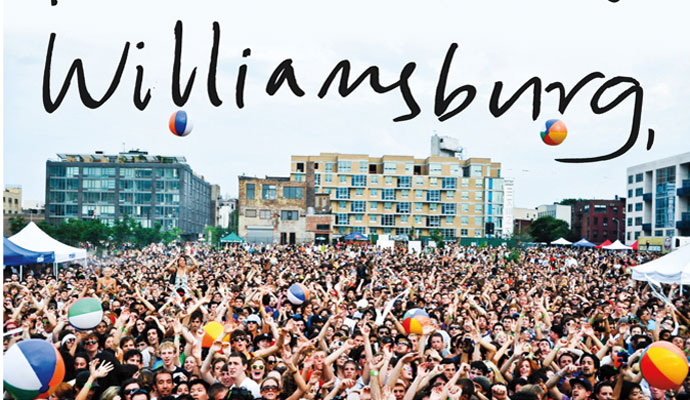 I picked up Robert Anasi’s newest book, The Last Bohemia: Scenes from the Life of Williamsburg, Brooklyn, last week, just in time to remind me of another summer I wasted in the neighborhood was nearly over. Wasted the summer working. Wasted the summer drinking. Wasted the summer waiting. And out of this wasted summer nothing has yet come out of it, but out of Anasi’s Williamsburg comes a book about the people living in a neighborhood long considered a wasteland, a frontier of abandoned industry, a place to dump bodies. Life changes fast, and few places have transformed as quickly and dramatically as Williamsburg in the last twenty years. Hell, if you left five years ago you might not even recognize it now.

His Williamsburg life started in 1988 with a house party and a message: “Walk quickly from the subway to the loft. Don’t look at anyone. Don’t come alone.” His company was one of artists, writers, musicians, struggling actors, drug dealers, street thugs, Polish landladies, and coffee addicts. His hangout was the L Cafe, which, like many places, no longer exists, before moving to Verb, which does still exist, when the L closed. Anasi’s world is full of characters who move in and out of his haunts and his apartment on North 8th, and he treats their vignettes and stories with a surprising sensitivity that comes with bittersweet memory. There’s Marcin, his downstairs neighbor in and out of whose apartment come skaters and models-turned-heroin addicts, there’s Frank the Bum, there’s the other Frank, there’s Gerard Smith, the worst barista in Williamsburg and bassist for the band TV on the Radio. There’s the industrious Napoleon, whom Anasi met at the L Cafe, who opened a cuts and fades barber shop and the Black Betty bar on Metropolitan and Havemeyer––now it’s known as the Commodore and it serves fried chicken.

Kokie’s gets a short section as it should in any conversation about the old Williamsburg. Kokie’s used to sit on the corner of North 3rd and Berry Streets, and widely renowned in all kinds of tales about its reputation… “If you lived in Williamsburg you heard about Kokie’s. ‘It’s a coke bar that opens Thursday night and doesn’t close again until Sunday afternoon.'” The draw to Kokie’s was that you could go there and buy a bag of coke from a little window in the back and there were tables with curtains around them to do your blow. There was also a dance floor: “…cackling middle-aged Latinas with high heels and big asses, a group of young Poles with buzz cut, two guys in dusty overalls who looked like they had just gotten of a factory shift, and a couple of artist types with their sideburns and thick-framed glasses. It was an ugly room…” Everyone who went there has their story of Kokie’s. A co-worker of mine claims to have The Picture that got Kokie’s shut down: one hand with a twenty in it, his outstretched palm with another third hand in the frame placing a bag of coke in it, taken by his ex-wife moments before they got rushed by the staff.

For the most part, Anasi avoids the easy lamentations that come with being flushed from one’s own neighborhood. Williamsburg is a rough ‘hood no more. Everyone knows the Williamsburg of now: the giant music festivals and outdoor movie screenings, the strollers and young parents everywhere, the trust fund kids, the mustache and tight pants jokes, the rich bums, the ironic ambiguity, the multimillion dollar condos where an empty overgrown lot once had peace. The cover of The Last Bohemia itself is tribute to this old Williamsburg, contrasted with the new wave: looking out toward Manhattan from the junked out lot on North 8th Street with a graffitied, abandoned car in the foreground, versus the opposite shot, back to the East River, looking out toward a massive crowd of 20-30-somethings at a waterfront concert, beach balls bouncing along the thousands of heads, new condos in the background. It’s a huge and dramatic change, and the short years during which this shift occurred might only be compared to the rapidity of the Chinese. After 175 blocks of waterfront were rezoned in 2005 from an industrial designation to “mixed-use” it was all but over for Anasi’s version of Williamsburg. “The stampede favored the strong, although strength in the case of the Greenpoint-Williamsburg land rush meant money and lawyers rather than Winchesters and Conestogas. In both cases, natives and old-timers like me scratched our heads as the future trampled us.”

It’s certainly different now––the rents are too high, there are too many people, it’s too hip for its own good––but I doubt I could find someone who would wish a return to the old days when you couldn’t walk down the street alone. Most people, myself included, would rather choose getting your phone stolen over getting shot, or navigate the crowds of weekend Brooklyn Flea Market tourists on Kent than step over dead people on the sidewalk on the same street. We’ve traded a gritty exclusivity for safety and a different kind of exclusivity that’s financially out of reach for most of us, but we’ll still take it nine times out of ten. If it’s better is debatable, but I don’t think anyone is genuinely wishing it was back to the way it was.

Before Williamsburg became the hipster capital of the world, Anasi had free reign over the Northside waterfront along the East River, the long-forgotten and neglected stretch of property littered with stolen, broken down cars, weeds, abandoned train cars, trash, and a retreat from daily rigors of hustling up a living. Anasi’s waterfront predates my own, but even four years ago the same waterfront had the same secret appeal––you always knew there was a hole in the fence somewhere, that someone had been there before, and there was a place you could call your own for a little bit away from everyone else to enjoy the scenery across the river and soak in the solitude. Those places are all gone now, at least in Williamsburg. Greenpoint to the north is the last holdout, but its days are numbered as well. Transmitter Park, at the end of Greenpoint Avenue along the East River, opened this past week and is the first part of another 50 acres of waterfront parkland coming soon. The land is still there and open to the public as long as you come during open hours. There’s a fence around it all, but there’s no hole in it this time.

“Yoga moms pushed strollers, the rangers kicked you out at dusk and you couldn’t ignore the curfew, not without going directly to jail,” Anasi writes. “You couldn’t jump the fence and hide from surveillance cameras, either: there was nowhere to hide––no tall stands of cordgrass, no abandoned buildings, no thorny bushes. It was just a park, green and sterile, with one species of plant––Kentucky bluegrass––and one species of bird––the pigeon…. Anyway, you wouldn’t want to go there after dark. There was nothing to stumble into, no piers, no danger, no mystery.”

This is where I can relate to Anasi the closest, where I can understand his resigned passion when he writes of his old neighborhood. These were the places I sought out for different reasons as well: a hidden spot to drink beers and watch the city twinkle silently across the river, a secret fishing spot, a place, however temporarily, you could call your own in a place where it seemed impossible to own anything. Breaking and entering and trespassing were all part of the secret story: the last vestige of the shipping industry is the Green Street pier where I used to fish a couple years ago, running over the rotten planks, ducking from the security guards, climbing under and over fences, hopping over giant holes in the boards, all the way out to the end where the fish and quiet was. It was a view of the Empire State Building from an angle you could only get from that particular bend jutting out in the East River, a sight only you could have, only you who were there.