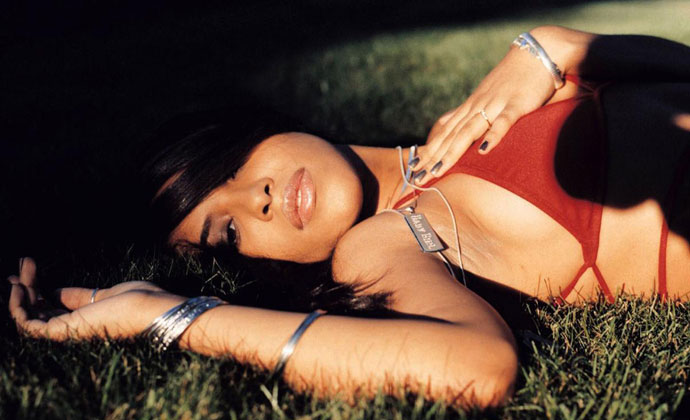 Why Aaliyah Is More Than Enough

Her voice catches air like a plastic bag in an updraft. “So tell me whatever you’d like me to do to help you / help me help you,” she sings. First, he brings up his recent trips to Manchester City, London. Then, he replies, “Bothers me when you gotta play therapist, that shit’s embarrassing / to even bring up these n—-s, make the comparisons.” Drake is answering to Aaliyah––more specifically, a previously unreleased vocal track from before her tragic death in 2001. She sounds heavenly. He sounds pissed, because evidently for every million he earns, he gains an enemy or a cousin.

“Enough Said” is the first track off a posthumous Aaliyah album overseen by Drake and his producer-in-crime Noah ’40’ Shebib, greenlit Blackground founder (and Aaliyah’s cousin) Jomo Hankerson. However, the ambient song also makes for an awkward conversation between Drake and his muse, who he never even met. Just as chefs learn the mechanics of cooking through recipes, Drake has apparently studied Aaliyah’s music closely while learning how to sing on his own rap songs. He’s even interpolated her melody from “I Don’t Wanna” in his own “The Real Her,” off sophomore effort Take Care.

But “Enough Said” sounds more like a song off Drake’s 2010 debut Thank Me Later: “Unforgettable,” where Aaliyah’s tender cover of the Isley Brothers’ “At Your Best (You Are Love)” leads to Drake chatting with his latest fling, complaining about the paparazzi. Whether on a solo album cut or on her own posthumous track, Aaliyah’s singular voice has only served to support Drake’s braggadocio.

Aaliyah was 17 when she released One in a Million, and she was 22 when she released its followup––her eponymous album, also her third and best. Aaliyah never wrote a song, and up until then, she was sure she never would. But while Static, from ’90s R&B group Playa, wrote nearly all of her songs, Aaliyah still made her point-of-view known. In “Loose Rap,” she coyly shrugs off a guy without game and crews less superior to her own. (Missy Elliott and Timbaland, she was talking to you.) In “I Refuse,” her voice swells as she repeatedly reminds herself of when he (whoever he is) walked out and how she fell to the floor, as if fighting her compulsions to chase him. And in “We Need a Resolution,” Aaliyah casts out question after question (“Am I supposed to change? Are you supposed to change?”) to Timbaland’s twitching beat, before her producer-in-crime resolves to call her tomorrow. Aaliyah is about wanting and deserving more, often after being cheated. She sings of devotion, but with the sense that it needs to be earned.

By itself, Aaliyah’s voice sounds weightless. In “Enough Said,” her voice coasts through the near-same, groggy production that 40 cued up in “Marvins Room,” which  heightened the sense of insecurity lingering within Drake’s drunk-dialing verses. “I don’t think I could ever relate to the life of a multi-millionaire rapper, but Drake makes it easy for me,” Kim Hutson wrote for Unbest, a collection of user-submitted, year-end essays about impactful music. “It honestly sounds like Drake is more fucked up by change than I am, and that’s really comforting.”

But when set to Drake’s confessional comfort zone, Aaliyah’s voice sounds removed her from her own, with nearly all of the pathos in her voice washed away. See, when paired with Timbaland’s stuttering beats, Aaliyah’s voice took root and unfurled like sprouts from soil––fed off the confidence, even sexiness that she found within. And in Aaliyah especially, the singer challenged herself to sound like a pillar of strength. In “Never No More,” she seems to gasp through these flashes of recollections (“I thought I lost you / when you twisted back my arm”), only to force out her resolution of a chorus. And in “I Care 4 U,” Aaliyah starts to calmly offer her ear and her presence, though when she sings, “I’ll come, I’ll come in a hurry,” the desperation in her voice heightens as if the situation’s urgency is starting to sink in. Missy Elliott originally wrote “I Care 4 U” for One in a Million, but it’s hard to imagine Aaliyah singing this at 17, this song about the woman being the backbone of the relationship — or, to have any other song serve as the title for Blackground’s first posthumous Aaliyah album.

Aaliyah learned to choose her words as carefully as the songs she’d represent––these graceful stories about summoning her strength. Meanwhile, especially after Take Care, Drake was often called soft for essentially attempting to follow Aaliyah’s lead. “There are people who really hate me and everything I stand for, like, ‘He’s so soft,'” he said to The Guardian. “But I’m not soft. I’m just not one of those people who’s closed off emotionally.”

Drake may be frank, but he is also only taking Aaliyah’s music and legacy at face value. “Enough Said” is the first new Aaliyah song in ten years, in which he faces his biggest inspiration head-on. And at this crucial moment, all he could muster were these mentions of his soccer player friends and the brand of his watch, because he “still ain’t got the time for a bitch to be acting iffy.” Comparing Aaliyah as she left us to “Enough Said” is to compare an artist who’s reaped stories and strength in her womanhood and an artist who’s diminished her legacy to a pretty voice.