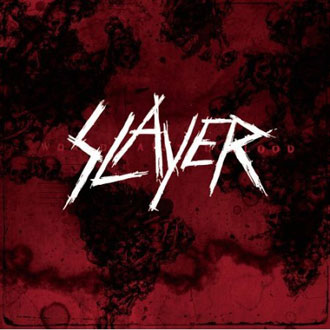 A voice in the wilderness Slayer is. Long time fans noted the creepy serendipity of the release date of God Hates Us ALL (September 11th, 2001). For many it became the soundtrack of the bellicose past decade. Christ Illusion punctuated this and perfectly presaged the “Surge” era, and now as attention returns to Afghanistan and on, Slayer rises again with a new LP––World Painted Blood––reminding fans that as much a we’d like to think things have changed, so much remains the same. Blood still paints the Earth. Of course these guys are on their own Lovecraftian plane of insight, riffage, and operatic metal glory (the arias of which are in the guitar solo battles ‘tween King and Hanneman). So what’s to say? It kicks. To quote Jeff Hanneman: “At this point I think a Slayer album pretty much speaks for itself.” The LP comes out 11/03 and is on their myspace page complete until then.