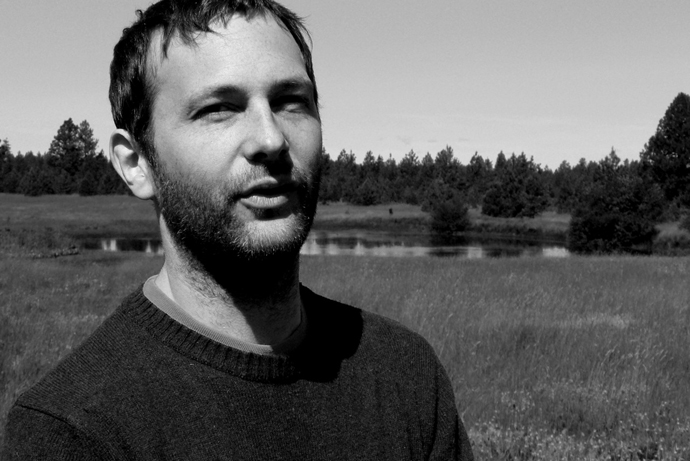 Jon Raymond is in many ways a quintessential Pacific Northwest writer.  That’s not to say his stories and novels can be reduced to local color or are alienating in their regional focus. The Pacific Northwestern environment is so woven into the content of the stories that they couldn’t take place anywhere else.  That said, the personal dynamics at the heart of his work can easily be located in any of our lives.  This is true of his novel The Half Life, his short story collection Livability and his screen work for Kelly Reichardt.  Both Old Joy and Wendy and Lucy were based on Raymond’s short stories, while Meek’s Cutoff was a collaborative effort.  Though his recent work with Todd Haynes on the mini series version of Mildred Pierce is set in Hollywood and is a very loyal adaptation of the James M. Cain novel, this too is a story where location and character motivation are inseparable.

Rain Dragon, Raymond’s latest work, centers on a young couple that leave Los Angeles and move to an Oregon organic farm to reinvent their life together. Quietly paralleling the tension between optimism and delusion inherent in Damon and Amy’s affair, Rain Dragon also follows the peculiar growth capitalism can sway from idealistic roots – in this case, as the cooperative farm learns to articulate its production philosophies, it also learns that marketing ideals are far more lucrative and fertile an endeavor than selling products of the soil.  There is a low-key irony in Raymond employing his familiar intertwining of person and environment to examine the pitfalls of entering unfamiliar territory.  From its damp, predawn opening where the appearance of a ghostly owl throws a superstitious pall over Damon and Amy’s arrival; to the sunny daily rhythms of the farm that transform its workers from eco-conscious idealists into holistic motivational speakers for major corporations, Rain Dragon charts the intersection personal vision and personal blindness with the physical and emotional contingencies of place. In an early scene the workers contemplate the origin of Rain Dragon, the farm and company name.  Personal interpretations and vague speculations on mythology are offered but no one is quite sure of the term’s roots, meaning, or even its commercial purpose. This scene perfectly encapsulates the contradictory ground covered by the novel.

No doubt, Jon Raymond is a busy man.  Still, despite the  new novel, new screenwriting projects with Todd Haynes and Kelly Reichardt, and raising a family with fellow author Emily Chenowith, he remains one of the most visible and personable members of the Portland literary community.  Recently on a typical rainy Portland night––the kind of Pacific Northwest night he evokes so clearly in his work––Jon was kind enough to meet at a pub and discuss what it means to be a writer working between the page and the screen. –DM

DM: How did you enter the field of screen writing? Was it always an interest alongside your prose work?

JR:  I was always interested in movies, I think, yeah. But I figured out pretty quickly I had little aptitude for the technical part of filmmaking. The reality of wrangling gear and raising money was just too daunting. I turned my sights to fiction––though my first novel The Half Life did end up involving a plot-line about two teenage girls making a movie together. Anyway, in the weird way that things always work out, Kelly Reichardt read that book and liked it and asked me if I had any other writings that might be adaptable. She had a small amount of money and was ready to make a film. The only thing I had was a story called Old Joy, and incredibly she liked that, too. I never really expected she would actually make the movie, but sure enough, she did, and through our collaboration, and my work with Todd Haynes, I’ve had some hand in screenwriting ever since.

DM: You said you wouldn’t want the screen writing without the novels and stories –For you, what are the essential difference between script and prose writing?

JR:  In prose, the goal is to create a continuous breath through your words. You move from sentence to sentence, paragraph to paragraph, chapter to chapter, and find some way of maintaining a spell. In screenwriting, though, you’re just asked to kind of slug in outline headings and a few little bits of description, and worry mainly about dialogue. That’s an oversimplification, obviously. In screenwriting you have to worry about structure and “beats” too. But on the whole, prose is just a gigantically harder proposition. The making of decent sentences that lead to the next decent sentence is really among the hardest things I’ve found to do. And consequently, more satisfying in the end. It’s where I feel like I’m really testing myself in the biggest way.

DM: So how do you negotiate  the lack of descriptive space in a script and the challenge of the narrow form?

JR:  Movies are a genuinely collaborative art form, with so many talented hands going into even the simplest film. Most of the people who actually do the work of filmmaking are interested in bringing something of themselves to the project in question. They don’t want a script laying out every little detail, you know? They want a nice, clear document that gives them room to make their own decisions. So the lack of descriptive space seems practical that way. The trick for the screenwriter, I guess, is to utilize that little space in a way that’s evocative, and that creates opportunities for the crew to do their own things in the best way possible.

DM: There is a very private, very controlled place in prose writing where an author is in a relationship with his or her own language, and the spoken language used by characters. For you what happens to this personal space when you write for the screen as opposed to the page?

JR: Yeah, that’s an interesting question. I guess I don’t view the language of screenplays as quite the aesthetic object that I do the language of fiction. Screenwriting is a practical pursuit, like making of architectural blueprints. That said, I’d make an exception when it comes to dialogue. That is a more artful thing in my mind. You don’t want the dialogue to merely approximate what you want to say. You want it to be as precise and alive as possible. For me, the musical quality of prose comes out the most in the dialogue, for sure. And the way the actors end up interpreting it, contrary, perhaps, to how you hear it in your own head, provides some of the more interesting surprises along the way.

DM: When you look at the films Old Joy and Wendy and Lucy, how do feel about the stories from which they are drawn?

JR:  I still have a lot of affection for those stories, each in different ways. Old Joy was really the first story I wrote that felt presentable to me in some way. And even though I look back at it as a somewhat early effort, I still think it reads pretty decently. With “Train Choir” (the story that became Wendy and Lucy) I think about Kelly a lot. I wouldn’t have written that story if not for her, and there are elements of it that were invented specifically for her needs, and with her as the primary reader in mind. That gives it a strange, special place in my head, for sure.

DM: Is it difficult at all to give over a story to the collaboration?

JR:  Not for me, but that’s partly because I have this other writing, too. If I didn’t have stuff I was working on that was solely my own, I might find the collaborative process more stressful. I mean, it can get stressful anyway, but it would be worse.

DM: There must be some serious differences between reinterpreting your own work for a script and working on original material with directors like Todd and Kelly? Is one more challenging than the other in terms of balancing personal voice in the collaboration?

JR:  Yeah, an original screenplay is a weird thing. With the first two Kelly movies, the stories were always there and I never had to worry about balancing anything. The movies were like this extra frosting on the cake. With the last one, Meek’s Cutoff, I did have to contend more with that feeling of possessiveness. It was maybe a little harder for me to just politely walk away once it left my hands. But whatever. It was never such a big deal. With Mildred1, we were adapting another person’s book, so the personal voice questions didn’t so much apply. We had all the characters, the settings, much of the dialogue. We had to fill a lot in, and expand a lot of things, but mostly we just had to protect what was there.

DM: Screenwriting requires a different sort of editorial approach than working in prose since, unless you are writing your own film, the work is done in service to another’s vision.  How have you worked this out so far between the two forms?

JR:  Everyone needs an editor, for sure. Preferably a few. I’m really lucky that Kelly and Todd are such brilliant people, and have invited me into their realms. In the world of prose, I’m also incredibly lucky that my girlfriend Emily is an amazing writer and reads everything before it goes anywhere. Sharing writing with people is such an intimate act, right? You really get to the nitty-gritty of other people’s minds. If you can do that with people you love and respect, it is truly awesome.

DM: Finally, to bring something of your prose and your scripting together– can you explain your relationship to the James M. Cain’s Mildred Pierce and how it influenced Rain Dragon before the Mini Series came about?

JR:  Yeah. I first read Mildred Pierce back in about 2003, in preparation for what eventually became this most recent book,Rain Dragon. I had the feeling certain noir writings might help me in some way. I ended up loving Mildred and started pressing it on people, including Todd, who later decided to adapt it, and kindly asked me to help. In the meantime, though, I had already ended up ripping off a few things from the book, and they continue to exist in there. I don’t know how detailed I should get here. But I’ll just say, there is a late scene that involves the discovery of a betrayal that shares certain, shall we say, patterns of James Cain’s construction. I don’t know that anyone would notice except me, but to my perception, that one scene is very much indebted to Cain. And on a larger level, I can see where some of Cain’s sense of velocity might have rubbed off on this book, too. Not that I’d ever be able to approach his “unlaydownable” quality, as they used to say. I wish.
––––––
1. Mildred Pierce by James M. Cain