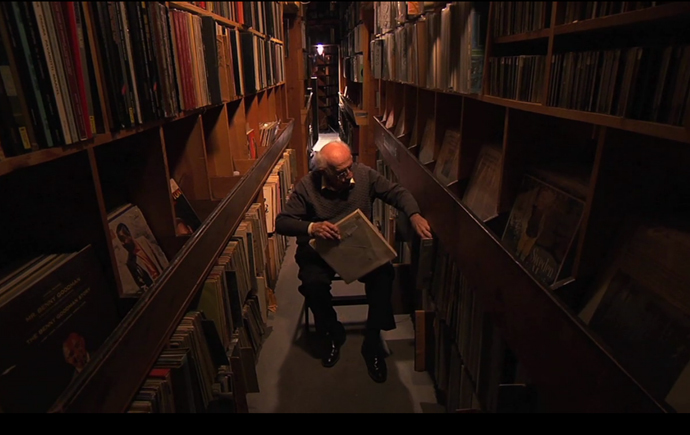 Richard Parks is like a young Orson Welles, brimming with talent and well into his cups… sorry I mean his cups are overflowing, myriads of mastery spilling into various fissures, gullets, open wounds. He can pick a bluegrass mandolin till your heart bleeds in harmony or skips a pulse, but that’s beside the point. Sort of. I’m here to kill a few birds with one stone. It’s Record Store Day this Saturday, April 21 and you should get out and buy some vinyl. Need to hurry up and use all the world’s oil so that we can switch to some sort of saltwater fusion energy and stop killing one another over the greasy stuff records are made from. Regardless, we should all enjoy and recycle the used records still out there piling high till the grooves run out. Murray Gershanz, 88, the subject of Richard Parks’ first short documentary is a sometimes character actor who has run a record store called Music Man Murray in Los Angeles for forever. He has a billion records for sale (a slight stretch), and most he has listened to and catalogued; the stuff he knows may go extinct he’s painstakingly transferred to reel to reel. His son kind of chokes up realizing there’s so much he won’t get a chance to listen to before he dies. And Murray’s cooly trying to find a buyer for the place before he departs this earth. It’s worth 3 to 4 million he figures, but he’ll settle for $500,000. Else the dumpster awaits, and everyone from star DJs to opera students to comic Sarah Silverman will opine the loss of Murray and the possible death of his legacy. Parks’ film is a trippy paced short doc, partly because it’s scored by Parks’ father Van Dyke (nuff said eh?) and gives the impression of coming from a live orchestra pit. The cavernous narrow paths of the store lined to the ceiling with recorded music are beautifully shot, such rich darkness, hard to cull on video, reminiscent of Werner Herzog’s Cave of Forgotten Dreams and some of Parks’ center-justified framing echoes the great Errol Morris. But it’s the attention to character and good storytelling that steals the show. Here’s to the dawn of a great documentarian paying homage to a great collector of culture. Torches passing, check it. It premiers, yes, Record Store Day! on The Documentary Channel, Saturday April 21. Societche! -CM