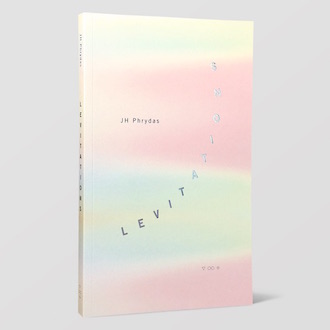 Deliberately locating embodiment within rooms of his own construction, JH Phrydas draws from somatic poetics and a homecoming to the Bay Area’s queer subculture for Levitations, his first full-length collection of poetry. The central question addressed in his collection is

His collection is an attempt to understand this inquiry in three parts, from the speaker’s realization of his benefitting from white supremacy, this “culture of rooms,” to his “entering the mud”: a return to visceral experience.

Levitation’s beginning, “Descente,” introduces the speaker’s struggles to escape his cerebral and removed representation in order to find a more visceral articulation of word/being. We are brought to his mother’s lung, a room that is “not a room” and “not a funeral, though it resembled one”. As with the room/s his speaker details, Phrydas’ line lengths and syntax are in a constant state of flux. If one were to draw them, the blueprints of his room/s would be tesseracts. I had such fun mulling over the melding of body-language-space in moments like this:

Scarred edifices built through language,
these walls,
and those contained.

Phrydas’s speaker is contained within the socio-political markings of queer embodiment and longs to burst through, “With a hatchet, I could fuck this floor up. I could hack a hole through which to pull him, up into her warmth”. The nexus the speaker is caught within is, and is not, personified as his mother: the white walls are his inheritance from the state and white ancestry, and are also of the speaker’s own design. His mother/empire conceit scrambles to the unsettling point where if the speaker were to take a hatchet to U.S. empire’s floorboards, he would also hack away at his subconscious mother. The speaker, without hatchet, yearns to find the space where he and the beloved can be free from socio-political trappings of queer identity and race.

His speaker happens upon such moments of freedom within “Terroir,” the second section of Levitations. This section is comprised of italicized prose poetry and as a result makes for much more fluid reading. Despite its structural fluidity, the depicted city still confines with the same claustrophobia as his mother’s lung–it weaves endlessly as it “construct[s] streets with no exit.” Phrydas keeps his fragmented syntax and tight line construction, but here he uses it to center on the stream of queer and gender-variant realities: where and how we make space to live, what we dream of, and what we speak toward. In his preface, Phrydas writes, “I was saved by the attention of a crowd that didn’t recoil at my entrance. The crowd was a city: refuse from the city, these queers of the night.” He lovingly returns the attention and raises up his queer family with deftly crafted poetry.

His speaker sheds a bar’s neon light onto the tucked away refuges of queer squats and parties, the tired and glitzy and profound. Homecoming in this section is a brief and much needed respite from the jarring mental loops of “Descente”: “When xe arrives, stew set on the sideboard and tortillas in a shallow ceramic bowl. A cuddle later as lights fade behind sheeted glass.” Phrydas shows that queer community is sustained by these kindnesses.

He was my escape,
my entrance into another where we covered each surface
with talismans, images
too bright for the wall and a ceiling hung low.

Away from tight streets in a darkness that touches.

The “rejected body”–a free agent manqué– is hailed in sensuality and acknowledged by its impermanence. When “becoming smaller not an option,” when “we cannot re-write this place,” the only way the speaker can find to escape the entrapment of this century’s “historic crush” is to first find guidance from one’s queer, spiritual, and/or literary elders. The voices of these elders, invoked periodically within the first two sections, culminate as the speaker, frustrated and in despair, struggles against “this shithole empire.”

Claudia Rankine, James Baldwin, M. NourbeSe Philip, and others, all provide their wisdom in a dream sequence that crescendos as dream-Bhanu Kapil suggests that the speaker “enter the mud.” Here we have found the invitation the speaker has searched for: the invitation to enter a language that is “pre-soot yet grimed in / its inevitable always.” When he enters this language he also can inhabit his body/landscape as it is formed and always in the process of re-forming and decaying.

In the process of accepting earthy sensuality, in the process of holding his lover like an “animal as it cries,” Phrydas’s speaker and his beloved are able to momentarily escape. They are not unstained, rather they are in process of loving the whole stained self within the city’s endless sidewalks and ash heaps.

Levitations is mud grit and bar light. This book is the clarity of dawn the morning after and also the complex web of subconscious realization. His syntax and imagery morph and shift to capture the difficult to describe affect of queer embodiment. In the process of lifting his characters into a more harmonious collectivity, he lifted this reader up, too.