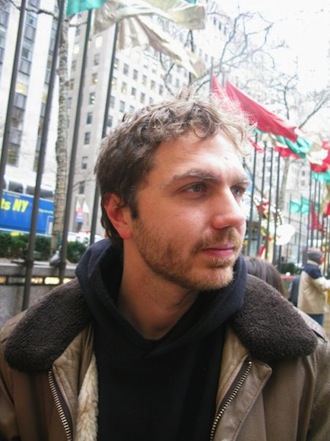 Some of them I put up for free on my blog because I thought they were okay to read for free, but not to pay for. It surprises me when I get an email from somebody and they tell me, “I’ve written a novel, I want to get it published, how do it do it?” I reply back, “How many novels have you written?” And they reply, “This is my first one.” I just sit at the computer disappointed to be alive when I read that.

I wrote Treatise purely as practice. I really enjoyed Chekhov and wanted to understand how he wrote better, so I rewrote all of My Life. When I read I count how many words are in a paragraph and try to figure out how many words statistically a writer likes to use in a paragraph. I try to figure out how they are introducing characters and what they are describing. Reading a story as a writer is very different than reading it in a college class. A writer has to figure out how the author introduces characters, how they line things up, what they decide to describe and what they decide to not describe. How much time they take on dialogue, how they write dialogue. Why the audience enjoys the book. What makes you enjoy it. To write well doesn’t require understanding the deep meaning behind great literary works, that is for sure. To write well requires the same talents as a movie director, understanding pacing and position and blocking. I’ve met really good writers that have completely misread other authors. Because it is very possible to be a good entertaining writer without being very deep. Which has made me skeptical of things like, when a professor says, “What did the author intend?” Because I know now, from knowing authors in person, that they can write really great things and not know what they intend. Because writing is a lot about entertainment and how to entertain.

I think Ezra Pound is the best example of a writer that was not a deep thinker but wrote entertaining and amazing poems. Pound was obsessed with how things looked, with sounds, with making things ‘look different.’ And it is really inspiring, he created a lot of tools for future writers to utilize to make their writing better. But The Cantos is not deep, it is remarkable how it lacks depth. You read The Cantos and are amazed by some of the images Pound creates, but then you try to analyze what he wrote, and realize nothing is there.

I don’t think Hemingway was a very deep thinker either, but he was a person of strong emotions, and had an amazing imagination. I feel like there are three things that are important when talking about writing: the style and look, strong emotions, and depth. I feel like Beckett had style and look and depth but did not have strong emotions. Richard Wright who I love had strong emotions and depth but his style was messy except for Native Son, his other works are really beautiful to me, but I can see why they aren’t accepted on a grand scale because they aren’t pretty. He was just a really passionate guy typing his soul out alone in his room, and he didn’t care if the product was perfect; it was his soul that mattered. But for a writer to be good or whatever that means, he or she has to have one of those three components working for them. Dostoevsky and Dickens had all three, but they are like Gods, if there is an Otherworld or whatever. I wouldn’t be surprised if they were the avatars of the ancient writers of the Bible and the Mahabha.

FZN: What is the greatest pleasure about writing to you?

NC: The thinking about what I’m going to write, the daydreaming, then actually doing it. When I write, I go into a trance. My mind and body becomes one. I feel nothing in those moments. I’m just the writing. Nothing else could ever do that for me. When I play guitar my mind always drifts, when I played sports in school, my mind always drifted away. Sometimes when I teach I feel IN THE MOMENT. But usually I fall out of it and start thinking about being hungry or what I’m going to do tonight.

FZN: What are the biggest benefits the Internet has to offer to writers?

NC: The Internet gives you access to people and to people who might read your work. Before 2000 the only access a writer had to fans were paper literary journals. Getting into a paper literary journal was very hard unless you knew people. You basically had to submit to a giant slush pile and wait for nothing to happen. But now, you can at least access people. You can make friends, which is really good.

Most people in America aren’t into literature or the arts. Where I was from, it was really hard to make friends that cared at all. People would say it was nice, but overall I never got the impression anyone really cared. Sometimes somebody would tell me they read Fight Club or something and want to talk about it. But it didn’t satisfy me. So I went online to find people, which is what I think a lot of people do nowadays. The Internet is really good for sad mentally ill people too, suffering from anxiety issues. A lot of people have anxiety, reading books is very good for anxiety because it fills the mind with other things besides one’s own anxiety-driven thoughts. So lonely people can reach out via the internet, because face to face human connection is too terrifying. That is okay. People like that need a place on the Internet.

FZN: You stress ‘the new’. What new directions do you foresee literature taking?

What we know as literature is a product of the Enlightenment, literature has basically covered everything, war, class, gender, race, etc. What we are waiting for now, is for new cultural groups to write their Nausea or Catcher in The Rye, as in the Korean Nausea, or the Afghan Tale of Two Cities. In America and England, we wait for new little slices of life from places like Chicago, West Virginia or LA. Give us something the media and movies aren’t giving us the audience demands. But the fundamental paradigm of literature has already been decided, until a new epoch of human enlightenment or dark ages arrives, the paradigm is set, we just have to fill in the little gaps. Cormac McCarthy with The Road and DFW with Infinite Jest escape this a little by creating an alternative reality where the same themes can take place, since they don’t have Murakami’s Japan to write about they create one.

FZN: If you could play one song at your funeral, what would it be?

NC: This is a weird question. It makes me think about my own death, which I don’t want to do. The song I’ve listened statistically the most is probably “Silver Springs” by Fleetwood Mac. But I don’t think that is a good funeral song. Do they even play songs at funerals, or is that just in movies? I have only been to a few funerals and I don’t remember a song ever being played.

I like to imagine that I am dead, under ground, back in Vienna, Ohio. And a white tail deer walks through the cemetery, stands on my grave for a minute, and walks on.

FZN: You’re mainly known for your fiction, but you write poetry too. Do you have a favorite poet and if so why do you like that person?

NC:  My favorite poets are the Tang Era poets of China. Here is a good site for them.

Look at this poem:

Here, south of the Yangzi, grows a red orangetree.
(It starts with setting, a large territory, everything south of the Yangzi, then instantly, in a flash it goes to a little tree)
All winter long its leaves are green,
(Then gets even smaller, down to its leaves)
Not because of a warmer soil,
But because its nature is used to the cold.
(Then a metaphor, about something being used to suffering)
Though it might serve your honorable guests,
You leave it here, far below mountain and river.
(That this tree is a guest, you are sitting by a tree, and it is your guest, it creates a world that is not human centered)
Circumstance governs destiny.
Cause and effect are an infinite cycle.
(little piece of philosophy)
You plant your peach-trees and your plums,
You forget the shade from this other tree.
(Time passes and you plant new trees and sit by them, just peaceful truth. It doesn’t have
all that European human shit, nothing experimental, just simple)

FZN:  I heard mention of a new novel coming from you with a ‘giant plot’. What led you to take that route with your present project?

NC:  It is called ‘Go to work and do your job. Care for your children. Pay your bills. Obey the law. Buy products.’ It will be out by Lazy Fascist next year. The route was taken because I had a really weird human experience. And writing in my usual existential rant thing wasn’t going to work. The experience demanded a highly structured plot for my emotions to be released properly, for the expression to truly take form. I believe you have to arrange your novel around the experience, some experiences are really emotional and loose, and work well with romantic emotionalism, but the experience wasn’t so much emotional. It was very structured, ordered, so it required an ordered structured novel.

FZN:  On your I AM ALT LIT episode, you mentioned that some ‘weirdos’ have gotten into the ‘alt lit’ scene, just as they get into every scene, & get involved just to get attention rather than from genuine interest. can you elaborate on that?

NC:  I think the Internet and cable television have given attention fiends an outlet for their emotional problems. My students showed this video Obama Style. I just sat there wondering WHY this video even existed. The guy who made the song, Eric Schartz, produces some lousy shitty show on YouTube, where he makes really cliche and pathetic jokes. Eric Schartz probably called his entire family after the Obama Style song thing and made them listen to it.

FZN: If you could wrap up your worldview in one sentence, what would it be?

NC: During the Typhoon in Korea, the boy everyone calls stupid came up to me and said, “The Typhoon will kill all the cicadas.”

Best Behavior, Treatise, and other titles by Noah Cicero are available through Amazon.