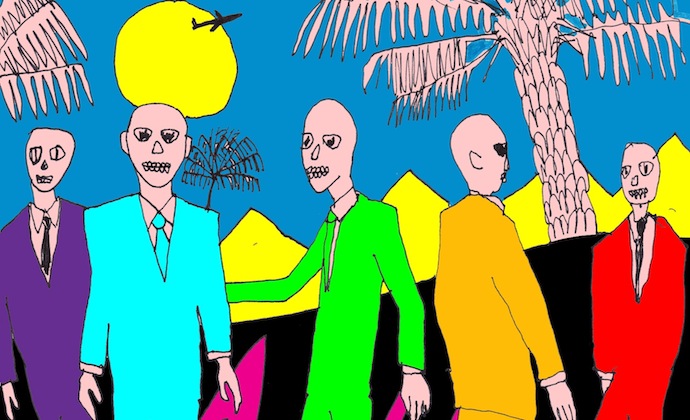 He could see the girl’s dumb, jagged smile now as if it were before him, imprinted there.  The skirt that was barely hanging except by an invisible stitch, the glue prom goers use to keep their tits from showing.  She walked as if pulled around by an unseen trolley.  Her motions in reaching for a glass of water, for a Diet Coke off the table had a palsied, jerking quality as if either she had a serious nervous system problem or else had been coerced into thinking this robotic series of motions was “proper etiquette.”  The rigid smile she had, though, was what was truly the most alarming, arising in response to a tasteless comment he made about her older brother, who had—mysteriously to the coda of Southern California—opted to go into law school on the opposite coast.  You know what they say about lawyers, right?  He had asked.  No, what? She smiled sweetly, the whites of her eyes, not just the pupils, dilating, seeming to take in the entire ethical import of what he was saying.  Well, eh hem, the joke goes: what do you call a bunch of dead lawyers at the bottom of the ocean?  I know it’s a bad joke but it’s just, uh, too much in the public ether not to mention.  Oh, she looked again, the doe-like nature of her skin again seeming to belie absolute trust, even in a phrenological sense, as if the skin had been purified by interior intent.  I don’t know, what?  A GOOD START, he said, at a weird volume he hadn’t quite intended.  It’s a bad one, I know, kind of disgusting.  I mean, why lawyers?  Why not doctors, or, y’know, used car salesmen or something.  Maybe that’s the utility of the joke, I’m not sure.  My uncle was a used car salesman, she said, in a stolid way he wasn’t sure whether to interpret as irony or an irony so ironic it was painfully clear, painfully honest, or rather unaware of all the thousand permutations of shading people normally used to color their intentions and meanings.  Um, that’s nice, I didn’t mean it— Was there a crash?  She said, concerned.  A crash, no, why? –You said something about people in the ocean.  Like the Titanic?  Like the movie Titanic?  Not like the movie Titanic, he said, not that.  More abstract, I mean.  Never mind, it’s a sad thing anyways.  She sat there recalibrating.  He looked at the naked exposé of her shoulder, trickling down into the fine tendon of elastic that held the top of her halter up. On the front of the halter was a cryptic glyph of what looked like a surfboard, with tribal bands of pink and purple wrapped around it.  Light was shining off some sort of celluloid taco stand advertisement behind her so that she seemed to have a natural glow, amplifying what was already no doubt the sheeny gloss of a lifetime career spent exposing oneself to the sun.  Well, what were you studying again?  Fashion design.  Well, Fashion design and merchandising.  It’s sort of the same thing where I go, you just say it in the same sentence.  And you want to be what with that, a fashion designer?  Work in the fashion industry?  Oh, I don’t know.  I’d be fine like managing or something.  Like managing the fashion? I mean, are you working now, managing something?  Actually, I’m organizing an AIDS awareness thing right now.  Like how Ronald Reagan didn’t talk about it.  It’s going to be a series of mannequins in suits with like skulls drawn over their faces.  It’s going to be really spooky.  It actually did sound spooky, he thought.  He imagined walking down a boulevard in downtown Los Angeles, seeing the blank reflection blocking out the faces that had already been painted over, already had dark, engraved eyes.  Somehow the idea that it was about AIDS, though this would no doubt not be entirely forthrightly explained, would make it even more cryptic and foreboding.  That sounds good, he said, AIDS is terrible.  It is terrible, she said.  The idea of AIDS in Southern California, however, was farcical—it would dissolve under the false fixed heat of the landscape.  It was bleached out of skin, it was modified with genes.  It was penciled in with brunches.  The idea that she was talking about this as an imminent threat was odd.  Have you seen pictures?  She said.  When guys’ eyes get all empty, and their skin gets see-through, and they die real young.  They are the first to die from anyone they know, and it’s not like from an accident or anything, they just go away.  It’s terrible.  It actually was terrible, he thought.  All the circulation and round-talking didn’t really do it justice.  This did it justice.  This was the straight place it had to be told from.  That’s totally true.  Everyone tries to talk around it, or talk about the marketing of different cures, or just doesn’t hear about it at all.  But it really is just that, just, terrible.  Yeah I know, she said simply, it is terrible.  From the blond nature of her lips as she told it he knew it was true.