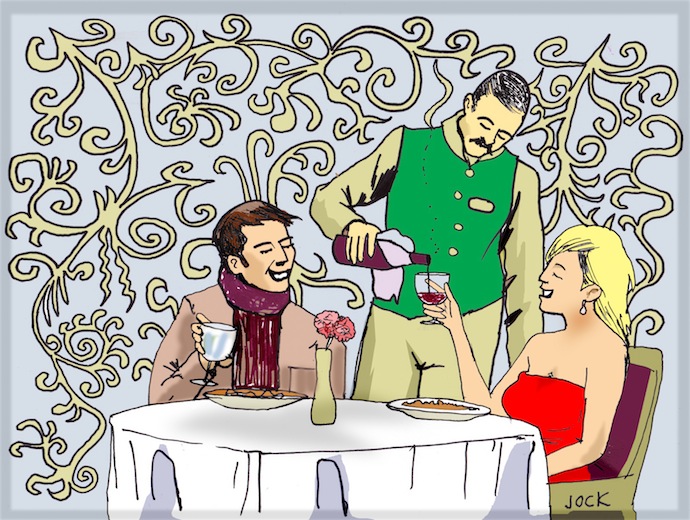 Your cheekbones jut polar-hued in the daemon light
of a smartphone screen into which you text home
your version of Paris as if it’s a fact: synaptic
shimmer of moon on the river, gaslights of the certain
café, the stop-motion theatric of so many perched Rodins,
but in a story about Paris, you shouldn’t bother with these
or with pigeons and the cathedral, with hatchbacks
and hatchbacks and scooters on a Rue, with the hours agog
in the Pompidou supplicant beneath all of that barking art.
In a story about Paris, you shouldn’t mention Paris,
which is an idea baroque and embellished as God.
Of course the street names are hummed ditties,
the crosswalks like keys of a courtly piano, and you order
a Côtes du Rhône as if there’s a metaphysic in it then sing
a merci to the server as if all gratitude is music,
all music gratitude, which it probably is, but
I sill haven’t figured how everyone here wears a scarf
in the kitchen heat of summer, how they all smoke
and nobody runs and if they do we never see anybody panting.
Don’t they have interest payments? Have they no finicky
circuit or jittery transistor? Do their supply lines never corrode,
their bodies never go to Les Centres de Santé to ride gurneys
like black taxis from the Pont Oncologie to the Place
Radiologie where the apparition of the brain meat
is petals on a black bough and all of that but also arteries
and gutters and zones, so the pulp of the mind emerges
a city we also inhabit on holiday from a native state,
a more permanent occupation, the self as a tourist fiction?
I suppose they must, but you wouldn’t know by looking
at them, which is what makes me feel so foreign and gloomy
and in Paris no less! which is so much better than Boise
or flat Tampa, and I’m with you! even your thumbs
are exuberant as the fizz in a Vichy water, the plum sex
of your scarf, your swift cigarette, you look so authentic,
I’d believe it’s the 32nd of July, the 61st minute of a 25th hour,
the pigeons are fat oboes, the cathedral thinks it’s a dove,
my name is Elise, yours is Henri, we’ll loiter here, my liege,
for two thousand, two hundred, and sixty-two years.

Via carriage and steamer and saddle and rail,
via twin-prop and airship and ship of the desert,
via savannah, via steppe, via zip line and glider,
under moat and under rampart, over barb

and under wire, under three green seas, via burro,
via grapple, via ballistic trajectory, like broke satellites
cratered in alien dirt, like banged knuckles on the door
of an uneasy speakeasy, we were the party after

the party nobody wanted, sober and famished,
we were the parched fronds beggared and supplicant
to the clouds, the clouds distant and cool
as a bourgeoisie, and we without our sleet coats,

and we without our hail hats, with less than a shekel,
less than a rupee, less than a kroner or any glinting
Kennedy, three pence short of a peso, we arrived
over guard and under sentry, via catapult, via coyote,

via many genies blinking, we arrived bats in a manse
no bat should inhabit, so we grew fin and we grew talon,
we scrambled arachnid and jaguared in the canopy,
dissembled, reassembled, and it’s true we piss now

in marbled closets and shower indoors as if
we are clergy, it’s true no junta defiles us, no furious
drone or hegemon’s boot, but the faces on the currency
all watch me, the paintings in the museum insist,

and that isn’t my life on earth I arrived in via wormhole,
via subspace, via mother ship descending, in a snap-button
sarong, in a denim sari, in my ten-gallon turban, I look
so authentic you’d almost believe it’s the 44th of July,

I’m the sheriff of this here cow town, I’m one jack better
than a straight flush, buzzards above the valley,
I can see the whites of your eyes, my name is Consuela,
you can call me Mr. President, you can reach for the sky.