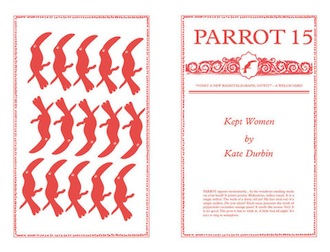 We shuffle inside and gawk, murmuring. This mammoth monarch’s master suite, our guide tells us, contains carved walnut / paneling and dark red Valette rugs on hard wood floors. The floor is / filled with stacks of magazines and papers. There is a California King / size bed with a row of mirrors above it. On the shelf below the mirrors / are a stuffed Mickey Mouse and a Darth Vader figurine as well as many / other toys. On a shelf across the room are over one hundred Hallmark / greeting cards from former girlfriends.

Into whose master bedroom have we intruded?

Hugh Hefner’s master bedroom, of course. And our tour guide is a roving eyeball with a vaguely British accent.

But we’re not actually inside the Playboy Mansion. We’re in a visitor’s guide, or a real estate catalogue. We’re in an archaeological excavation minus the dig. We’re in Lifestyles of the Rich and Famous, or an ethnographic study. We’re in conceptual, or postconceptual poetry.

At its most basic, Kept Women is a series of prose poems that describes the rooms of the Playboy Mansion as seen on the reality show The Girls Next Door. Yet its twelve pages draw on all of the above discourses––tourism, advertising, archaeology, reality TV, anthropology––to reveal, and flaunt, what they share: a voyeuristic sensibility and a fascination with and desire to absorb, or reject, otherness.

With Kept Women, Kate Durbin continues the exploration of popular texts that has formed the throughline of much of her recent work. The chapbook follows her 2011 chapbook E!, which draws its material from The Hills and Dynasty, among other sources; both chapbooks will be collected in her forthcoming book E! Entertainment. Durbin has exploited popular texts in her performance work, too: her Bad Princess Poetry Walk involved a number of women poets dressing up as good Disney princesses gone bad––a kind of avant-pop slutwalk. Her ouevre does not adopt a third-wave feminist perspective so much as Feminism 3.5, or 3.7: it gives serious consideration to what it might mean for women and girls to understand, accept, and collaborate in their own objectification, a question investigated most directly in her Tumblr project Women as Objects.

The Girls Next Door, a 2005-2010 reality show that records the cohabitation of Hefner’s live-in girlfriends Kendra, Bridget, and Holly (later, Kristina and Karissa, the twins), may as well have been chanting her name, and Kept Women is quintessential Durbin: strange, beguiling, and funny in a nervous, beyond-ironic way. In these poems, the mansion’s residents have vacated the premises; what we know of them arrives through their rooms and the objects within them. Perhaps the central concern of the chapbook is to represent these rooms formally, particularly their visual texture. Brand names are used freely, their clunky capitalizations visually disrupting the smooth surface of the writing. In “Pink Playpen” we see: “a large Hello Kitty pillow,” “a plastic baggie of bite size Mounds bars and two bottles of / Tantalizer Body Bronzing Luminizer,” the “Control Clutter / Closet,” a poster of “Honey Rider from James Bond custom made / Beach Bunny bikini.” This overuse of proper nouns is playfully garish, as is the brazen use of alliteration (see also the “mammoth monarch’s master suite” above).

In this and other ways, the poems replicate the juxtaposition of chintz and decadence, bad taste and excess, that characterizes these spaces, and the TV show itself: the crudeness of a Darth Vader figurine amidst such rigorous luxury. Our roving eyeball adopts an equal opportunity reportage style, the master bathroom’s “seven half empty / bottles of Victoria’s Secret Pure Seduction body wash” receiving the same attentiveness as its “glittering marble floors.”

Whereas the show seems to subtly, at times overtly, mock its characters––the camera resting winkingly on Kendra’s dirty laundry as the soundtrack informs us we’re in on a joke––Kept Women resists commentary, relishing in the details but providing the reader with no clear interpretive framework. This is a strategy Durbin has used previously, particularly in “The Hills,” which transcribes in deliriously tedious detail one episode of The Hills. In its thick descriptions of setting and character, “The Hills” provides little if any editorializing, representing its source text almost as an object of anthropological fascination.

The same kind of fetishistic voyeurism is present in Kept Women––but here it gets combined with the breezy tone of the tour guide, and, frequently, the real estate agent. “The estate profits from a waterfall, streams, koi pond, and in-ground pool, all organically linked,” we are told in “Stone Sanctuary.” Hef’s room possesses an “opulent grandeur mixed with a casual, all-American clutter [that] proffers it a best-of-all-worlds ascendancy.” Each poem hangs on this kind of sales pitch; the mixture of anthropological voyeurism with the ooze of the sell makes for an unstable and unsettling poetry, one that destabilizes its source text in turn.

In so doing, the poems take an attitude toward the show that is vexingly, wonderfully ambivalent. Reality TV is at once a project of othering and a project of identification, and Kept Women performs similarly, both defamiliarizing and embracing its subjects––which, of course, are always objects, of a gaze. These poems are fascinated with fascination. If reality TV is the new anthropology, they suggest, it, too, must be an object of study.