Arrival of One Adulthood: A Review of Amy Lawless’s My Dead 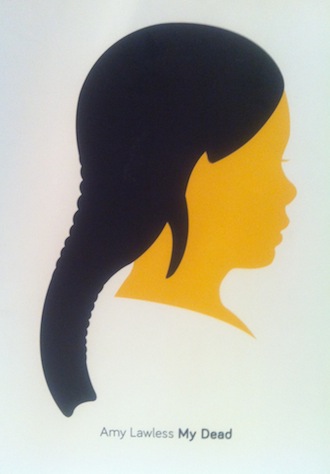 The arrival of Amy Lawless’s second full-length collection of poetry, My Dead, represents the arrival of a certain type of adulthood, perhaps, as she writes in “The Skull Behind My Face,” “The arrival of fear is the arrival of one adulthood.” Throughout this collection, she explores the fear that one encounters when dealing with death, whether it be mourning the loss of loved ones, mourning the loss of a relationship, or considering one’s own mortality. Bookended by long meditations on death and mourning, the book carries throughout it a solemnity as it explores themes of loss, love, loneliness, and anxiety. However, a book so overtly about death also has a lot to say about living.

Divided into four sections, the book opens with a series titled “Elephants in Mourning,” which is arguably the strongest section of the collection. Employing the refrain, “When an elephant dies,” the poems act as a lyric exploration of dealing with loss as seen through the mourning rituals of elephants alongside the mourning rituals of humans:

A number of the sections use broad, general descriptions: “And the DNA cousins and friends and children walked away whether it was raining or not and regretted what they never got to tell him. Like it would matter now if he had known just one more thing as an alive person.” However, there are also some more personal pieces. Along with a poignant section that discusses the death of an uncle, wherein the speaker does not understand why her cousins would place possessions in the coffin with the body (“This bothered me because the living needed these items”), the speaker also addresses her response to September 11th:

Mourning a grandmother is one thing.
Mourning three thousand someone’s child is too much,
But we do it anyway by
Watching some DVD until it’s over
And then letting it sit on the coffee table for a week
Until you can get out of bed and look at it
Not recognizing that this cultural artifact will always be the thing I did
Instead of watch news that day in September.

Mourning is complicated and there is certainly no set of guidelines for humans. In the final section of the book, “The Skull Behind My Face,” the focus on death turns from mourning the loss of others to a more personal struggle with the speaker’s own mortality. Written in direct, straight-forward prose, the section opens: “This week I have been struck by an intense and agonizing fear of death.” What follows could just as easily be considered lyric essay as it can be poetry, especially when considering the definition of essay that means to attempt or try as the speaker attempts to come to grips with this new and sudden fear. The speaker eventually arrives at the realization that the fear of death comes from her desire to live and to live fully. Lawless writes:

Fear of death is why women wear make up, why men wear toupees, why the young
dance, and why we, the fertile, pitch woo and do things with bodies to other bodies that
involve sweat and shame and a degree of mental castration. This is something in all of
us: to preserve something leaving, but dependent on time and space.

Further, the speaker discovers that tasks that she had previously viewed as insignificant are actually meaningful. This sort of basic desire to live and to find meaning in life is evident in other sections in the book too.

Lawless credits Elizabeth Barrett Browning’s Sonnets From the Portuguese for inspiration for the second section of book, “One Way To Write a Sonnet Is To Number the Lines,” and like Sonnets From the Portuguese they take love on as their subject matter, but Lawless’ sonnets also fall into the New York School tradition a la Ted Berrigan and Bernadette Mayer. Not as big-pictured oriented as the two end pieces, this section focuses more closely on the day-to-day, the acceptance that routine is what living is: “Proceed. Walk. Climb. Drive. This is called living,” while also wrestling with the desire for and the failure of love. Tonally this section is different too, allowing more humor and cynicism into the pieces. The second poem in the sequence opens, “Non-assholes deserve love. Assholes and / shitheads also deserve love. You deserve love,” which is a cause for the reader to pause in order to consider which category he or she falls in. In another sonnet, the speaker meets someone called Jesus Christ on the L train and muses, “His crucifixion alone would be a logistical nightmare.”

The longest section of the book, “Shadow Self,” is, unlike the other sections, comprised of individual, non-linked poems. The section deals largely with loneliness as demonstrated by poems like “Body Science,” which lists the various types of fluid secreted from the body and ends with the lines “I don’t know what to call this feeling but I know you are mostly water too / and that you’re gone from me,” and one of the title poems (there are two), where “my dead” refers to past lovers and the speaker cites the importance of being able to feel bad because ultimately that means you’re alive: “It’s important to feel like shit sometimes. / If you don’t, you may be totally wrong and dead and I don’t know what would happen then.” In “Cannibal Wedding,” we learn that cannibals fall in love and experience relationships much in the same way we do. The prose poem ends with a list of those crying at the wedding, and we realize that “cannibalism” is acting more metaphoric as it represents the way humans can (not literally) consume one another:

Those who had loved and lost cried. And those who had never loved but wanted to love
cried. And she, who had looked inside herself and knew that it’s just fucking wrong to
expect another person to fill one’s vessel, cried too because she was the loneliest. She
was the one whose heart needed to be eaten most of all.

The duality of life and death is also demonstrated in this section. In “What Nourishes Me Destroys Me,” Lawless writes, “Yes, we die alone but that’s no reason / to cancel the party.” “Sunt Pueri Pueri, Pueri Puerulia Tractant” (Latin for “children are children, [therefore] children do childish things), offers an ars poetica of sorts: “I listen to the Kinks. Then I come up with words / that mean hunger and loneliness, a deer used for physical purposes.” And the collection is populated by a variety of animals––elephants, deer, wolves, crows, and buffaloes. And the hunger is pervasive through the desire to live more and do more and also through the emptiness expressed in poems like “Pain Minus Love Equals Pain,” where the speaker cannot be sated: “I eat the lush forest with my eyes / and crouch down and bite mossy growth / with my mouth / spitting up my previous dinner.” Another strong poem in this section is “They Still Make Mohammad Ali Pose With Clenched Fists,” whose poignant title captures the sadness of this act. This section also includes more enigmatic poems, such as “Robert Frost,” which includes a man named Robert Frost who eats children, and “Purification Test,” which is a sci-fi poem of criminal confessions.

Despite its dark themes, My Dead is not a melancholic collection. It offers a series of poems in which the author addresses serious subjects in a serious way. The writing throughout is steady, clear, well-crafted, and lyric, and the voice that emerges is one that is still figuring things out but one that is happy to still be figuring things out. My Dead captures the worries and fears of a young woman coming to terms with herself and ultimately acts as a document of the arrival of one adulthood, as well as a document of promise, of other adulthoods, other meditations, to come.

My Dead is available from Octopus Books.