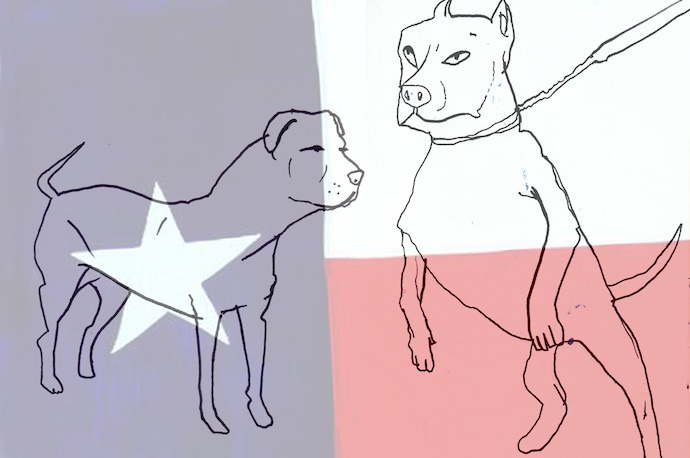 A line of women and children had already formed in front of the makeshift concession stand on the side of the barn before Lynn could announce the barbecue sandwiches were ready. The sun, now in its decline, became less oppressive on the crowd gathered on the southern tip of the Turner property, at the end of a dirt road off Farm to Market Road 524, seventy miles west of Galveston.

With the last piece of pork shoulder chopped and the beer and Coca Cola on ice, a bell announced the stand open for business. Nobody paid mind to the constant barking of dogs, except for the men who remained behind. None of them were interested in barbecue or beer.

Across the yard, George Turner swept dust out of the pit his uncle Slade had constructed from fencing a decade ago, before the assassination in Dallas and Hurricane Betsy, preparing to draw the scratch line through the middle. While known to be a competent carpenter and honest businessman, Slade Turner had spent most of the past twenty years trying to be a good husband, loving father and a respected dogman.

“That fence out there is just like Hammerhead was, it’s got deep game. Never quits.” he said to his nephew whom he had raised as one of his own. That was two years ago, before leukemia began creeping through his wife’s bones and Hammerhead Junior’s loss to the legendary Wino, owned by Brazoria County’s District Attorney Fred Tudor, the progeny of a five-generation dog family and the richest in the county.

As his cousin Maurice was set to inherit the family business, George hoped for a job at the carbon black plant in Sweeny once a position opened. In the meantime he worked in the garage alongside his cousin, a morose man often mistaken for mute, and spent weekends working for his uncle, feeding and training the dogs and taking bets when they hosted conferences every other month, a cut of which went to the house and was split between the two. In the interim, Maude, Slade’s wife, took to poor health and the president had been shot through the back of the head in a convertible.

The weekend’s conference would mark a full year from her passing during the storm. She was still with him in his mind’s eye at every step, even as George took her place in bandaging the dogs’ wounds in the den after matches. During these quiet, sad moments he knew they had done right in raising him as their own, watching the young man speak softly to the injured pup as he sewed stitches much like his wife used to.

Slade had been absent during her death, waiting for the storm to pass while he holed up in a motel on the way back from a visit with Floyd Beaudroux in Louisiana, unaware that his wife had taken a turn for the worse in bed. Though honored to have met a man he admittedly looked up to in the bloodsport, he regretted the trip. His wife’s insistence on going beforehand failed to alleviate his guilt.

He still trained Colby dogs, all bred from the same lineage of Hammerhead, but in the time that followed he began to lose more matches than win to fast-lane dogs with hard mouths, dogs who fought high in the shoulder, instead of for stamina. Luckily none of his contenders ever failed to scratch at their opponents and none were considered curs.

Maurice and his sweetheart Lynn both operated the family service station Slade opened upon returning from the Second Great War and marrying Maude soon after. Lynn made and served barbecue in the store on weekdays while Maurice ran the business from sunrise to 9pm, six days a week. On Saturdays, Lynn joined George as he walked Lobo, the latest offspring in the lineage of Hammerhead that was said to have deep game. The dog had been sold to another breeder only to be repurchased at twice the original cost months before in a desperate bid to match Wino. Most of the other dogs had also been sold. Several litters killed each other.

The number of kennels in the yard dipped as Slade began selling them. Even in the decline, with his wife gone, he now spoke of hardly anything else.

“Now Lobo over there’s an Ace ear dog. Don’t bring him back til after sundown. You hand-walk that dog from now til the moon’s rising and he’ll have no problem standing on his feet during a long contest. Not only will that dog be game, but dang if you’ll have plenty of money after the next match to go to Surfside Beach and drive all the women crazy,” said Slade on the previous Saturday.

George had no problem with this. He already drove Lynn crazy every Saturday. Hours after his uncle’s words, the two lay intertwined in each other in the tall grass behind the Bethlehem Church off State Highway 3.

“I wish you were the only one, George. I want you to be,” she whispered.

“I know. Don’t say anything honey, I don’t want to lose it,” came his reply. Once a week they uttered these words, solidifying the pact between themselves, the earth and Lobo.

That night as the men sat down to their usual supper, Slade talked up the conference before flying off about Lobo. George interrupted.

“Lobo’s been acting funny lately. I saw a coupla spots in his left eye and the other day he walked right into the corner of the barn. You think maybe he’s going blind?”

“Aww, Lobo’s eyes always been a little weak. I tell you, this dog is Ace, he’s the only one out there that can take Wino. Fred’s got breeding, but he’s got something to learn- he didn’t fight the Germans like I did and sorry to say he never had a wife like Maude.”

A week later, George now stood at a safe distance from Lynn, watching Fred show off Wino to the other breeders through slanted eyes.

The first three matches of the evening were quick. Speckles of fresh blood covered the pit as George counted cash and wrote figures in his notepad. Lynn brought him over a beer.

He grunted, trying hard not to make eye contact. Fred, across the way, showed no such worry, laughing at his own jokes. Slade, face running with sweat, brought Lobo out to pit. As it was his property, he was to referee, as George gathered bets, 20-1 odds against Lobo.

At Slade’s call, the dogs were pitted, Wino charging at Lobo, biting high up as the crowd cried out in almost perfect unison. George roared,

Fred yelled out, “That’s it Wino! Faster than a quarter horse taken after a stray!”

To his surprise though, Lobo was up for the challenge, sinking his teeth into Wino, and then breaking his jaw, on his feet for the entirety. He would miss his mark, only to try again until fangs met skin.

As the spectators watched Lobo and his failing eyes in awe, Fred jumped and yelled in glee as Lobo took his turn scratching at his opponent. The dog was halfway when he unexpectedly turned to look at George and walked into the pit wall.

Slade looked around him and took a deep breath.

“Call the fight, Pop. He can’t see,” said George, putting his hand on his shoulder.

Slade had no choice but to do so. The dog had never quit.

“I hate to do this but I have to declare Wino the winner,” he said, shaking Fred’s hand. He excused himself and walked off to the house, sitting on the steps of the back porch, face in his palms. George spoke to Fred for a moment and then announced a fifteen minute break before sprinting to the house.

When Slade lifted his head, tears ran down his face.

“Go on now. You shouldn’t see me like this,” he said in embarrassment.

“Come on, Pa. That’s no way to get along,” said George, putting his arm around his shoulder.

“He fought a good fight. Fred says he’s willing to call a draw.”

“I know he fought a good fight and I’m proud. Tell Fred I don’t want a draw, I bet the remaining pups and equipment and he can have it, I’m done here.”

The two men stared at the Union Pacific Railroad cars moving past in the distance, now shadows in the dying light.

“Yeah I aint crying over Lobo, I wanna keep him. I don’t know what happened, I aint cried since I broke my ankle as a kid.”

George understood and patted him on the back again, hard. He stood up and saw Lynn waving to return.

“When you’re ready, come and get him, I’ll stitch him up. Lynn’ll take the bets.”

The next match would soon begin.