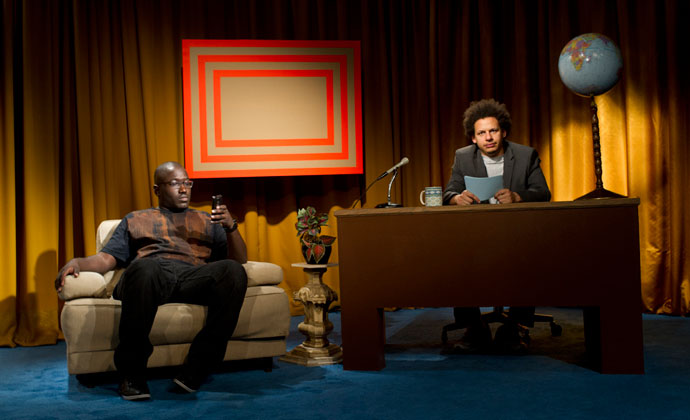 I May Or May Not Have Interviewed Eric Andre

It’s Friday the 13th. Mercury is retrograde. Eric Andre calls me up and asks what I’m doing. I tell him not much, sitting on the couch eating dip. This leads to the mistaken impression that I’m sitting on a couch somewhere in East Atlanta eating shit. Oh WOW, he says. In two seconds I’ve gone from mild-mannered shitty interviewer to interviewer with a shit-eating fetish. It’s a fetish site, I joke. Don’t you wish you’d called a phone sex operator instead?

Freestyling. Singing in my ear. So when’s his music career getting underway? He’s a step ahead of me (keep up, son) he’s starting an MP3 label. He asks who my favorite bands are, who I listen to. Silver Jews is my all-time favorite… he politely pretends to know who they are. Or perhaps I’m not giving him credit. Perhaps the ones that escape Florida deserve all the credit, as we believe, those of us who’ve escaped. Like that Against Me! song. This is not a story about Against Me!

I had some questions, I promise. I wrote them down. I was mildly proud of myself, having never interviewed anyone since maybe my high school era doing an oral history of my grandma, and that was awkward, too.

But as soon as I started talking to Mr. Andre, it all just seemed so dumb. So trivial. He doesn’t care what I’m asking him: he can just riff off whatever I say, I can hear him repeating back the things I’m saying over the blurry connection, finding the sound or word that will connect to an answer. I would like the same facility with language, but I hate the phone. If I ever call a private individual, it’s a true sign of love or desperation (usually my parents). If you’re a company or public entity, it’s financial desperation. I don’t even like most people. I like Eric Andre, in the way that I imagine being liked as a person, but this isn’t about being a person, it’s about being an item on a list he has to check off because his PR guy sent along my name and number and suggested that publicity is good. Exposure. Taking down your pants in the park not because you’re a pervert but because it’s Bay to Breakers and you’ve been drinking all morning across the City and really have to pee. Denizens of the Upper Haight, avert your eyes.

He’s doing five other things at the same time (eating sushi, messing with Paypal, preparing for a real interview), which is good, because he’s distracted, which means I can wander around the house and pet the dog who’s just got whiny because it’s raining. So here are the facts (which I present to you as best I can recall, unverifiable, and without remorse): His favorite Real Housewives show is Atlanta (you’ve got to represent, right?), but New Jersey is good, too. His favorite Adult Swim shows are Space Ghost and Steve Brule (of Tim and Eric Awesome Show and Check it Out!). I ask if Hannibal Buress is his Zorak. I don’t go so far as to ask if Buress is his Margaret Dumont. He doesn’t like labels, and prefers that I do not pigeon-hole him, which is fine, because actor or comedian? is beside the point, anyway. He does interviews on the toilet all the time because, hell, he’s a busy guy. His first foray into the world of film was as a child, using the family camcorder to record objects around the house as a guerilla-style documentary filmmaker: the fridge this is a fridge a chair this is a chair. Very meta, I tell him. Very meta, he repeats.

Eventually it devolves (eventually being a relative term, since Google Voice, which failed to record the interview, notifies me that it was a 13-minute call, and it was never a good conversation to begin with) into Andre making up and humming a song into the phone while I laugh and try to think of anything 1. I care to ask, that 2. doesn’t make me look like a complete idiot, that 3. might prove interesting, in the long run. It has already been established that one or both of us might be high (we’re both from Florida, so bath-salt speculate away). I couldn’t hear what his favorite food to eat while high was, and made the (wild) assumption that I’d be able to glean it from the (imaginary) recording.

I put both of us out of our misery and hang up.

He sounded kind of surprised when I said I was coming to his show at the EARL on Tuesday, which was gratifying because gentlemen tend to assume that it’s a done deal: they’re having a show, I’ll be there––no special invitation needed. And his tone changed from off-the-cuff bullshittery to a sincere thank you for the interview, which was also gratifying––sort of in the way soldiers in the movies say “Thank you, Sir, can I have another!” I don’t know what to expect from Tuesday’s show at the EARL, except for musical guest Killer Mike, awkward pauses, and terrible interviews. I’ll be easy to spot: the (second?) awkwardest person in the room.