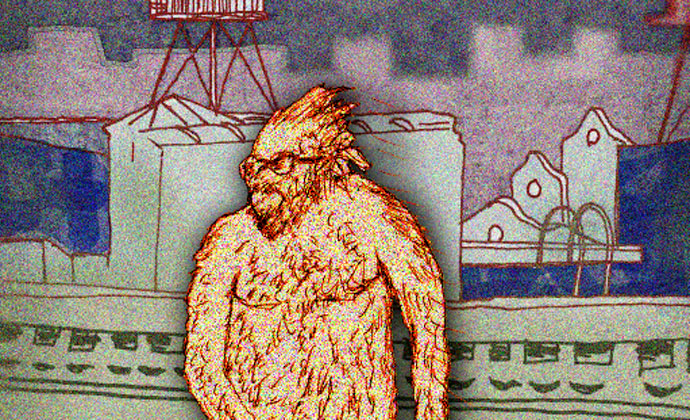 In the end, it wasn’t being mistaken for a Sasquatch that got me to quit drinking. Most people get that part wrong. Admittedly, if I’d known everything would go to shit that soon afterwards, I never would have taken off my shirt. But moshing on the rooftop had seemed like a genius idea, and it was a July in New York; I’m not particularly small, and anything I can do to minimize my own sweat is the best possible idea at that moment. And so I took off, a one-man circle pit, tracing my own circumference and never fearing dizziness or a stumble that might drop me to the sidewalk five stories below.

Of course no one joined in. Of course one of my friends took a photo. Of course one of them posted it online: my blurred form at just before eleven at night, arms askew, face indistinct, body in motion against a dark blue sky. I’d never thought of myself as particularly hairy. That notion was to be shattered. Two days later, I saw that a familiar outline had gone viral. Brooklyn Sasquatch? the caption read. At least they’d put in a question mark.

Maybe it’s worthwhile to provide some context. The rooftop was in a section of Brooklyn that overlooked a low industrial landscape like something from a Michael Mann film, all pipelines, thin metal structures, and loneliness. (The vaporous synth soundtrack practically wrote itself.) The occasion was a barbecue: friends lived in an apartment in the building, and had loaded grills upstairs along with coolers full of beer, bottles of bottom-shelf bourbon, and squat plastic dispensers ready to issue forth mustard. I’d been up there since five. I’d brought sausage; I opted to not to eat any at first, worried I might gorge myself, might trigger illness or inspire disgust. And thus: first beer, then green-label Evan Williams traveled into a stomach that hadn’t seen food since that morning’s bagel. By ten o’clock a friend had taken control of the rooftop’s music and had cued up early-eighties hardcore: Dag Nasty and Bad Brains and Government Issue. The spirit moved me. I draped my shirt over one cooler and clapped my hands together and began a half-skip traversal of the rooftop, arms pumping in their own unkempt rhythm.

I kept it up for six minutes, then felt winded. I found my shirt and let it settle on my chest; I looked at its grey color and watched patches of darker grey emerge. I opened up the cooler and took out a beer and spent three minutes trying to twist off the cap before realizing I needed a proper opener. I whanged it against the metal-rimmed edge of a folding table and managed only to scatter some snacks. I trudged back to the rest of the group, my breaths deep, boozy sweat beginning to sting my eyes. I found a neglected hot dog, charred covering bubbled and blackened and letting heat vanish into the air around it, and awkwardly snapped it into a hamburger bun. Thus: dinner.

Two hours later I was home and asleep, and seven hours after that I was waking up hung over and dry-mouthed. Such was the shape of the weekend.

So apparently Sasquatchism was to be my new credo. A friend named Brian Powell was the one who emailed with the news. “Hey,” his email read, “you’re about four months from being hunted on reality television.” Below that, a link; on that link, the photo of me in motion, sent anonymously. My features blurred; eyes and a mouth visible, but only prototypically human. Blurred arms suggesting frenzied movement; a chest covered in hair. Might as well have been fur, I thought. It looked like that archetypal still-frame of a bigfoot — or a guy in a fur suit — caught mid-lurch in some fraying Kodacolor forest, head caught eternally in mid-turn. There was that sort of digital ether present, that organ through which my mode might be elevated to the mythical.

Alternately: Bigfoot on an urban rooftop, the lights of industry behind him. The sort of image I’d have wanted to believe in had I not been its subject.

Of course it was disseminated. Of course it became ubiquitous: urbansasquatch dot tumblr dot com. “Is that fetish slang or something?” one friend asked me. “Like a hairy dude you call in when normal bears won’t suffice?”

I told him no. I told him it wasn’t slang for anything, as far as I knew.

As far as I could tell, half the Sasquatch crew were in on the joke––let’s mock the drunk asshole a little bit––and half were right-and-proper True Believers.  Over time, the proportion shifted in favor of the latter. Two months later, the weather cooler, I sat in my apartment and ran a search on “Brooklyn Sasquatch” and found multiple fansites dedicated to the concept. Some compared the blurred photo of me to other reported images of Sasquatches, skunk apes, and other such missing-link cryptids. Image editors’ default arrows purported to identify points of comparison, similar anatomy; amateur attempts at defining a species.

“This is the first sighting of such a creature west of Pennsylvania in nearly three decades,” another site read. “I can only conclude that some unknown factors have led to its migration, and that it seeks a mate, or some isolated home in the urban wilderness.”

The urge to email them a correction was strong. “Not to fuck anything up for you,” I wanted to write, “but that’s not a Sasquatch. That’s a hairy guy on a rooftop who had a bit too much to drink.” But I kept putting off sending in that correction. The timing never seemed right; the progression of theories had its own compelling charm.

After a while this got to be my nightly routine: I’d open a beer or a bottle of bourbon and plant myself in front of the computer to see if anything had changed. Sometimes there would be new posts on the informational sites; sometimes I’d find a new collage with my shape at its center, the yeti-me menacing Neal Armstrong on the moon, looming over an atomic test site, or lurking in the background of a scene from an obscure early-80s science fiction film.

I assumed this would die down after a while. It did not.

It was strange, watching this emergence of a counterfeit self. Sometimes, after enough hours I could stare at that photo of myself and almost imagine that it wasn’t me. I would find myself staring at it on a website that broke down the data associated with the image––the camera model, the time of night, the f-stop, and anything else that the camera might have supplied––and I’d find myself lulled in. I’d stare at the text below the image and at the analysis below the text and at the commentary below the analysis, and at links and tags and more links and portals to social networks and further pages of discussion; I’d occasionally find myself bound up in threads dedicated to chronicling one community member’s quixotic quest for new living arrangements; I’d end up in some part of the discussion that bore no resemblance to anything having to do with the first post, the analysis or interpretation that had launched this calvacade. And so I’d return to the beginning and look back up at the photo and, for a split-second one Tuesday night, my head throbbing, I thought, “Kings County Sasquatch” instead of “me.”

It was only for an instant––not a lack of recognition as much as something akin to the experience of being re-introduced to a middle-school friend a decade after college. That point where you need to make a leap, when your image of the person right in front of you needs a jumpstart to be rightly and properly realized. But still: that moment of not-me got to me. I got drunker and clicked around some more and avoided any other Sasquatch images for the rest of the night, treating them the same way I might avoid crime scene photos, images of rotting corpses, or sketches of wartime atrocities.

The next morning I woke up with a shitty headache and felt blurred as I went to work––the same sort of gaseous boundary to my skull that you could almost see in the image of me on the rooftop. The office that day felt numb. Of course I looked at Sasquatch sites in my downtime all day, fearing and yet craving that that gap in recognition would come again.

Two nights later, halfway into my second beer, it did. The dread collected and felt like that moment when you’re not sure if your loss of balance will result in a fall. It was an electric sort of shiver that ran through me, something between nausea and ecstasy, and inextricable from either.

And so I found myself on another one of the sites, a home to true believers; I made a profile for myself, choosing a handle based around an old nickname I’d had in high school. I created a post, with “New information” as the title. “I believe there’s been another sighting, also in Kings County,” I began. My hands hovered above the keys, waiting to see what words might be summoned next.