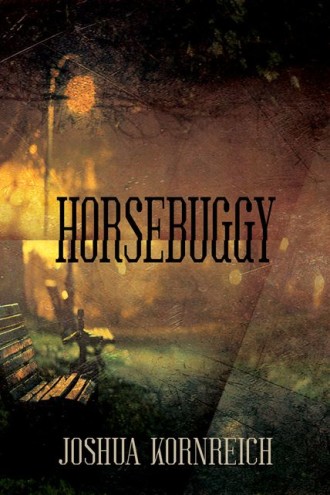 Kornreich’s latest novel is all talk. Big talk. Small talk. Fast talk. Trash talk. Ten pages in and you might not be sure about who’s talking, but you’ll listen. You’ll listen like your life depended on it. Because you’ll want to know. You’ll want to know what’s going to happen to those horses. Now that it’s unlawful to operate horse-drawn vehicles in town, you might be wonderin’ what’s going to happen to those horses. The Great White Giant thinks those horses should be spoken of. Meanwhile, the Great White Giant has done terrible things that go unspoken. Ten pages in and you won’t know if you’re in 2019 or 1919. The mayor’s decree at the beginning of the novel (“By executive order, it shall be, after ninety days, unlawful to operate a horse-drawn vehicle or offer transportation to the public on a vehicle drawn or pulled by horse”) creates an atmosphere not unlike Orson Welles’ The Magnificent Ambersons. In Welles’ 1942 film about the rise of the automobile, businessmen fantasize about a labyrinthine future of roads and endless highways. Horseless roads and horseless highways. The film features a memorable scene of a couple who pass by a broken down automobile. “Get a horse,” they laugh. Without stopping to help, the couple pass on by the stranded automobile owners and, moments later, their carriage topples over a snowy ridge. The inherent violence of progress and the supposedly noble drive for innovation is also severely echoed in the film’s conclusion. This is just one of many distressingly important points that I think a novel like Horsebuggy shares with Welles’ film. Business is what turns adults into evil men. Business is what leaves children powerless in the middle of the night.

Whether it’s 2019 or 1919, Kornreich’s writing means business, because business has always been business as usual. Business might as well be a subgenre of horror. Like Knotty, Knotty, Knotty (2014) and The Boy Who Killed Caterpillars (2007), the circuitous language and disturbing characters of Joshua Kornreich’s third novel harbors the stuff of nightmares:

But if what you’re askin me is whether or not there was anything suspicious about him, the answer is no. No, not at all. Sure, he was real quiet and such, but last I checked, being quiet was not considered a criminal offense. Horse-drawn carriages, those are against the law now, but no being into talking—there’s no law against that one just yet. Of course, if not being into talking was ever considered unlawful, that would fit me fine, cuz unlike him, I can go on talking all day. Just ask anyone who knows me and they’ll tell ya I’m a talker’s talker if there ever was one.

Kornreich’s sentence structure is carefully crafted and distinctly repetitive. His novels might be better described as deformed and deforming language economies. Corrupted economies that mirror the same ones experienced by his corrupt and/or corruptible narrators. In Horsebuggy, a repeating word or phrase is always being reproduced, revised, or deliberately rearranged to usher in new narratives. These economies sometimes also feel like language traps. In the selection above, Kornreich’s interpellative narrator makes it clear that he doesn’t understand what you are “askin.” By the end of the paragraph, he follows u by demanding that you “ask anyone who knows me,” suggesting that the reader will eventually experience additional narrators that will be able to confirm or deny what’s being communicated by this “talker’s talker.” However, this is just one example of how Kornreich uses repetition. Note the “no” at the end of the first sentence and its immediate occurrence in the next. Then comes the sentence-to-sentence transferal of the word “quiet.” Then Kornreich recycles the word “law.” Then the word “talk.” By gradually connecting characters’ pasts to their present, the author uses repetition to advance certain narratives and it always feels pointed and never frivolous. While noticeably different, this careful layering feels reminiscent of his mind-shattering debut, The Boy Who Killed Caterpillars:

The fundamental drive of this book is the crooked-nosed man’s desire for Grace, a woman who is repeatedly juxtaposed with a mare named Gracie. A Sadeian space at times, the characters of Horsebuggy are sometimes particularized personifications of flaws, sometimes representations of filthy barnyard animals. Grace (or was it Gracie?) kicks the crooked-nosed man the same way a boy named Junior was once kicked in the chest by shotgun recoil. Early on, readers are introduced to a boy named Junior who, as his stern father points out, shares a name with a pig. A pig named Junior. In one of many unnerving sequences in Horsebuggy, Junior’s father is insistent on teaching him how to shoot a gun. Here, Kornreich brilliantly captures the violence of teaching violence:

Good. Now let’s aim at her together. Let’s you and me point it at her, like so. Good. How’s that feel, son? Does it feel good? It should feel good to ya now. Now that we’re here holdin it together the way we’re holdin in, it should feel good. Does it feel good? Good. Now lean your head this way. Don’t fight me, son. Just lean your head down this way. Down this way. This way, I said. No, not that way. This way. Your head should here, ya see?

Later, we are introduced to a brown boy at war with a giant. Like Junior, the brown boy is told to follow orders. But are they orders or are they executive orders?

He’s not my boy. He’s your boy. He’s brown like you, like his daddy. Not like me. He’s your son, not mine. But he’s still gotta follow my rules if he wants to live in my home.

The adult characters of Horsebuggy often come across as smeared or half-erased persons. Smeared with the shit of childhood, the trauma of following orders. Of being disorded by masculine violence, racism, sexual violence, and the bloodstained fingers of bankers. Yet these poor souls are determined to survive in endlessly ending times. As if gnawing through the walls of a barn, these buggy, horse-drawn bodies want to twist around and chew through whatever they can for nourishment. It’s always about survival for Kornreich. It’s not all talk. It’s a mouthful. It’s business as usual.