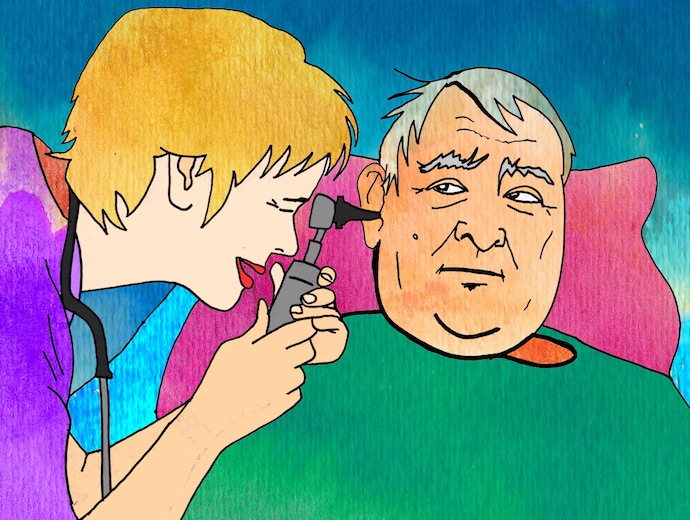 Sarah was a nurse now and she liked it. The first day she came back from work at the hospital and she was excited.

“What are you so excited about?” I asked.

She said, “You have to go in there and pull out the feces with your finger.”

I shook my head and she smiled with joy.

Then she said, “Seriously, you haven’t truly felt happiness until you’ve digitally dis-impacted another human being.”

Then she asked if she could practice on me. She told me to take a ton of Pepto Bismol and let her work her magic.

I shook my head no. I didn’t want her finger in my ass. Then she giggled like a maniac and wiggled her finger around like she was digitally dis-impacting me. It made me shiver.

And Sarah loved her other nurses and how crazy they were.

She loved how Toni flipped out about one of her filthy patients and kept screaming, “Didn’t your mother teach you how to clean your foreskin? Didn’t she teach you how to keep your fucking foreskin clean? Goddamnit, I bet you had a bad mother.”

And she loved the nurse’s jokes.  She loved how one evening a man came into the emergency room caked in blood. He was riding a riding lawnmower when it flipped over on him and took off one of his testicles. It had to be the strangest castration on record. That day Sarah was giving report about this patient to the serious nurse. The serious nurse never broke a smile.  Sarah was telling her what happened to the man with the lawnmower and how he lost one of his testicles in the accident. The serious nurse looked at Sarah and said, “What was he doing?  Manscaping?”

But these were the early days of working at the hospital and she was excited by everything, even the sexual harassment. Dr. Pervert always harassed the nurses and then pretended nothing happened. He had ten grievances filed against him in one year alone.

It got so bad that Sarah started getting jealous one day and thinking, “What’s wrong with me?”

One of the nurses told Sarah she couldn’t believe he never tried to harass her.

The nurses laughed. But there was more.

There was the old woman who was getting ready to die. She had been on a respirator for the past four months and now they were taking her off. The family came to say goodbye. They held her hand. Sarah walked in and bent down to take her readings.

The old woman opened her eyes and said in a whisper, “ET BT TT IC.”

The family put their faces down to their mother’s face so they could hear. She pointed to Sarah and said it again, “AN ET B T Teetee I C.”

Sarah was shocked. The family was shocked. It was probably just nonsense but it sounded like she was saying “An itty bitty titty I see.” The woman’s daughter scolded her mother. “Mother.” Then the daughter apologized to Sarah, but the sick old woman kept going, “AN ITTY BT TT I SEE.”

It was like the old woman was a girl again and she was mocking a sister.

Three hours later the old woman passed away in her sleep without saying anything else.

That evening Sarah said, “Man, my boobs must be really small for a dying woman to use her last words to point out the smallness of my chest.” An itty bitty titty I see.

And Sarah loved the patients like the Schizophrenic. The Schizophrenic wasn’t some skinny kid who heard voices or cut his arms or some old woman who was talking to the lord. This guy was big as hell and had these massive arms. There were tattoos on his neck and tattoos on his eyelids and there were tattoos on the top of his shaved head. There was a note on the door that the nurses in psych made for him, “Please be careful around me. I suffer from delusional thoughts and hear voices that tell me to hurt friendly people like you. Please don’t help me hurt you.”

Then Sarah heard about how he’d broken a nurse’s nose the week before. He thought she was the devil. Why is everyone the devil?

So Sarah sat down and washed his feet and started communicating with him. She noticed he had a devil’s face on his forearm.

She said, “O that’s so pretty. You have so many of them on your arms too.”

And then the schizophrenic guy looked at her like “Ah fuck. Here I am in the middle of a complete psychotic break and I have shitten ass sally sunshine trying to make conversation with me.”

She kept looking at his tattoos and there was one with a star and a date inside the star.

“Is that your birthday?” Sarah asked.

The schizophrenic guy didn’t answer. Sarah thought about his birthday and tried remembering what his sign was.

Then the guy finally had enough. He said, “I’m a fucking schizophrenic.”

Sarah didn’t hear him but kept on going. “What? Are you a Gemini. No.” “Are you a Cancer? Maybe.” The guy shouted again.  “I’m a schizophrenic. I’m a fucking schizophrenic.”

They didn’t know what the hell the other was talking about. We never do.

But Sarah had other things to worry about now. There were miracles and nightmares. There was the miracle of the old man who was deaf and hadn’t heard in years. He just sat around reading old musty history books full of war. Sarah cleaned out his ears one night and discovered he wasn’t deaf. “Gracious it looks like your ears are really dirty,” Sarah said and took out her tweezers. She pulled out the clot of wax and looked at it. It was the size of a baby finger. “I bet that feels better,” Sarah said. All of a sudden the old man shouted. “I can hear. I can hear. It’s a miracle.” But it wasn’t a miracle. There were only nightmares now.

They drugged him up the next morning. But then Sarah started seeing things too. She saw murder and death and righteousness and rot and feces and a hand exploding. She decided to see the old bitch as well. Sarah looked at where the devil woman always sat and said: “Can you believe you just said that?”  The schizophrenic guy looked at her like someone finally understood. He said, “Yeah she’s always running her mouth like that. You can’t get her to stop.”

Sarah had another idea. She walked over to where the hallucination was standing or at least where the schizophrenic guy was looking. Sarah took her finger and pointed at the devil woman and shouted, “You know what? I really think you need to shut your big ass mouth.”

The schizophrenic guy looked like someone was finally making sense. Someone was finally listening. And so Sarah acted like the devil woman was trying to start some shit and she said, “What did she say?” The schizophrenic guy said, “I hate to tell you this, nurse, but she called you a cunt a few minutes ago.”  Sarah said, “She called me a what?”   So Sarah started wrestling with the air. She punched a punch and she kicked a kick. She started putting the air into a headlock before she finally kicked another kick until the devil woman ran out of the door––zoom. Sarah shouted after it, “I don’t ever want to see your tramp ass again or I’m gonna rip out out those fake ass hair extensions.” Then Sarah smacked her hands together and said shoo wee.  The schizophrenic guy said, “Thank god she’s gone. Finally.”

So that night I dreamed about Sarah. I imagined she was a giant tower of stone and flesh and blood and that all of history was falling from her hair. The devil woman was there with a black eye and Napoleon, Nefertiti, Josephine, Alexander and Bocephulus, Tristan and Isolde, the Sufi poet Attar and his conference of birds. There was Travis at the Alamo, Jesse and Frank James. There were castrations and impacted bowels. There were wars and famines and bombs exploding and there was Herodotus and there was the battle of Cannae and Chancellorsville. There were the bodies of soldiers piling up all around her and there were fevers inside of these bodies. So in my dream I saw Sarah stomping them all and becoming her own history. I saw her becoming the ENTIRE world, and we were all bowing our heads in prayer.

“HELL YEAH” is an excerpt from The Sarah Book (forthcoming).