Bringing Back the I: Ana Božičević’s Rise in the Fall 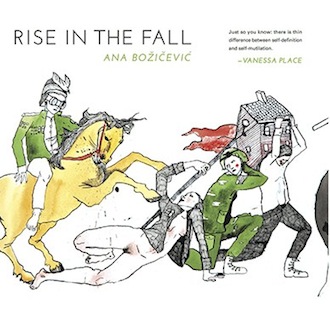 More important, with her standard there can be no serious speculative challenges to an “adult, tragic sensibility” and no inquiry into epistemological and social principles. Ultimately her poets become confined within dramas of coming to terms with a necessary domesticity. (Altieri, Charles. Self and Sensibility in Contemporary American Poetry. Cambridge: Cambridge UP, 1984.)

Altieri held up models for the lyric that were socially engaged, and to get right to the subject of this review, Rise in the Fall is one such a book.

There’s been talk in poetry, since Sharon Olds’s injunction and perhaps in avant-garde circles for other reasons, of “taking the ‘I’ out”––make it veiled, don’t tell yourself, don’t show yourself in verse or any other way, shape, or form. But in Rise in the Fall, we have the return of the lyric I, poised in an acutely socially conscious way of reading the world, all the while peppered with Ana Božičević’s sense of wit and ability to (like all good chiasmus does) strike on the middle, to make us laugh, but with a dark undertone of serious throughout the book. These are not tragic poems, which is probably all the better. There’s a tragicomedy to the pages of this book that helps us to find within it a way of making sense of the social, the critical, and the daily while carrying our hearts with us, perhaps heavily––but not too much so.

Božičević’s book begins with a quotation from the conceptual poet Vanessa Place: “Just so you know: there is thin difference between self-definition and self-mutilation.” These poems enact that difference; the “I” appears, but does not obscure the social world or the addressees of many of Božičević’s poems. She begins with a poem that enacts the social along the color line:

Softly, Nietzsche landed on earth. He found
it green. He was alone, save for the horse––
it stood off to the side of a fallen wood
fence.

Then, in the next stanza, Božičević contradicts her previous narrative/allegorical stance by saying, with all the lyric verve she can muster:

This is the whitest shit
I’ve ever written. Truth is, Osama bin Laden
was killed today, two women were shot
in that raid, and yet again
I can’t escape this feeling of living in a world of men

The book’s first section continues in this vein, marrying the best of the sensibly almost-tragic lyric tradition with a social pull that lets us in on the world, too: not unlike Alice Notley or Ted Berrigan’s NY-school work. She even includes a poem for Occupy Wall Street, aptly titled, “When the Dead Sing Out”:

She wants pearls and she wants the revolution—
how can she have both? Let’s throw on
our McQueen hooves & rush to the barricade
in a pearlspray of bubble and light—what
charges us there? Nothing.

Božičević’s social conscience is always entwined with a knowledge of theoretical concepts that keep her at bay, just a bit. She’s able to write personably and wisely about revolution without necessarily believing in it 100%––her theory-brain just won’t let her off the hook, and it’s a good thing for us as readers.

Personal poems pepper the book, but always through the lens of this theoretical conscience. A poem called “Anxiety of Influence,” named after Howard Bloom’s famous critical book of that title, meditates on the strength of feeling and emotion, and in “A Poem for You,” Božičević writes:

I wanted
to write something called:

Portrait of the Immigrant as Your Little Pony.
About how all over America
I travel to sing my song that there is no song
About my bombed body as the site of abandonment,
& I’d be the critical darling, and they’d say She did it––

The poems draw together, too, a sense of foreignness and a fear of America’s beauty/terror reputation, and they travel through Božičević’s memory as an immigrant from a war-torn place. She’s able to make the personal social, too, in a way that lends itself to us asking, “What can we do as people?” I think the urgency of these poems is their chief recommendation, and they play with different types of diction to make a full, lyrical poetic that is not untempered by a little wizened salt for the taking, too. Božičević’s poems play with the tension between being and meaning, and she addresses her reader with an injunction to make the world mean, a travail of making: “You want this to mean something? / Then make it. Mean / Something.”

The symbolism and feeling that goes into the affect of metaphor is also part of this book. In “Controlling the Weather,” Božičević writes:

It’s always the hill’s elixir
at dawn or in twilight.

With either sprays of them, or
not: just a curve, gently planetary.

It’s the hill behind the stable if
there were no trees. And I

some cruise on which crying was not allowed.

She’s able to make metaphor personal––these are not poems of extended metaphor or narrative poems based on the assumption of an ironic stance (things we’ve all learned to love to hate, no?). These are lyric poems, a new lyric that is gently surreal and yet also critical and modern in all the right places. There’s a voice here, but there’s ambivalence (the perfect amount) about that voice and what it can possibly be saying. Here’s another critically-titled poem, “After Context”:

There’s a sincerity that presages many (perhaps all) of these poems, depending on how you choose to read them. Božičević’s poems are fresh, personable, NY-school to the core, which is refreshing. But they’re also able to discuss larger questions, and to be fully part of the world they inhabit. You could take each poem’s speaker as a different “persona,” sure, if you want to go Browning with these. But there’s too much of an identifiable here, which is what holds the book together. If, as Altieri foresaw years ago, there is a future for the lyric I, that place from which we begin to tell our stories, in all their messiness, then Božičević’s poems are a place to begin, as they set the tone for this practice in the poetry landscape today.

Rise in the Fall is available from Birds, LLC.