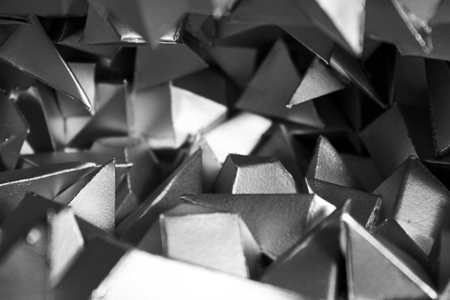 Say the word “geode” to most of us and we’ll remember standing at the kitchen counter with a hammer, bringing weight down on a ruddy brown rock, slamming until it cracked in half, until we could see the quartz sparkling inside.

For decades, those geodes formed in bubbles in volcanic rock, groundwater sneaking in to create layer upon layer upon layer over time, the layers eventually becoming quartz, calcite, dolomite, limonite, waiting for our hands to pound them open.

Now, imagine a world where geodes weren’t made from the earth, but instead grew from buildings in major cities. That’s just what Los Angeles-based Paige Smith, aka A Common Name, has been doing with her Geode Street Art Project. 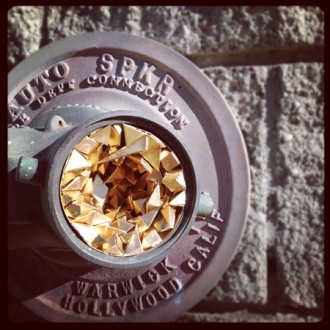 “It takes very special circumstances for a geode to develop,” says Smith, tucking a strand of her light brown bob behind her ear. She’s slight and tall, in an oversize red flannel shirt, with wide blue eyes. “I always liked the idea that man-made buildings could create geodes on their own. I know it’s a literary term, but I do like to think of my work as magical realism.”

Smith isn’t wrong. There is something magical, whimsical to her work. Picture it: You’re walking down a city street and in the cavity of a missing brick in a municipal building, someone has built what appears to be the inside of a gem tucked into a crevasse.

When I press her about the literature comparison, she lights up.

“Gabriel Garcia Márquez is my favorite,” she says. “I love [Haruki] Murakami, too. I just finished up Norwegian Wood. Pretty dark. [Marquez], though, he’s very magical. In one of my favorite scenes, someone dies and for three days it rains yellow flowers after. It’s such a beautiful mental image. The geodes, for me, are sort of in that vein.”

Smith’s in Philadelphia for a week, thanks to a collaboration between Paradigm Gallery and HAHA Magazine that seeks to bring global artists to the local community, finding funds to bring them to the city so they can showcase their work. HAHA Magazine had covered Smith’s work before. And when it came time to choose an artist to bring to the community, it was a no-brainer.

“We knew we wanted her immediately,” says Paradigm co-founder Sara McCorriston. “She has the same values we do when it comes to creating community in the arts, so it was a natural fit.”

Point being, Smith isn’t here for a gallery show to sell pieces. Instead, she’s here to make the city itself a gallery, leaving her geodes in secret corners to be found.

The urban geodes got their start when Smith became obsessed with photograph of a giant amethyst and wanted to recreate it from paper. She started folding tiny paper triangles, forming an array of geometric shapes meant to mimic the crystals.

In the Paradigm Gallery, sitting at a table full of plastic molds, she starts rattling off the shapes.

“I knew how to make a tetrahedron, but I thought there must be other polyhedras. And then I discovered all of these mathematical nets and I just kept discovering and discovering, staring at geodes as best I could,” Smith says. “Geodes are really hard to study, but I was seeing a lot of repetitive polyhedral shapes. I’ve honed it down to 12 or 13 shapes that I really like.” 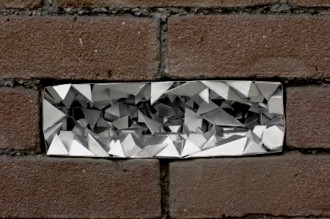 For her first piece, Smith found a space left by a missing brick in an LA building. She realized the shape was easy, perfect for her first attempt. She measured the hole and went home, where she started folding pieces of paper at night, filling a mold that fit the specs. She installed the customized geode mold, and it lived in the brick for three months before being worn away by the elements.

After that, Smith largely worked in paper folds to create the geodes, and they began popping up throughout LA. But eventually, she wanted to create the gems out of something more durable, stronger, that would last more than a few rainstorms. When it came time, she puzzled that out, too.

On the table in front of her at Paradigm, there are six or seven green and blue rubber molds, as well as two giant resin containers. 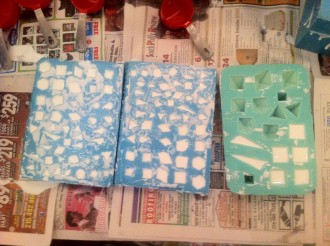 A few of Smith’s geode molds

She mixes the resin together and after 15 minutes or so, the “crystals” are set. She pops them out and pieces them together to create the geodes, painting them colors ranging from silver to gold to shimmering black to purple to electric green.

“I’ve always been a science nerd. I had rock collections when I was a kid, and really adore anything related to science,” Smith says. “That love of science is where the resin comes from, too, because it’s chemicals and mixing and I get really into that.”

Talk to Smith for more than ten minutes, and this sort of infectious nerdery slips out of her. She mentions almost casually how in order to create more cost-effective geodes, she found instructions on the internet about how to build her own roto-casting machine for her resin molds.

Turns out, resin isn’t cheap, so she wanted to find a way to create hollow resin crystals. She fills certain molds with resin, and then spins them constantly in her homemade roto-caster to ensure the stuff coats evenly, creating larger shapes for bigger pieces. When you hold them in your hand, the larger pieces are surprisingly light; it’s the solid little resin guys that feel heavy, weighted.

Now, she’s gone well beyond that paper-filled brick, turning empty phone booths and the grout between bricks in Spain into homes for her resin geodes.

“When I fit the shapes together, it’s always organic, and it’s always different,” Smith says. “I’m kind of puzzling. I start with one piece and put another piece by it and I start making my own shape each time. Sometimes, I create little problems for myself, but that’s part of the joy of doing it.”

It’s sort of like a version of Tetris wherein you build your own pieces, which would drive most of us insane.

“I love repetitive, detail-oriented tasks,” Smith explains. “They appeal to me. I have a lot of patience. I don’t know where I got it. My boyfriend hasn’t folded one piece. He picked one up and did one fold and said ‘I can’t do this.’ It definitely takes a particular mind.”

She’s right. The process of the whole thing is exacting.

When you watch her working, when you see how small the crystal shards are, it becomes clear it’s a painstaking process that requires an incredible attention to detail. Smith has a sort of nervous energy as she describes it, and she burns it off through this, building, crystal by crystal, piece by piece, an entire geode. Depending on its size, that can take days, sometimes weeks, to create.

“The Standard in Hollywood commissioned me to do a five-by-ten box behind their vitrine,” she says. “I planned to go insane, but I went really insane. That one took forever.”

You can see The Standard piece behind the vitrine, in a clear glass box. It’s become famous because The Standard has models lay inside the giant geode box every single night in their underwear. 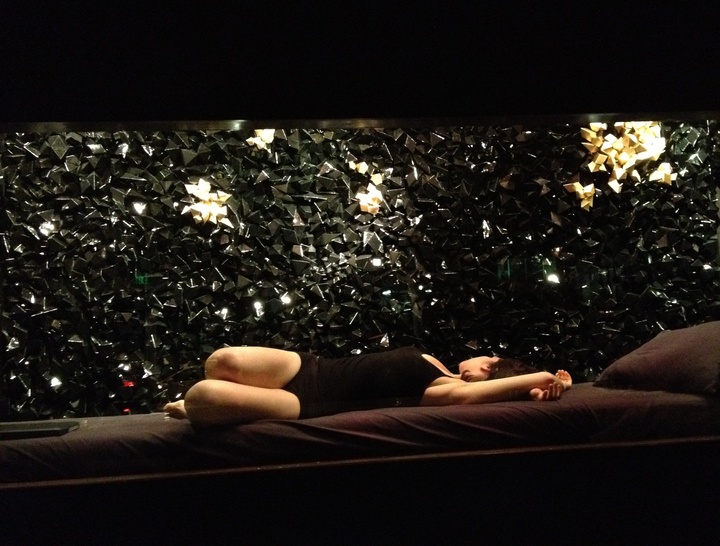 Beyond the Standard, she’s also installed at The Viper Room, and shown in galleries.

But still, the street pieces remain her favorite. She gets energetic discussing the street art in LA, how murals are taking over the city. Asked who her favorite street artists are, she immediately mentions Swoon, Os Gêmeos, and Space Invader, whose work pushed her to begin to build the geodes coming off of buildings, expanding out. She’s also been expanding in another way.

“I started getting letters from people all over the world, from Turkey, Jordan, South Africa,” she says. “They kept saying how they wished my work was in their town. So I started mailing them geodes with instructions to install them, or sometimes just the pieces themselves so they could build them.”

I ask her if she’s ever been busted installing a geode, if it’s illegal, if the cops have ever come down on her screaming “HANDS UP, CRYSTAL GIRL!” and she lets out a laugh.

“No, nothing like that. Mostly, people are curious about what I’m doing. I did have a homeless woman watch me install one piece. She loved it so much – she promised not to let anyone touch it. She said she’d watch over it,” she recalls. “But no, no cops. Plus, I do a lot of pre-planning before an installation, taking perfect measurements, and I do a lot of the installations at night.”

But in Philadelphia, this week, that will change. Smith’s locations for her geodes have been predetermined by Paradigm, HAHA, and Streets Department. There are four planned installations, with hopes of more. The installation locations are kept secret, even from me, even when I pry.

“Can’t tell you,” Smith says. “I don’t even know where they’re going.”

But this is part of what makes Smith’s pieces work — most times, the geodes aren’t just handed to you. You can’t join crowds of hundreds to cattle through a museum and catch a glimpse. Instead you have to look up, you have to look at your surroundings, you have to search and hunt. And if you’re lucky, if you’re very lucky, you’ll notice a small sparkle, and you’ll look down into a gouge in some grout or the hole in an old fire hose connector and you’ll find one of her geodes.

It’s not until after the interview, after I leave Smith in the gallery, with the molds and the blank white resin chunks that will turn into sparkling geodes that, I realize I still haven’t seen any of her work in person, that I haven’t ever found one of her geodes, that there’s still so much to hunt for, to break open.

“I want these geodes to inspire you to get away from everything that distracts you,” Smith said before I left, popping plain white crystals out of the molds. “It’s that way for me. Every time I make a geode, I do feel like I’m uncovering it, too.”