Other People’s Diaries: An Interview With Mira Gonzalez 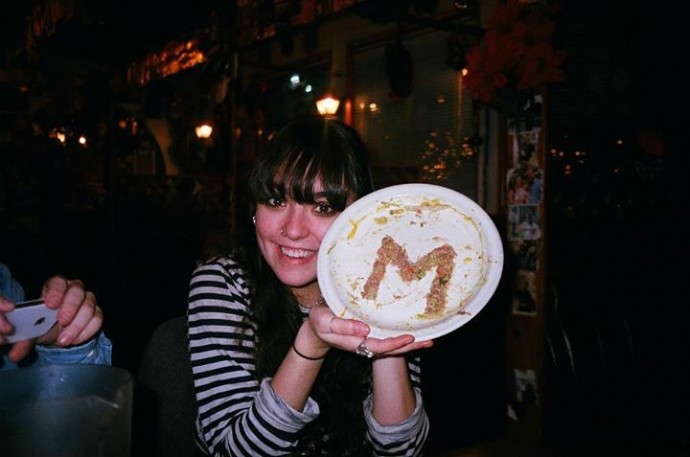 Mira Gonzalez’s debut poetry collection, i will never be beautiful enough to make us beautiful together was released from Brooklyn-based independent publisher Sorry House in January 2013 and quickly earned the praise of Melissa Broder, Tao Lin, VICE, Victor “Kool A.D.” Vasquez and the Rumpus (among others).

The poems found in i will never be beautiful enough to make us beautiful together are thoughtful and intimate, portraying delicate moments of experience, thought and language. Though her book sold out its first print of 500 copies within three months of publication, Mira’s largest body of written work may be that accessed through her twitter accounts (@miragonz and @miraunedited).

Mira tweets frequently. Her voice is stark and original, documenting minutia and oscillating between interiority and observation. Frequently, Mira’s tweets find humor in moments of deprivation or loneliness. Though its text is ongoing, reading Mira Gonzalez’s twitter is not largely different from reading a collection of poetry or a writer’s journal.

Like much personal writing, Mira’s tweets provide otherwise private information; they offer readers the sensation of “knowing” the work’s author and the self-consciousness that accompanies it. Other peoples’ diaries are almost always fascinating, but reading them still makes us feel kind of creepy — even if they are left out in the open, or made public on the Internet. 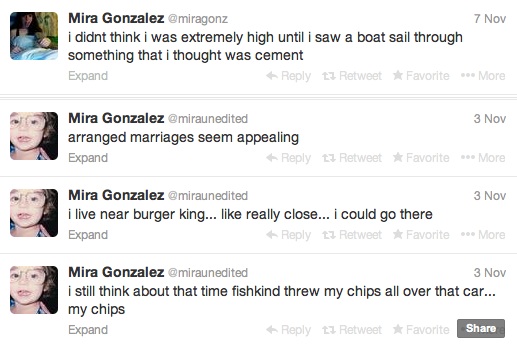 FANZINE: I’m interested in your take on self-presentation in literary culture, particularly in terms of the Internet. You have a very large online following. Do you think of your twitter accounts as creating or nourishing a certain persona?

MIRA GONZALEZ: This is a question I get asked a lot and I never feel completely sure how to answer it. I guess I am crafting a ‘persona’ on my twitter, but only as much as anyone creates a persona in any situation. In real life, people show or hide aspects of their ‘personality’ depending on the situation. I do the same thing on the internet, in that I choose what to tweet about and what to not tweet about, how to word the tweets, what pieces get published where, etc., but none of it seems ‘fake’ to me, if that makes sense. I don’t feel like I’m pretending to be a different person than I am and I never lie about things when I tweet about real-seeming occurrences in my life.

FZ: Fanzine recently spoke to Steve Roggenbuck about levels of identification with and dissociation from the term or role of a ‘poet’; I’m not so much interested in whether or not you self-identify as some sort of ‘bard,’ but I am interested in how you think about language in different mediums. What differentiates what goes in a poem or a tweet or somewhere else?

MG: I’m not sure what exact perimeters define what I tweet or what I put in a poem or what I put in a short story. I want to say that I just do what ‘feels right’ but I think that might make me sound like an asshole. I don’t know.

FZ: I was wondering if you’d want to talk about the ‘live-blog’ or ‘live-tweet’ as a form. I really enjoyed reading Megan Boyle’s live-blog and have also read you and Tao Lin live-tweeting various movies, experiences. What do you think you get out of live-blogging/tweeting something? Do you have a readership in mind?

MG: I like live blogging/tweeting things. It feels like a fun activity for me because I get to write but it’s an easy format and there is minimal pressure. I also have a hard time sitting through movies so live tweeting makes that easier/more fun for me (although if I really am interested in a movie I probably wont live tweet it because it’s hard to fully pay attention when you’re typing). As far as live blogging life events, that seems good too. I guess my twitter(s) is/are like that to some degree. It feels important to me to write about important events in my life.

FZ: In a more general sense, how would you describe the role of privacy in your poems and use of the Internet? Do you think about honesty or exposure differently somewhere like twitter than in published poems?

MG: I try to be as honest and exposed as I possibly can. It makes me feel less alone and less prone to lying if I don’t try to hide anything from anybody, including people on the Internet.

FZ: One of the poems in your book ends with the lines “what is the difference between being an independent person/and being a person who is accepting of loneliness”; do you feel this is a question you have answered, or one that still haunts you in some form?

MG: I feel like there is no difference, which seems comforting, to me. The question still bothers me often though and I’m sure it will continue to bother me for the rest of my life, or at least a very long time.

FZ: How does humor relate to sadness/loneliness/crippling emotions/negative feelings in your writing?

MG: Sadness/loneliness feels funny to me a lot of times. That’s not to say they are positive emotions. I don’t enjoy feeling sad or lonely. It does seem important, or at least useful in my own life, to recognize how small and insignificant I am, as one single person, and how I will continue to have negative feelings repeatedly for the rest of my life. That seems funny to me, and recognizing the humor in ‘negative’ emotions often takes away some of the power the emotion has over me.

FZ: In your poem “I am going to stop eating” you say you want to snort Ambien. Did you ever do it? Once I snorted Ambien by myself in a motel in Wyoming. What was your experience like?

MG: I’ve actually never snorted Ambien. Ambien seems like a really scary drug. My younger brother and i had similar experiences of taking Ambien on an airplane and feeling like the plane was going to implode on us.

FZ: Recently, I’ve noticed you’ve been fielding questions on ask.fm. What’s the most memorable thing someone has asked you?

MG: I’ve answered over a thousand questions so I’m having a hard time remembering one specifically. One guy(?) kept asking foot fetish questions though. Like wanting to know if I like having my feet tickled and kissed. I ended up posting a photo of my bare feet. Seemed endearing.

FZ: Do you think of answering those questions as something you do primarily to amuse yourself, or for the benefit of those asking and/or reading?

MG: Probably both equally but the original motivation to make the account was for my own amusement.

FZ: You have sort of a reputation for liking burritos. Do you miss California burritos? Have you found an apt substitute in New York? Are you good at making burritos for yourself? I think wrapping the tortilla is really hard. Can you do it and do you have any tips?

MG: I miss California burritos more than anything and nothing in New York compares. Mexican food here is bullshit except I’ve had some okay tacos. I can make an okay burrito but honestly no burritos compare to the ones my stepdad makes. Chuck is a pro.