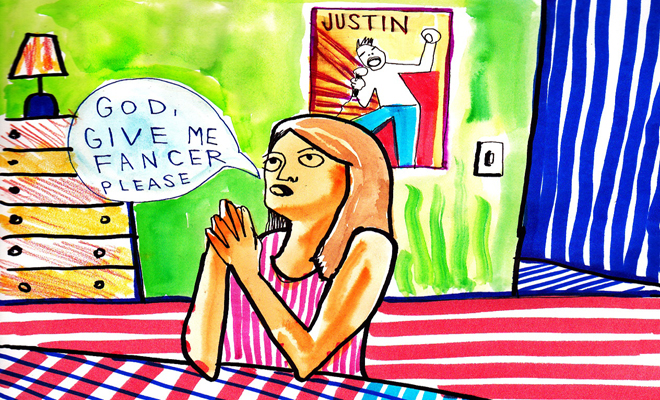 The students of Ms. Jefferson’s fourth-grade class fidgeted restlessly in their seats as their teacher took the morning roll. “Emory Stephenson, Amanda Summers, Janet Temple,” she half-heartedly called out as the students matched her enthusiasm with various grunts and barely-raised hands. “Brooke Vandergraaf?” Ms. Jefferson expected to hear Brooke’s mellifluous voice rise from the crowd but was met with unexpected silence.

“Brooke?” she called out again. A quiet murmur went through the class. Brooke had a perfect attendance record. In fact, Brooke was practically perfect herself, with a symmetrical face, flaxen hair and all of her adult teeth already. “Does anybody know where Brooke is?”

A hand shot up from the desk behind Brooke’s. Madison Epstein considered herself to be Brooke’s very best BFF, unaware of what those letters already stood for. After all, with her Aryan beauty and WASPish charm, Brooke was exactly the kind of girl young Madison wanted to be.  So naturally, Madison knew everything that was going on in her life.

Across town, Mr. and Mrs. Vandergraaf gripped hands in the mahogany-paneled office of Dr. Chestnutt, an expert in his field. He shuffled uncomfortably in his coffee-colored suit as he went over the papers in front of him.

“I’m sorry…” he began. The Vandergraafs started to wail.

“It’s not fair!” screamed Mr. Vandergraaf, tearing open his shirt, the light bouncing off the perfect Dutch curls of hair on his chest. “Take me instead, oh Lord!” The doctor, a confirmed atheist, sat and watched in silence.

“Is something wrong?” asked Brooke from a wheelchair as her unusually silent parents pushed her down the hospital hallway. They tried to ignore her.  “Daddy?” said Brooke, the sunlight glinting off her perfect teeth. They wouldn’t even have to pay for braces. It just wasn’t fair.

Mr. Vandergraaf took a deep breath and tried to tell his delicate princess the truth.

“Wow,” said Madison, the phone pressed to her ear. “I didn’t even know there was a fancy kind of cancer. You’re so lucky. First you get that awesome Tinkerbell backpack and now this.” Madison set her phone on the vanity and put Brooke on speaker. As her friend buzzed about just how special her tumors were, Madison pulled out the blush she found in the dumpster outside what used to be Borders. She applied it liberally to her face and smiled into the mirror, her reflection surrounded by dozens of clipped-out pictures of beauty queens.

Downstairs, her father was spending his time as he did every evening: slumped in his recliner with a glass of whiskey in one hand and a picture of his dead wife in the other. She had been so beautiful, like a more approachable version of that woman who had played Janice on Friends.

“I want cancer,” said Madison, suddenly appearing in the doorframe.

“Why would you say something like that?” Mr. Epstein asked, his gaze still fixed on the picture of his wife.

“You know my friend, Brooke? You know! Brooke? My friend? My friend Brooke?”

“Yes, I know!” lied Mr. Epstein, unable to recalled a girl named Brooke or anyone from his daughter’s life for that matter.

“Well, Brooke has cancer,” said Madison. “Well, not cancer, but fancer. You know, the fancy kind of cancer? And, well, everyone’s always complimenting Brooke on her clothes and the way her hair sparkles in the sunlight and now she has this amazing disease and I don’t want to be left out.”

“Fine!” screamed Madison, stomping her feet. “I don’t need you. I don’t need anyone! If you don’t want to help me, I’ll get cancer all on my own!”

Madison stormed up to her room and printed out a list of things that cause cancer. She tucked the list under her pillow, and fell asleep, her head swimming with dreams of illness.

After school, Madison hurried home and drilled a hole in the front of the microwave before turning it on. That night, she examined her body but didn’t find any of the lumps one would associate with cancer. The next day, she was banned from the tanning salon after locking herself in one of the booths for an hour but still, the benefits of cancer eluded her. She began sleeping with her cell phone next to her head. She ate all the processed snack cakes she could find. She even broke into the old McMurray place and started tearing asbestos out of the walls! And yet, when she finally tracked down that dog she had seen on the news that could sniff out tumors, it just tried to hump her leg instead.

“It’s not fair!” she bawled to Brooke as a variety of machines designed to keep the sick girl alive beeped and clicked in the hospital room. “I’ve tried everything and I still don’t have cancer, let alone fancer!”

“Everything?” wheezed Brooke as she set her sunken eyes on her more Semitic friend.

“I even tried to order cigarettes off the internet but all my dad’s credit cards were declined,” said Madison.

“There’s still something you could try,” said Brooke. “Plutonium.”

“What?” asked Madison. “There’s no way I can afford that.”

“Don’t you want to be…” A fierce coughing fit interrupted Brooke’s question. “…cool?”

“You’re right.” Madison rose from her seat and gazed out the window. Outside, the American flag flapped in the breeze as a veteran in a wheelchair rolled past. “I have to fight for what I believe in.”

The crowd pressed up against the barricade the police had set up around the power plant. Awash in the alternating red-and-blue lights of the cruisers, the police chief held his megaphone in front of his mouth. In all his years on the force, he had never seen anything like this.

“Let the hostage go!” he boomed.

“Not until you meet my demands!” screamed Madison from atop her step stool on the other side of the barbed wire fence. She edged the blade of her boxcutter closer to the hostage’s neck.

“She’s not going to relent,” the chief told his sergeant. “Do the snipers have a clear headshot?”

“Wait!” screamed Mr. Epstein as he pushed his way through the crowd. “That’s my daughter!”

“Your daughter’s a threat to national security,” said the chief.

“Please, she’s just a threat to herself,” Mr. Epstein explained, taking the chief aside. “You see, she’s trying to give herself cancer because she thinks it will make her cool.”

“Did someone convince her that there was a fancy kind of cancer?” asked the chief. Mr. Epstein nodded. “Happens all the time. Well, you might want to try talking her out of this whole thing before my snipers have to take her out.”

Mr. Epstein took the megaphone and walked past the police. The cameras from the local news station turned their attention on him as he attempted to plead with his daughter.

“Right. Madison, honey, you need to let that man go.”

“I’m not leaving here without my plutonium, Dad!”

“I know,” said Madison. “I want fancer, the fancy type of cancer.” Mr. Epstein began to sweat as people behind him started to mutter “…terrible father…” and “…idiot daughter…”

“I know you think that Brooke is cool for having cancer, but I can assure you, she’s very, very sick.” Suddenly, the crowd parted as a black Cadillac pulled up. “Here’s Brooke and her father now. If you don’t believe me, maybe you’ll believe them.”

The door to the sedan opened and Mr. Vandergraaf exited by himself. Head hung low, he walked over to Mr. Epstein.

The next day, Madison sat by herself at the picnic table during lunch. The police chief had told her that what she had done technically counted as terrorism but, since she was white, they weren’t going to press charges. Her father had scolded her all night about how being cool wasn’t the most important thing in life, not when beauty was still a factor, before passing out in a drunken stupor. Now, she sat alone and unpopular in front of a tray of soggy chicken nuggets while she thought about her deceased best friend.

“Hey,” said Emory, one of her classmates, as he walked up with Amanda and Janet. “I saw you on the news last night.”

“Yeah,” said Amanda. “The newspaper said you were a terrorist. You’re, like, famous now.”

“Can we sit with you?” asked Janet. Madison smiled and scooted aside as her classmates sat down. In a few minutes, Madison would get her first period, brought on early by years of consuming hormone-filled meat products, but for now, she just laughed with her new friends, breathing in the tainted air from the eight-lane highway that bordered the school.  As they watched the sun shine down on them from over the cooling towers of the power plant, which was just next-door, Madison laughed. Now that she was popular, she would never have to worry about getting cancer again.