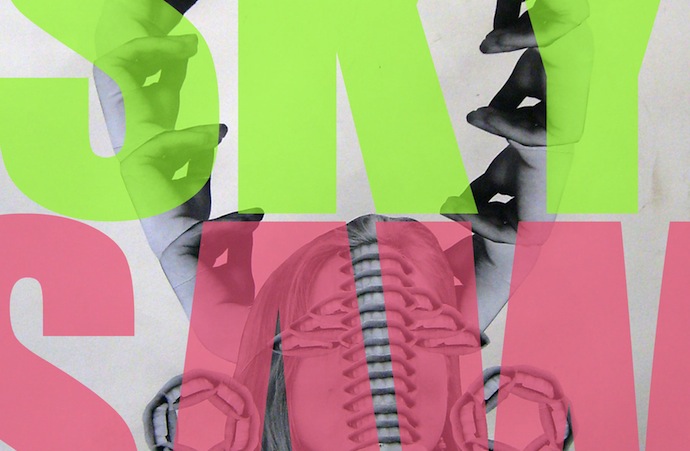 Blake Butler’s writing, at times, seems solely crafted for the purpose of making his readers squirm. Composed of sentences that showcase a gift for the macabre that is also startling in its subtle beauty, Butler’s latest book, Sky Saw, immerses itself in territory immediately familiar with his long-term fans: anonymous protagonists who feed off their own fat and cough up birds, keys, and couches; apocalyptic dream-scenes where there are “a billion bodies lost and rotting,” with streets “cracked in so many places that the asphalt resembled undentisted teeth, the gaping mouth of which would suck you in alive with stench.” This is an environment crippled by “nauseas, fear, contusion, gorgons,” also “half-hung memories of glee––old warmth hidden in some no longer present feeling.”

It is complicated and brutal.

The central protagonists of Sky Saw––Person 811 alternatively referred to as the father, Person 1180 alternatively referred to as the mother, and Person 2030 alternatively referred to as the son––affect a sort of trilogy, occupying the same space and breadth within the work. These characters often act as simulacra of each other, experiencing similar transmutations––changing in ways that reveal their similarities rather than differences. The string that unites each character is a shadowy presence simply referred to as the Cone, which steers the actions of the characters and the world they inhabit. The Cone, at points, defies a symbolic interpretation, its emanating “tone” carving a path for the mother, father, and child, rendering them anew throughout the novel. The deference Butler places on the Cone seems, at once, spiritual and institutional. Is it part of some Nameless Authority, a quasi-governmental entity as hinted at in the work? Is it deity-like? Does this matter?  Butler frequently uses a metaphor of film, a means to capture an image, throughout Sky Saw. Film ruptures, coats, engulfs, and consumes the world inside this book, as if the image projected––or the image ensnared––exists as something more permanent, more real than the subject being documented. It is an arresting thought. There is an impetus for an examination of these characters, their motives, and the greater world sluiced around them, which leads to an unique interpretation of their natures and the novel itself.

Person 1180, the mother, the wife, is offered up by Butler as a vehicle for birth. Captive to the act of giving labor, no title is given to her beyond her number other than the function of her sex. Early on in the novel it is revealed that she has “given birth twenty times” over the span of five days,  but the “pregnancies were swift and brutal” and always terminal. Butler catalogs the births, each seemingly more horrific and unimaginable than the last, the children entering the world as smudge, scum, stippled magma, or spooling ropes upon ropes of jumbled cells. A child is made of paper, another a trembling wash of cells that won’t stop running.  One is gifted with the ability to tell the mother’s future.  Its sibling, once birthed, reeks of biscuit gravy. These births seem to act less as a ledger chronicling new life, or at least the attempt at new life, than as a parallel to the mothers own existence: “following a similar structure to the system of her aging, if reversed––one for each year, young and coming, if all crammed into such a short amount of time––the same spiral cut procession seen in all things, of all things one after another––new infants bloating in her as if in instants,” the children’s physical attributes are telling; each life fleeting, ephemeral, becoming something less tangible than the body of a child, defining the mother’s image as an instrument of change. Later the mother builds a house from the excesses of her flesh, birthing a home that morphs, revealing doorways and portals of its own design that lead to an outer-world that seems to subsume the original nature of the home, a machine that breaks down––as if unpredictability is the only thing capable of sustaining itself in the warped landscape Butler creates.

Of the mother’s numerous births, the only child to survive is Person 2030. The child is described as having a porthole in its skull which the mother would look through and sometimes see things crawl in or out. His growth is accelerated, and he takes on a warbled image of Person 811, his father. Person 2030 grows a mustache that the mother shaves each morning with a electric razor the father has left behind. In the child’s presence, a locking necklace given to the mother by the father with her photo pasted inside it sometimes takes on the image of “blackened paper” or a “tiny wedge of mirror.” The imagery employed by Butler is stark and unsettling, and seems to marry and muddy the individual characters of the son, father, and mother in the reader’s mind even when Person 811 is not present.

Person 811, the father, is separated from his family at the onset of the novel.  Awakening in an alien locale, he travels alone in darkness while being surveilled by a headless antagonist with characteristics mirroring his own. The father’s journey to reunite with his family is fraught with frustration, subterfuge and confusion. He is haunted by ghost images of the Person 1180, undergoes a bewildering physical transformation, and beset by numerous technological obstacles.  In an attempted reunion with the mother he finds: “a field there stuck between them, not all unlike the mirror glass or any widow framing day, though at once thicker and thinner, wider and nearer, there all at once and not at all there, black beyond black.” The father and the child seem to never inhabit the same physical space at the same time, instead trading places in a series of “blinks”––chaotic exchanges of space and time, a whirling change––where the father is at once the son and the son at once the father. This theme runs roughshod through Sky Saw; change slaughters then reconstructs its characters. Which seems fitting for a novel mired in a prolonged astonishment with transformation––a weird kind of hope that unravels upon itself over each page.

Sky Saw is available for purchase from Tyrant Books or Small Press Distribution.