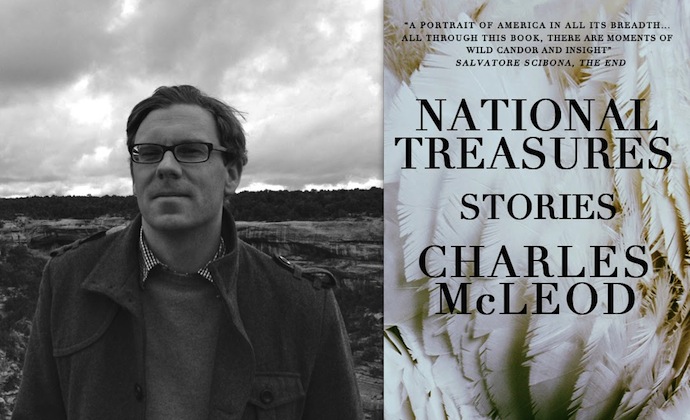 A collection of twelve short stories, Charles McLeod’s National Treasures is a mourning quilt: each story a patch, holding together an object that provides warmth because it recollects loss. It is also an atlas, the sort that contains loose Polaroid pictures of landmarks seen during the course of one’s lifetime. But for McLeod, the term landmark (see also: national treasure) does not define the monolithic objects or mythic locales with or on which another generation has sought to be memorialized. Instead, the term calls to mind those contemporary Americans and their habitats that achieve fame through figuration, despite the fact that they are often blanketed by anonymity and left to be forgotten. This is to say that McLeod’s characters appear more as investigations of contemporary American archetypes, as stories feature hippie terrorists, divorcees, teens on the run, body artists, ex-cons and addicts, prostitutes and their local clientele, the bullies and the bullied, and those of us who auction off the objects on which our lives have been inscribed.

Rather than satirize twenty-first century American values as he had done in his first novel, American Weather, McLeod’s portraiture of American life in National Treasures offers a rather ‘honest’ attempt to take the pulse of a population and a diverse natural environment that has endured the effects of suburban sprawl, nuclear weapons testing, altered atmospheric shifting, climate change, the drug war, inequality of all shapes and sizes, and the secularization of marriage. I put the word “honest” in scare quotes because literature, by its very definition, is not honest. Or rather, put positively, literature is a lie.

I underscore literature’s deceptive quality because like the narrator of the story “Individualized Altimetry Stripes” and her clients, I too am after “something that sums this all up without saying it outright” (76). To be sure, each story maintains a distinct form and manner that reflects what it contains. Yet, the stories are also connected to each other as certain places, characteristics, and objects repeatedly appear throughout the collection, linking the pieces together and forming a sort of geometry that demonstrates McLeod’s penchant for cohesion. More concretely, the repetition of objects such as trees and birds, places such as Eden and the Great Lakes region, and characteristics such as sun tans (mostly artificial in nature), solitude, and sexual deviance (if one can use such a term) coalesce to make the reader aware of McLeod’s interest in how an individual’s desire not only affects others, but also influences the very environment in which one lives.

However, if I am really to strive for a response to National Treasures that “sums it all up without saying it outright,” I would be remiss if it I did not at least mention the collection’s most aphoristic statement: “trauma (my brother) both debts and affords, the results often scary” (217). Void of opulent details, McLeod’s writing commandingly and pragmatically observes how the effects of traumatic events are socially, biologically, psychically, and ecologically transmitted. It is the legacy of these transmissions that McLeod so masterfully portrays that makes the lie that is his fiction such a gripping, thoughtful, and necessary work. To say this is not to suggest that the lies that are his stories are untrue. It is, instead, to argue that McLeod’s National Treasures is one of those rare achievements when literature bears witness to that which would otherwise remain unacknowledged, not because it does not exist, but because we are afraid or somehow unable to speak of it.

Despite the often grim subject matter of National Treasures, there are several characters who seek a way to leave the pain that they have inherited. The effort of these characters is made all the more relevant given that the book’s front and back covers greet the reader with an image of feathers. While birds appear in many of the stories contained in National Treasures, the wings that appear on the covers of this book suggest something less literal, perhaps something more metaphorical, as if to imply a need to leave, to travel, and to do so without the hope of teleology or the redemption televised by fast-food dogmatism; to travel, instead, without destination and so long as we are capable, and so long as we have feet or tires and there be roads and paths to travel, and so: “I urge, while you can, listen less and see more, before what lies ahead turns to dots in the rearview, before life is a marker long passed and well gone—[…]do not let this world catch up with you, ever, and if it knocks, do not let it in” (233).

National Treasures is available through Outpost19.