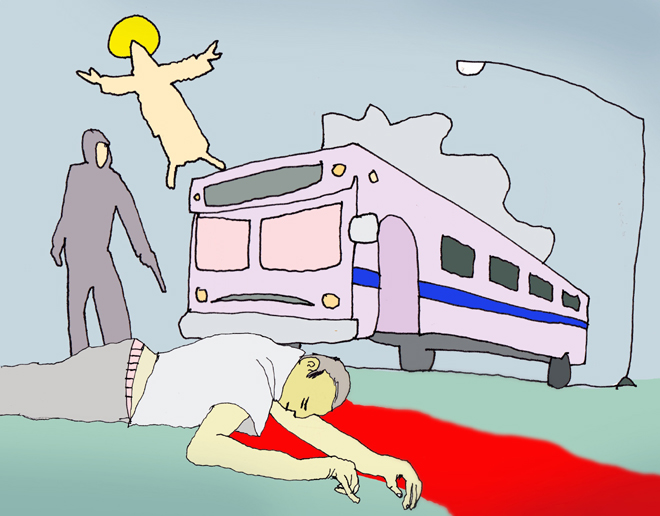 I leave the house because it’s a better chance of getting killed off out there all at once. I’m sure the apartment I live in is killing me off but it’s taking its time so far and it might take years to finish. Why I think this is my eyes always burn in the apartment and I cough a lot. I try to remember to buy eye drops and cough medicine when I leave the house but I almost never do remember. Why I don’t remember is I think about getting run over by trucks or shot to death by hoodlums instead. I see the trucks speeding by and imagine what it’d feel like to get run over by one. I’m sure it would hurt. I saw a movie once where a woman was run over by a truck and she lived on for about five minutes afterwards. This woman was covered in blood and lying face up on the concrete after she got run over by the truck. Actually, I think it was a city bus that ran her over, but what difference does that make after you’re run over. Once you’re run over it doesn’t matter what kind of vehicle did it to you. She didn’t understand what had happened or why it happened to her. This is something I know all about. I don’t need a city bus to run me over to not understand what happens to me and why. The list of things that I don’t understand about the world could fill up four city buses if not more. I shouldn’t even get into it so I won’t, except to say that I don’t know what it is in my apartment that’s killing me. There’s some kind of poison in there, coming in through the pipes or up from the basement or down from the roof. But I’d rather get into this woman, whose legs had been separated from the rest of her, I think. I was trying not to look so I can’t say for sure what happened. It seemed that part of her had been severed, part of her was elsewhere. Maybe it was parts of her that were elsewhere. It wasn’t what I wanted to see as I don’t like the sight of blood, of parts, of ripped open innards. I imagine it’d be the same if I’m the one run over, that I wouldn’t want to look down and see what parts of me had been separated from the rest. I’d rather look straight up at the sky. Maybe it’s a cloud up there, a cloud that looks like something else, maybe a president or Jesus. I’ve never seen this kind of cloud but I’ve heard other people do. I think that’d be a nice thing to see after getting run over. This woman that did get run over, though, she didn’t look up at the sky at all, let alone see a cloud that looked like Jesus up there. A young lady was trying to comfort the woman as she lay dying, the parts that remained intact. She cradled the dying woman’s head in her hands. I wonder if I get run over by a truck if someone would do this for me. I don’t think anyone’s ever cradled my head before so it seems doubtful they’d start then. This woman that got run over, though, she had a nice head and I’m sure some people cradled it before the truck ran her over. People probably took strands of her hair and tucked them behind her ears. They probably smiled as they did this to her. This woman, it appeared as if she didn’t want to get run over by the truck that ran her over. It appeared that she had better things to do than get run over by a truck that day. My thing is most days I don’t have anything better to do, so if I do get run over by a truck I hope this comes across to whomever might see me lying there. I hope they realize that this man had nothing better to do today so it’s just as well this truck ran him over. I hope they realize that this man’s apartment was killing him off anyway and that it was best to get it over with all at once. Maybe this’ll be the day that I finally do remember to buy eye drops and cough medicine. Maybe the truck will run me over on my way home from the drug store and the person that cradles my head in the street will go through my pockets for identification and find the drops and medicine. Maybe I’ll ask them to pour some drops into my eyes so they won’t burn as I look up at a cloud that looks like Jesus. Even still, I should think I’d like a hoodlum to come over and fire two rounds into my head rather than have this same hoodlum cradle me in his arms and then have this hoodlum pour eye drops into my eyes so I could look up at the clouds. I should think I’d like everything to end all at once and forever should it come right down to it so to hell with the cloud that looks like Jesus. Sometimes when I do go out into the street and walk around I try to eyeball the hoodlums to see if they’re really as tough as they seem, see if they want to throw a couple of shots my way because that’s preferable to getting run over by a bus, depending on their marksmanship. The list of what I don’t understand might take up twelve city buses but I at least know that much about the world.

Robert Lopez is the author of two novels, Part of the World and Kamby Bolongo Mean River and a story collection, Asunder.