The following vanity license plates were photographed on two separate ten minute walks around my neighborhood in Albany, New York. There was a man (I presume most vanity plate owners are men) named TINMAN 3 I really wanted to get, who was often parked outside my house, who I believe was fucking the woman across the street behind her boyfriend’s back (forest green BMW, no vanity plate), but TINMAN 3 has disappointingly disappeared in the past several weeks and I miss him. So here are the others.

Some personal history: I’ve never owned a vanity plate but I did hit a parked car once in a Target parking lot five years ago, whereupon I left a note, whereupon the owner, FROSTY 2, called the cops. I was twenty miles away when I got the call to “drive back to the scene of the crime.” It cost five hundred dollars to repair a white four-inch-long cat scratch on FROSTY 2’s car. I forget the model. I forget almost everything about that evening but I could describe in painful detail the woman herself, FROSTY 2, in a word count sure to keep this essay from publication. Never forget FROSTY 2. Vanity plates and their owners have a way of digging a place for themselves inside you. Maybe that’s part of the appeal.

Vanity plates have to be purchased. In New York, depending on the type (you can get pictures and sports teams on them now) it’s about sixty bucks plus an annual fee (!). There’s more to this. A human has to drive to the Department of Motor Vehicles with his original letter/number creation in his head, fill out paperwork (I imagine green and pink paper), wait in line (so many Dad jokes and clichés), explain where the name comes from (people lie, like the woman in Virginia who wanted HAISSEM, which isn’t just a name, it’s MESSIAH backwards) and then, yes, pay money to have your original letter/number creation machine-pressed by a New York State convict who is paid forty two cents an hour.

I never see these vanity plate people. They baffle me. I wonder if they throw house parties for just themselves to attend. My facial expression when I witness a vanity plate is like no other facial expression I make, a combination of disgust, confusion, and exhaustion. Think Cobain unplugged catching his breath at the end of “Where Did You Sleep Last Night” and you have some idea. Rarely do I see a vanity plate and think, “Wish I had that,” although I did read about a “controversial case” involving a Florida man who fought, and won, to keep his plates – ATHEIST. 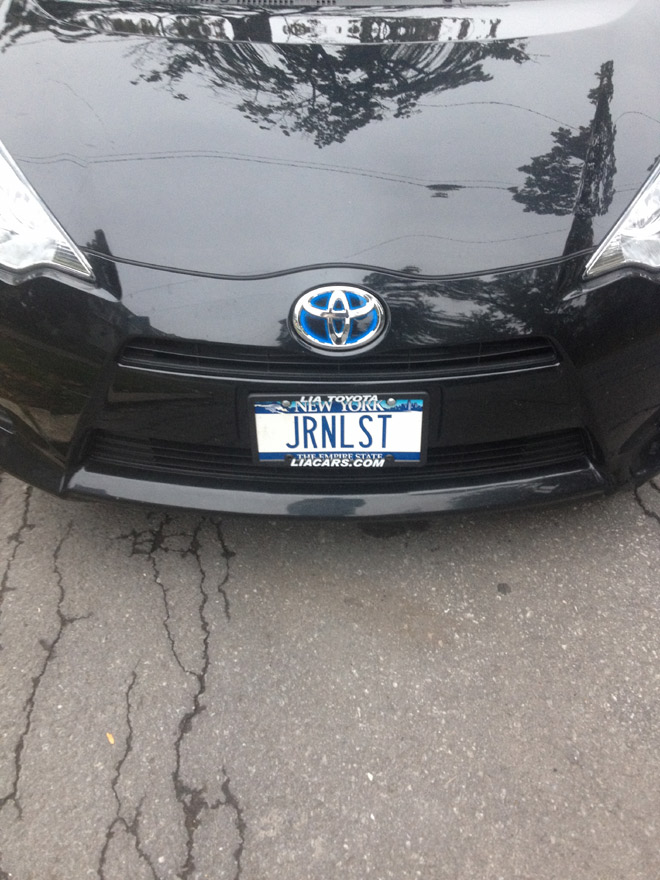 I can’t understand why someone would put “writer” or “poet” in their twitter or facebook bio, so this irks me on a Jonathan Franzenian “the world is fucked” level. Maybe I’m reading it wrong. JRNLST… is…JOURNALIST? Someone so totally consumed by their profession and passion, someone who identifies no less than one-hundred-percent of the time as a writer, that they want, they need, everyone to know who they are. I’m trying not to be cruel here, but I can clearly see this person smugly filling out the vanity plate forms in loopy cursive, eyes glancing above bright orange framed glasses. A common archetype for vanity plates in my area is just a name (see below reference to my landlord). I’ve seen CHRIS K and SUZY T, and for whatever reason, I find them charming. They make me smile. There’s something so insanely simple and “smallish” about a name (“hey, it’s me, ERIC S”) on a vanity plate as opposed to say BIG D 69, SUPRMAN 1, or, JRNLST. 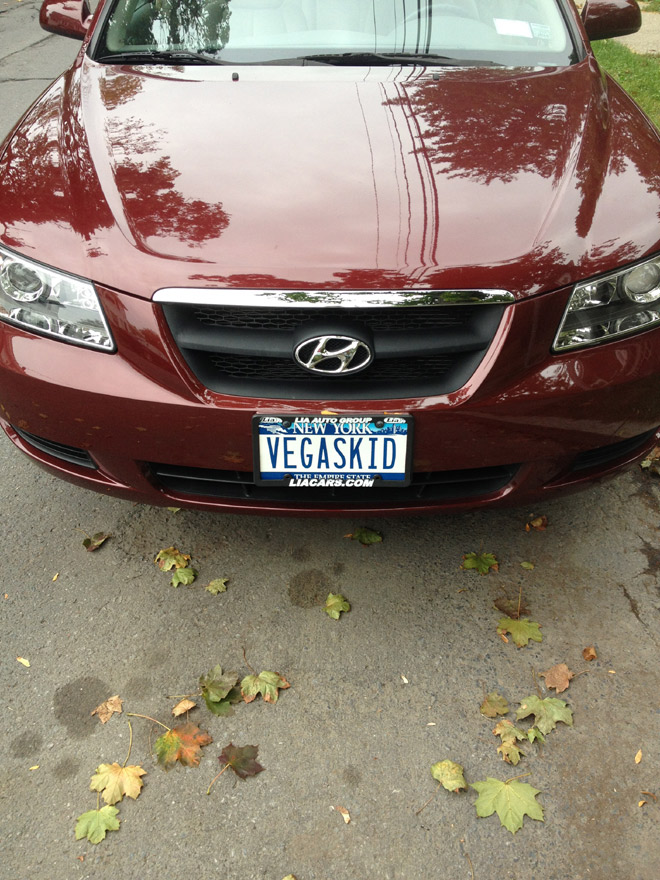 My dislike for the VEGASKID is insurmountable. He is perennially parked on the same block as JRNLST, usually directly behind or in front of, and I imagine they live together, a husband and wife duo so epically insufferable my brain goes into a kind of computer standby mode if I think about them too deeply.

A personal favorite and the most sighted vanity plate on my street. The parking spot of HOTSAWCE changes frequently, but I’ve never actually seen him (the windows are tinted and I did see him driving once and shouted HOTSAWCE! inside my car while eating an egg sandwich, but all I could see driving was a shadow, or smoke in the form of a human, or maybe a man in a cloak and black top hat, all which seems about right). As you can see above, the car is red. It’s a very sporty vehicle, especially because it’s red, but it’s also a Pontiac Solstice which from my research HOTSAWCE paid about thirty thousand dollars for in 2009 before the model was discontinued. I’m continuously surprised that HOTSAWCE is never, to my knowledge, vandalized in any way. In my neighborhood I once watched a grown man karate kick a hotel-esque flower painting put out on the curb just because he wanted to see it destroyed. Everyone respects HOTSAWCE. You don’t fuck with HOTSAWCE. I want to be his friend. 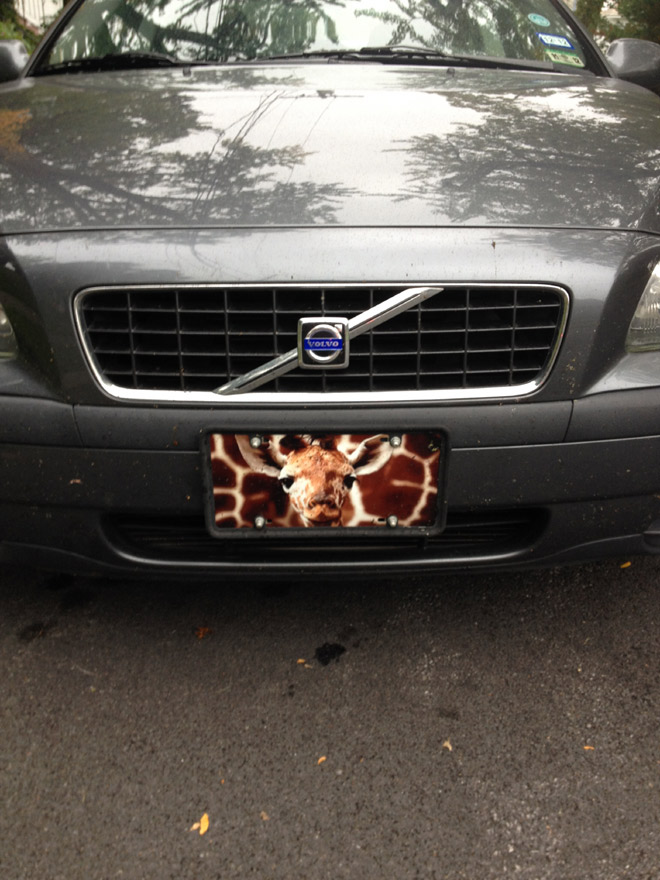 For your vehicle to be street legal in New York State (other states differ on this rule), you need plates on both the front and back, not a NY plate on the back and a giraffe on the front. This person actually lives near me–we’re in the same pool of success and social strata, basically–and it’s truly humbling in a way where I should maybe put a fucking panda plate on my Volkswagen Golf. How does Giraffe Man get away with this? I want an animal vanity plate. Why didn’t I think of this? What if every car was identified by an animal? I bet Giraffe Man is a blast, the kind of party monster everyone waits for to really let loose. Giraffe Man cruising around on a Friday night pounding Red Bulls headed to your party. Giraffe Man parking his Volvo, slowly getting out of the car, toe tapping his giraffe plate before snorting coke in your bathroom. 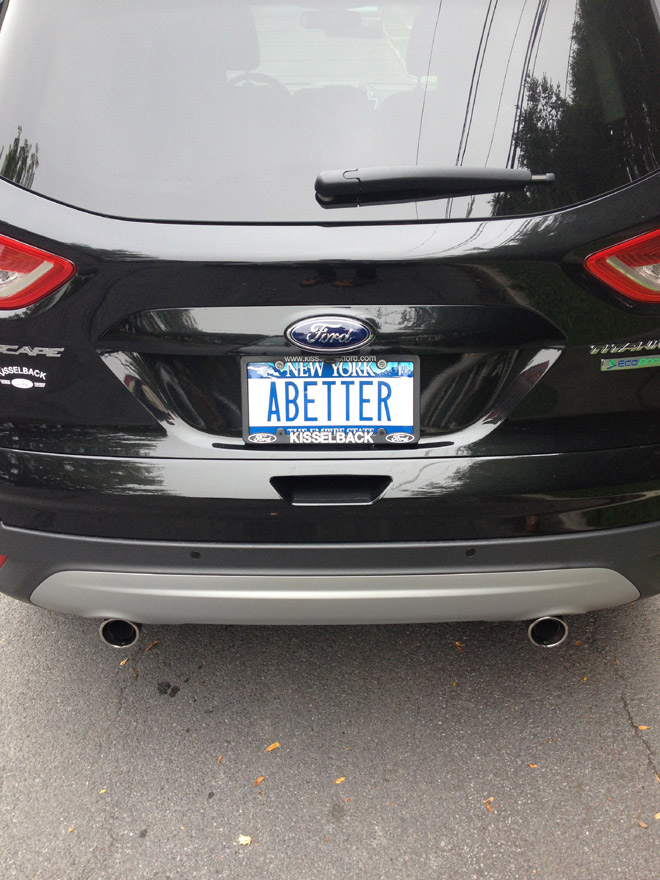 I lied in my introduction here, this guy I have seen. Several months ago, two blocks from my apartment, I ran a “strong yellow” and this guy, aggressively waiting to make a left at the intersection (it was the dreaded 5:20 pm and he just wanted to get home already), hit his horn and gave me the finger. I did a kind of “what’s the big deal” hand gesture in the rearview mirror that he may have interpreted as the “sorry, my bad” hand gesture, but things got awkward when I pulled over to park and he, four houses up, did the same. ABETTER had a limp, I think his right leg, and I imagine the plate refers to his recovery. He had the facial expression of a man familiar with hospitals. ABETTER, as in “I’m all better now.” He is typically parked in front of ALEX PL, who is my landlord (I’ve lied twice), and who is so fascinated by security (he has a little eyeball camera on his front door), I don’t dare reproduce his vehicles picture here. 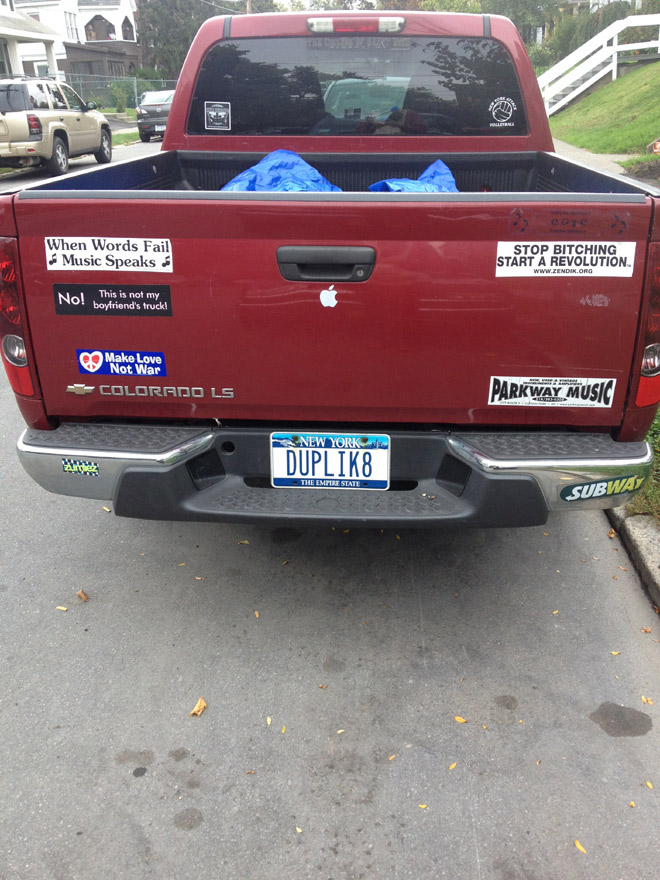 This is a rare case where my eye is more interested in something else (the SUBWAY sticker) than the actual plate. I pride myself on having an agile imagination, but I can’t, in any way, think why someone would put SUBWAY on their bumper (it also seems to directly oppose the political/fuck you mainstream stickers). Maybe DUPLIK8 is a proud, hard-ass shift manager, or maybe they met their significant other over a Sweet Onion Chicken Teriyaki. I really have no idea on this one. Jesus, I just noticed an Apple sticker. The more I look at DUPLIK8 the more confused I get and the deeper my conviction to never meet them grows. 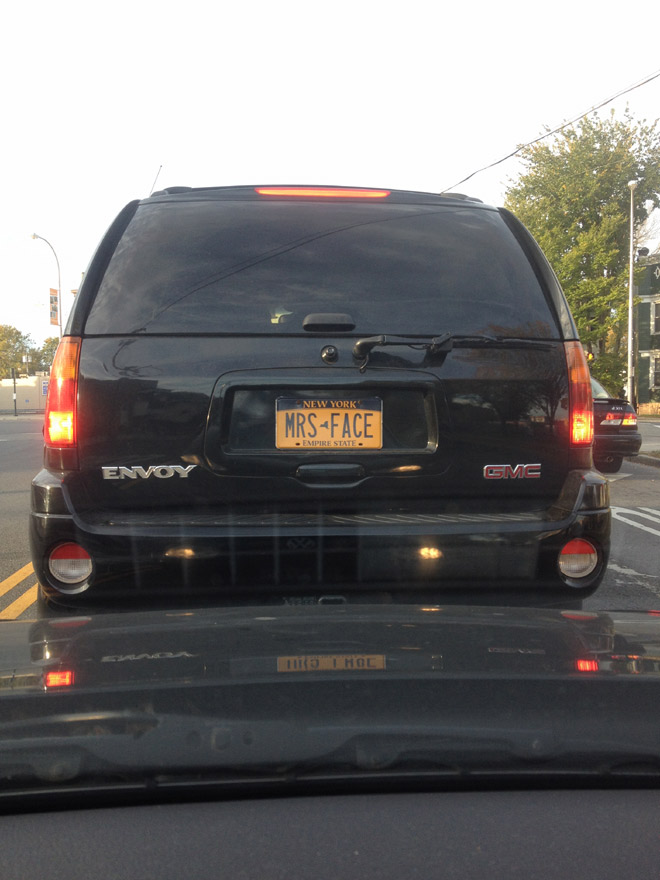 This is just a bonus to close this essay out. I took it driving yesterday. I wish MRS FACE lived near me. I imagine her front plate is a tiger eating a tiger.