A WORD FOR THE SUM OF DEAD: A REVIEW OF CHRISTOPHER LOGUE’S WAR MUSIC 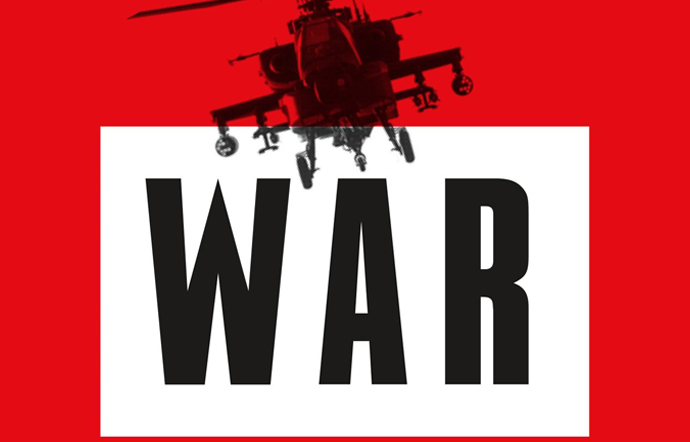 A standard Soldier’s Record and Pay-Book is divided into Part I and Part II and contains medical issues, records of leave, clothing sizes, inoculations, next of kin, name, rank, regiment, attestation date, and a brief self-description at the time of enlistment. To be kept on one’s person at all times, exempli gratia: Christopher Logue of the Black Watch, posted to the British Mandate of Palestine and court-martialed in 1946 for the “ignominy” of selling six pay-books to Zionist insurgents. Years later in the Paris Review, Logue dismissed this as an act of “spiteful masochism” on his own part. “You must remember,” he recalled, “that at this time British soldiers were being shot by Israeli terrorists who might have used paybooks to gain access to a camp.” But in 1946, here’s Logue and his pay-book in Acre Prison, the Crusader citadel built by Richard the Lionheart. It’s a year after World War Two, twenty-plus after the Somme, nearly a thousand after Lionheart’s landing, and three thousand since Troy, if there was a Troy.

If there is an organizing principle in War Music, Logue’s unfinished reimagining of The Iliad, it is the organizing principle of the Soldier’s Record and Pay-Book. There are few of Homer’s familiar epithets in War Music, no “Hector, Tamer of Horses” or “Rosy-fingered Dawn,” perhaps because the poem so readily assumes the pay-book’s rapid categorization of persons by name, rank, kin, and brief self-description. On the one hand, this is part of Logue’s principle of translation, eschewing Dryden’s sense of imitation as a Homeric “cover version” in favor of what Logue calls an “‘account,’ a word … chose[n] because it has a neutral, police-file air to it.” This “neutral” interchangeability of all things in War Music – the present and past, the Greeks and Trojans, men killing and killed – extends the exercise in political empathy that led to Logue’s 1946 imprisonment, one in which, he recalled, “I identified with those my side was against. I imagined myself as a Jew.” Paradoxically, though, War Music’s ability to switch sides indiscriminately, to translate between I and thou, also provides its genuine undercurrent of terror, suggesting that the very mechanisms of imaginative empathy that evoke compassion between antagonists are as likely to conclude in an ethos of universal arbitrariness, a game-whimsy that borders on “spiteful masochism.”

Not surprisingly, Logue is most comfortable with wide-angle lenses and god’s-eye views. He opens “Kings,” his “account” of Books I-II, not with Homer’s evocation of the muse, but with a cinematic directive to readers:

Picture the east Aegean sea by night,
And on a beach aslant its shimmering
Upwards of 50,000 men
Asleep like spoons beside their lethal Fleet.

Later, the debates between Agamemnon and Achilles count the spoons. Achilles, for example, identifies Briseis, pay-book-style, as the captive “whose dauntless husband plus some 60 / Handsome-bodied warriors I killed and burned / at Thebe-under-Ida as it burned.” She has no other value in the poem. Briseis: a word for a sum of dead, their mode of disposal, a geolocation. Here is another view, or the same, a shift in sympathetic rendering, in overhead perspective, in perspectival malice or ambivalence. It is hard to say, and that is the point:

The gentler, longer slope, that leads
Via its ridge onto the Trojan plain,
Is occupied by 50,000 Greeks
Silent behind their masks, yearning to fight

Hector emerges and commits the Ilian host
Their coffin-topped rhinoceros and oxhide shields
Packing the counterslope.

To put it another way, violence draws the real focus of the god’s eye, the grand shields and masks in thick numbers, the baubles, into clear relief. Political bloodshed as valorized materialism. To do this, War Music suggests, requires the constant, repetitious production and reproduction of a world of holocausts, of endless immolation, considered from the great height of King Agamemnon, whose discourse converges seamlessly with Achilles in the image of human life as:

Now, now, true, true. This is Logue’s characteristic turn, the sort of repetition that critic Christopher Ricks observed is both the most perfect instance of rhyme as well as its absence, evoking the burden of Eliot, Logue’s chosen ghost. Recall how, in The Wasteland, “a crowd flowed over London Bridge, so many / I had not thought death had undone so many.” There, too, the same repetition, the anti-rhyme enclosing the couplet and its crowd, borrowed from Dante just as Logue cribs his from Homer, in a pitiless vice-grip.

Thus the question posed in War Music is not what statement Logue’s “accounting,” both formal and philosophical, makes, but where one goes with it. The poem’s vista is the post-apocalypse. In this way, Logue places War Music center-stage among serious post-World War II responses to Modernism, concerned as he is with what remains “True. True.” in both an aesthetic and moral sense after great breakage. That is to say, he is hazarding the possibility of truth beyond enumerated facts, the pay-book forms of names, bodies, killings in great numeric amounts with “upwards of 50,000” as a mere starting ledger, and then the reduction withal to equally countless “Dead cells. Shredded. Gone.” Think, for context, of Theodor Adorno’s dictum that “to write poetry after Auschwitz is barbaric,” but also Adorno’s broader conclusion that “nothing less than all things are barbaric.”

There are, of course, other responses to War Music’s unyielding registry of bare life, as well as its Classicist “account” of modernity. Robert Fitzgerald’s Iliad, for example. Contemporaneous with Logue’s, the Fitzgerald translation shares much of War Music’s implicit engagement with bloody Modernism. As Fitzgerald recalled, for example, Ezra Pound pooh-poohed his early drafts with the words “too much iambic” scribbled on a postcard from the madhouse. It was only after discovering David Jones’ The Anathemata and In Parenthesis that Fitzgerald broke through, carrying Jones’ Modernist war poems in the back of his mind “as a kind of talisman.” Then there is Allen Tate’s “Aeneas at Washington,” a mini-compendium of concerns about the American project framed within The Iliad’s vision of doomed, cyclical history. To this list, add Tate’s sole consistent disciple, Geoffrey Hill, whose “September Song” insists on its parenthetical “lyric I” amidst the pay-book absolute of “so much Zyklon and leather, patented / terror” in which a birthdate and notated death are as close as Hill can bring the elegiac in answer to Logue’s “Truth / Truth,” “zero to zero.”

For our purposes, though, Hill’s a good azimuth, particularly his “Requiem for the Plantagenet Kings” and its abridgement and application of War Music’s leitmotifs to the Matter of Britain. Those other kings, petty hill-kings in their other pay-book day:

They lie; they lie, secure in the decay
Of blood, blood-marks, crowns hacked and coveted
Before the scouring fires of trial-day
Alight on men; before sleeked groin, gored head,
Budge through the clay and gravel, and the sea
Across daubed rock evacuates its dead.

For Hill, Logue’s cousin through Eliot, the “truth, truth” of “they lie; they lie” accomplishes exactly the opposite of repetition’s effect in War Music. It identifies a location in the midst of the generic, descriptive carnality where meaning is possible, albeit parenthetical: the double meaning of “lie,” the paradoxical conjuncture of the moral and corporeal. As much as in Homer, the inanimate sea acts on “men” in their political courses, just as the Judgement Day fires “scour” and “alight.” The agency of these elements is limited, though, fully subordinated to an already evident end. Everything is a process of harrowing in the transit to apocalypse. This, at least, is a potential outcome for Hill’s evacuated dead, cracked open along the semicolon where all the ambiguities of “lie” and “lie” and to what end ooze out.

In War Music, it’s otherwise. The repetition is a suture, underscoring the world’s whole, the poet’s totalizing vision. “Coffin-topped rhinoceros and oxhide shields” pack the counterslope, not men. The Fleet, itself, is “lethal,” not the 50,000 “asleep like spoons.” In fact, this is the poem’s central work of translation. It recurs to what Auden called one of essential questions of “critical discernment” in a poet, namely: “Do you like, and by like I mean really like, not approve of on principle: Long lists of proper names such as the Old Testament genealogies or the Catalogue of the ships in The Iliad?” All well and good, but “really like” the Catalogue, the ships, the 50,000-spoon cargo in what sense, to what end?

War Music revels in details because they are locations for reiterating the inhuman and inhumane. Because war, as soldiers know, is mostly the business of observing – and producing – tedious details in service of the annihilating indifference of power actual. And because everything, War Music suggests, is war. This totalizing impulse in Logue’s vision is what saves its presentism from kitsch. Logue freely updates Homeric similes: the red horizon hangs like slatted “venetian blinds,” hoplites sling Kalashnikovs, violence occurs in “fast-forward” or in Alaska. Most prominently, he titles his “accounting” of the epic’s first fights “All Day Permanent Red,” after a Revlon lipstick campaign – a slit throat, Logue reminds us, is “the width of a lipstick.” We are never cringing, though, at his anachronisms. Nor is there the datedness of much of Mary Jo Bang’s updated Inferno, the sense that, with each passing year, the transposition of a twenty-first century poet’s ideologies into thirteenth-century cosmologies, the substitution of Muammar Gaddafi for whoever in Hell, will finally fall a little flat. This is because Logue’s epic translation ultimately insists that there is little to separate one iteration of hell-on-earth for another.

War Music’s bloodshed can be organized, described, but it never needs to be translated or “updated” in the truest sense. In the end, this is because Logue’s revision is a dramatization of Simone Weil’s famous argument about Homer’s source. It translates her mistranslations more than it does The Iliad, itself. In so doing, though, War Music articulates the impasse of modernity more than any other recent version, namely that (in Weil’s words): “The true hero, the true subject, the center of the Iliad is force. Force employed by man, force that enslaves man, force before which man’s flesh shrinks away.” Force, Weil continues, meaning the organizing principle of armies and borders and pay-books, “that x that turns anybody who is subjected to it into a thing.”

In the end, the great antagonism in Logue’s translation is not between Greeks and Trojans, bold Achilles and noble Hector. It is between force and the parenthetical – Jones’ sense in which war and killing in war are parenthetically set off from a commonweal, anathematized; Hill’s sense in which the ambiguities of historical lives or the stubborn empathies of lyric selfhood are parenthesized against the onslaught of natural and manmade oblivions. Perhaps this is because death matters in their verse. In War Music, however, what Weil calls “the force that kills” is of far less concern to Logue – and to us in our era of political paranoias and surveillance – than “the force that does not kill, i.e. does not kill just yet. It will surely kill, it will possibly kill, or perhaps it merely hangs, poised and ready over the creature it can kill, at any moment, which is to say every moment.” Which is to say with Logue:

As the ax swings up, and stays,
Stays poised, still poised, and –
As it comes down:

Covers the terrible thock that parts the bull from its voice
As the knife goes in, goes down,
And the dewlap parts like glue
And the great thing kneels
And the breath hoses out
And the authorized butchers grope for its heart

Which is to say, the pay-book angle on livestock, bodies, victims, a butcher-shop play-book, and in the sop, the loudest parenthetical supplication to a god, the pleas – PLEASE GOD! PLEASE GOD! – between which there is nothing but gap, the oblivion of Eliot’s “so many,” Dante’s damned. Which is to say, War Music. Which is to say, a continuous present where the future is all day, permanent red.