When I realized I had to do some promotion for my book, Caca Dolce: Essays from a Lowbrow Life (Soft Skull), my first thought was that maybe I could use this as an opportunity to confront Scott McClanahan about a few things. I had a few things on my mind and Scott seemed like a fun target. Well, lo and behold, Scott had a few things on his mind as well!

What follows is our conversation, held over the course of like ten weeks, because we both suck at email. Scott has a new book out as well: The Sarah Book (Tyrant Books). I read it like two years ago because we tight, and it’s the best thing ever. I don’t respect anyone who hasn’t read it. 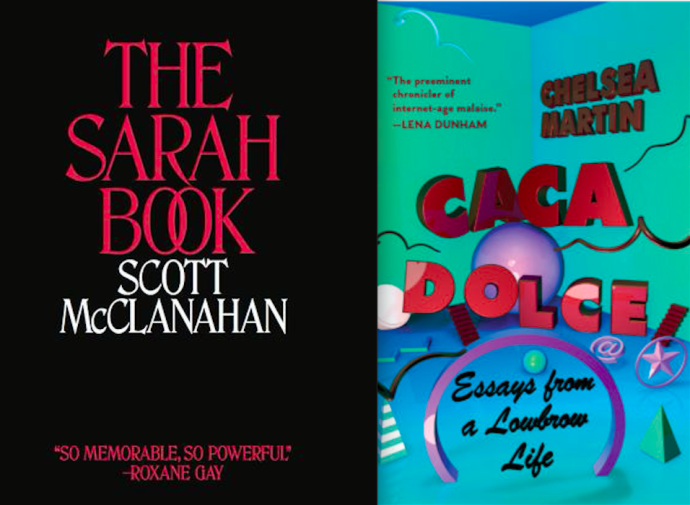 CHELSEA MARTIN: A while ago your wife, Juliet Escoria, tweeted, “Scott won’t stop screaming about his unfounded belief that there’s no poor people in the state of California” and then “IF YOU’RE POOR IN CALIFORNIA YOU REALLY FUCKED UP” She later tweeted that this rant started because Juliet told you the town in California I grew up in is slightly poorer, according to census info, than the town in West Virginia that you grew up in. So my question is this: Do you see West Virginian poverty as somehow more authentic or pure than Californian poverty?

SCOTT MCCLANAHAN: I was just joking, but sweeping generalizations are fun sometimes. Just beware of a spouse who has a twitter account. I talked shit about the Smiths a few years ago and she did the same thing. Juliet gets a real kick “outing” the stupid crap I say on twitter. But as far as being poor goes: There are bad poor people and there are bad rich people.  There are good poor people and there are good rich people. Whether it’s West Virginia or California.

I’m glad you’ve taken offense at the poverty thing though. From now on when people write about your writing they can talk about your funny accent, use the phrase “backwoods” a bunch, insert the word “hillbilly” in the headlines of articles about your book, make analogies to Trump because of your geographic location. Congratulations, Chelsea. You are no longer the hip, hyper modern writer who Lena Dunham says “continues to prove herself the preeminent chronicler of Internet age malaise.” You are now a regional writer. Welcome to the regional writer club.

CM: Well, yeah, Scott, you talk funny. And it’s not as if you destroy boomboxes during readings as a way to break regional stereotypes and conform to the literary establishment. You work the hillbilly angle every chance you get. I just heard you on Otherppl telling Brad Listi, “human mutilation is kind of our state motto in some ways.” Don’t you think that the “backwoods” identity has helped your career?

SM: Oh yeah. I think I’ve played it up for sure, and maybe without even thinking about it. It’s just one of our oldest myths. The kind of holy primitive thing and the authenticity thing. I guess all of our lit/art movements touch on this somehow. The Beats, and the English romantic poets, punk, hip hop, etc. etc. The whole “authenticity” bullshit. It was just an easy way to differentiate myself from the thousands upon thousands of boring writers. Of course, I’m probably just as boring as the rest of them.

But I guess I’ve made my trap so I’ll just have to deal with it. There are worse things. I could always start complaining about politics.

When I first met you, I thought the whole Chelsea Martin thing was probably a little bit of an act. She can’t really be this weird type of stuff. But within the first few days of hanging out I observed you walking straight into one of the wires that anchor a telephone pole. It was one of the most awkward things I’ve ever witnessed from another human being. You also asked me to look at your eye because you thought you had a stye. You weren’t joking. You were serious about having a stye on your eye. I realized around that time that it wasn’t an act.

I also failed to participate in the Lil Bitch video you and Elizabeth did where you talked shit about our fellow internet indie writers. Are you really that petty or is it just a self protective mechanism for the sensitive genius I know who walks into telephone poles and worries about having a stye on her eye lid?

CM: I don’t think the Lil Bitch video was petty because I didn’t feel negatively about anyone we called out. I think mostly we just thought it was fun. I do think it’s fun to fuck with people and see what happens. You have to admit – it’s just plain fun! But as I’ve matured, I’ve realized that people aren’t always up for that or they could be having a hard day or whatever and it’s not worth it to call them out on something that doesn’t matter for your own creepy amusement. I think I inherited some sociopathic tendencies from my father’s side of the family and I’m working hard to tamp that down.

We both have books out this year about our lives. I know yours is a novel, Scott, but let’s be real. Sarah is a real person. Don’t take this the wrong way, but do you think publishing a book about your ex-wife is evil? Like, what did she do to deserve this one-sided version of her failed marriage to be publicized, other than participate in a doomed relationship? I want you to say that it’s not evil, that you’re entitled to make art about your experiences and to be evil requires malice, because that would let me off the hook a little bit for my own one-sided version of history I’m currently promoting. But a big part of me thinks that’s a bunch of bullshit. These are real people and now they have to live in a world where strangers think things about them and they can’t really defend themselves.

Have you ever been written about? One time Elizabeth Ellen wrote about me in a poem and she misquoted something I said about Third Eye Blind and I was absolutely mortified. So I really can’t imagine how bad it must feel for someone to read something written about them that’s actually serious or whatever.

SM: Do you know that Czelaw Milosz quote? “When a writer is born into a family then that family is done.” I guess there’s a certain amount of truth in that. “Evil?” though? Maybe. I guess all the things that I love in my life have demons in them. I don’t know why people are so concerned with that stuff. I only like art or writing that makes me think, “Wow, this is kinda fucked up. This feels kinda evil and also angelic.” But at the same time all of the things I love in my life are that way. Juliet is part devil and part angel. My kids are the same. That’s why I love them.

And perhaps this is our answer for the millions of shit books published each year. If you’re not asking the question, “Could this possibly destroy my life?” then you shouldn’t write it. That’s what I think anyway. I think being a good writer and being a good person are two different things. Most writers I know are wanting you to know what good people they are and I have absolutely no use for this. It’s like someone saying “trust me.” That’s the person and writer you want to worry about. They’re both liars. But then again I wrote a fiction. So I’m a liar too.

CM: I care a lot. I care about hurting people I love. My little brother and sister, for example. I talk a lot of shit about their dad in Caca Dolce, and maybe what I wrote will make them feel sad, or think it reflects on them, or feel disrespected. And given that their dad is so shitty and the rest of our family is pretty shitty too, I know perfectly well that they don’t have a lot of people in their lives who care about how they feel or want to protect them, and maybe I am setting myself up to be yet another person who selfishly hurts them. I care about this so much. But not enough, apparently, to not write or publish it. So that’s where ‘evil’ comes in, for me, maybe. I mean, it’s a question.

I agree with you that immoral art is the best art. I want to see art about the complicated and terrifying inner workings of human nature only, everything else is boring. And I distrust anyone, artist or not, who believes themselves to be “good.” I guess what’s different about writing/publishing nonfiction is that expressing dark thoughts that involve other people almost feels like calling them up out of nowhere and telling them what you don’t like about them. Like, wow, how rude. And they don’t even get the privilege of hearing how nervous you sound while shittalking cos your shittalk is typed up and formatted into a pretty little book with endorsements from Lena Dunham all over it.

SM: I agree with you totally. This is something I deal with as well. Not wanting to hurt people. Truly. Especially in the case of what I do where I take real people (sometimes) and often time make up a fiction around them (or not). I have panic attacks over it at times. I also teach in conservative WV and deal with bad thoughts about how this will affect my job. Add your children’s health insurance (which is provided by that job) to the mix and it makes it even more complicated.  However, I think it’s one of those things where it must not matter to us or we wouldn’t do it. We don’t want to hurt anyone, but if we really cared then why are we doing it? We could stop.

At the same time I can’t see where anyone could misconstrue what you do in Caca Dolce as evil. That sounds insane to me. It’s anything but. I found each and every person you write about in this book as people you love and care about. Deeply. The person I most related to besides the narrator was your father and step-father. I kept thinking what if I was in this situation? What if certain things in my life turned out differently? How would I be? What would be like to raise a daughter who was ten times smarter than me when she ten? Life is an impossible situation and folks are just doing the best they can. You show us this in your book. Anyone with any sense can see this. In terms of your siblings—I would have died to have such an amazing artist as a sister. I’m sure they will see this too. If not now, then someday.

CM: You drink a lot of energy drinks, right? What’s your favorite?

CM: Great. Anything else you wanna talk about?

SM: Yeah. When we first started to do this interview we agreed that we should try to get in a fight during the interview? How did we do?

CM: I feel like every time I tried to provoke you, you’d just agree with what I said. And I think I did the same thing.