Why I Named All My Standard Poodles “Fuck” 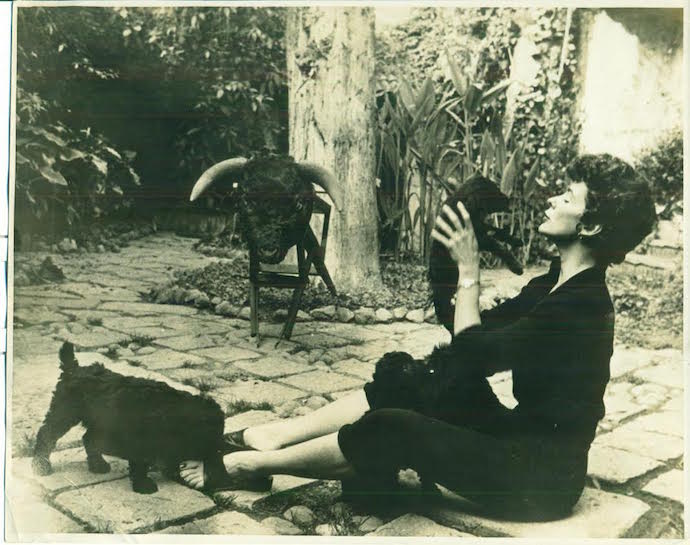 The first time I met Bette Ford I was greeted at the gate by a friendly dark gray Standard Poodle. I have my own dog (small, rescue) whom from time to time I drop off for a bath. I know the scent of bath and I wondered, as I said hello to Bette Ford’s Standard Poodle, Did the poodle get a bath just for me? Then as I drew in a full breath of the scent I said to myself, I am out of my league. Bette Ford soon put me at ease, though not entirely at ease, because Bette Ford is a whirlwind of charm and intelligence and cleverness and intimidating force, emphasis on force. But we do have a shared background of sorts, in that as a child I attended bullfights at the Plaza Mexico, in Mexico City, and as a young woman Bette Ford killed bulls in the Plaza Mexico. Bette Ford in fact was the first American woman ever to kill a bull in the Plaza Mexico. One afternoon I sat down with her to discuss the ethics of killing bulls and we ended up talking instead about why she decided to give the name Fuck to all her Standard Poodles.

Let’s start with the numbers. You’ve had, what, four or five Standard Poodles?

And you’ve named them all with the French word that in polite conversation means “to kiss” but in slang means “to fuck”?

Can we just say Fuck for short?

These are big, strapping dogs, and from what I understand quite fierce.

Oh yes. They’re hunters and very protective. Protective of me. They would go for your throat if you made a wrong move.

Has anyone ever made a wrong move?

Scott [Bette Ford’s husband] does from time to time. Our current Standard Poodle is not named Baiser, by the way. She is extremely protective. Lovable but protective. Sometimes she’ll go into attack mode when she senses that Scott is feeling affectionate.

All your Standard Poodles have been girls.

Tell me about your first.

I was living in New York, modeling and acting, and I met some dancers on a show I was doing, a television show, a troupe of dancers. They traveled around the world and somehow they had a Standard Poodle that traveled with them, but they were tired of dragging it around. So they offered it to me.

And you changed its name.

I don’t remember what they called it, but I didn’t like the name. I consulted a book about naming dogs—someone gave me a book which said that if your dog is a certain breed, and born in a certain month, its name should begin with a certain letter. So then I knew that I wanted a name that began with “B,” and I wanted a French name, because of course poodles are a French breed. I didn’t really know any French at the time but somehow I’d heard the word “baiser,” probably when I was modeling.

How did you come to learn that it didn’t only mean “to kiss”?

I was seeing a man who was a pilot, a commercial airline pilot, and he knew French.

And you didn’t consider changing the name then?

At first, no. I left her with a couple I knew. The understanding was that they would take care of her, and after I was settled in New York I’d come back for her. But when I did come back after a few months, they wouldn’t give her up. Either they’d misunderstood or fell in love with her and pretended to misunderstand. In any case it got…unpleasant…and basically I had to pry her out of their hands.

Was the name a problem in Mexico? I know you had a manager whose name was Don Juan and who guarded your public image. Did Don Juan ever try to persuade you to change the name?

Well, the poodle didn’t actually get much publicity. She mostly stayed at home with the maid. Eventually I bred her and I gave one of the puppies to Don Juan. He named the puppy Mimi.

And Feather. Feather is my stepdaughter who became a Buddhist nun. Her name is now Wongmo. 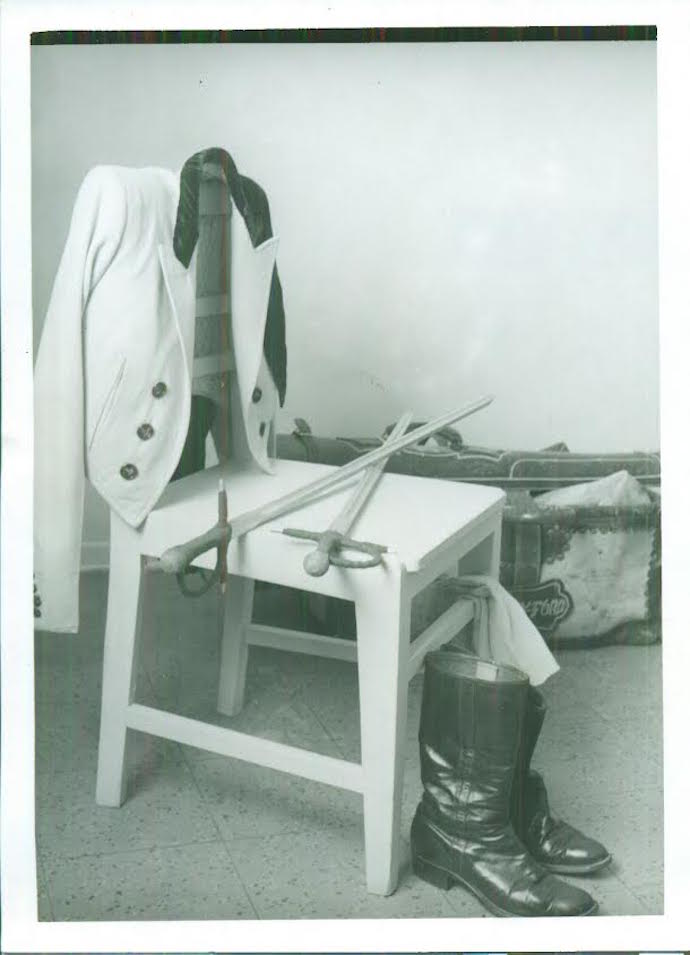 Did Baiser ever meet Norman Mailer? I remember you told me about getting into a fight with Norman Mailer. Did Baiser jump in and come to your defense?

It wasn’t actually a fight. I knew Norman Mailer from New York, and when he stayed one summer in Mexico City we would socialize with him and his wife Adele. By “we” I mean me and Lewis Allen, a Broadway producer who lived with me in Mexico. One night Norman made a disparaging remark about my education—my lack of education, I didn’t go to college—and I responded impulsively, I took a swing at him, a kind of openhanded swing, knocked him off the footstool where he was sitting and drinking. But no, Baiser didn’t jump in. I kept Baiser downstairs in the garage when we were socializing.

Was that first Baiser as protective as your current Baiser?

She was a brave dog. And a strong dog. I was training six hours a day and on a special diet, a strength and stamina diet, because as you know Mexico City is a tough place to train—it’s more than 2,000 feet higher than Denver, almost a half mile higher up. So I was on a diet that I’d learned from a boxer—my manager, Don Juan, used to manage boxers. I would buy expensive cuts of beef and slow-cook them in a double boiler to extract the juices, the blood and all the nutrient-rich liquid content. I drank the juices and then I’d cut up the beef for Baiser. So she had one half of a boxer’s diet, basically. She was powerful. I came back from training one afternoon and the maid was outside and told me that Baiser had subdued a burglar—a guy had broken into my house in the middle of the day. And I thought, uh-oh, “subdued”? But she’d just backed him into a corner and was holding him there until I came home.

So she was a fighter, from being on that boxer’s diet.

She was your basic fierce Standard Poodle. She did develop an appetite for beef, however. For cow flesh. You of course know that, as a bullfighter, when you do well in the ring, the judges award you the bull’s ears, one ear, two ears, ears and tail, depending on how impressively you’ve performed. The ears are mounted on plaques along with the names of the bulls they were cut from, the dates, etc. I kept the plaques downstairs in the garage…well, you can see where this is headed.

And you kept Baiser with you all the time you were in Mexico, through your entire bullfight career?

Yes. And then when I left bullfighting, I brought Baiser back with me to the States. I was 23 years old[1] and I’d just married John [John Meston, the writer who co-created the TV series Gunsmoke] and decided to go back to acting. Baiser lived with us in our house in Tarzana. When Baiser died, we buried her in the rose garden. I told John that when I died, I wanted to be buried in the rose garden next to Baiser.

That would make for an interesting gravestone. But I guess it won’t happen as you’re not living in Tarzana and you’re still going strong.

So then after being married to John, you led a wild life for some years, went to New York, eventually met your present husband Scott, returned to L.A. and did film and television acting, and at some point acquired the Baiser I met. I think that’s it in a nutshell. And in between there were two Baisers? One Baiser?

I don’t remember that detail very well…let me think about it…it was a long time ago…a lot was going on…somewhere along the line I believe there was another Baiser, or two Baisers, two more Standard Poodles named Baiser, but I can’t place exactly where or when.

Is it possible you buried two Baisers in the rose garden?

No, I would definitely remember that.

Okay, let’s move forward to the Baiser I met. How did she come about?

When we first moved here [Toluca Lake, a neighborhood in northern L.A.], we had two Dobermans, very protective dogs, but also lovable. The first one died and we began to have problems with the second one—he was actually quite vicious, lovable but unpredictable around strangers, quick and mean. He would strike like a snake. He met his end when a gardener accidentally poisoned him by putting out the wrong weedkiller. But probably it was for the best as the Doberman really could not be trusted.

And then by chance we had an opportunity to adopt a rescue, another black Standard Poodle, which as you know I named Baiser.

So now you’re in upscale, refined Toluca Lake, and no qualms about introducing your refined neighbors to a dog whose name in French slang means Fuck?

Well, at the time our next-door neighbors actually did happen to be French. I’d go out into the yard looking for Baiser and call out her name, “Baiser! Baiser!” and the French neighbors were just on the other side of the fence. Scott and I used to giggle about it.

She was a sweet dog.

She lived for thirteen years and when she developed cancer, I brought a man to the house, a beautiful man, to euthanize her. An incredibly sensitive and gentle and empathic and beautiful man who among other things goes to houses and euthanizes dogs at home. She was in my arms when she took her last breath, one of the saddest experiences in my life.

And then you decided to get another black Standard Poodle.

People do often tend to stay with one breed. I wonder if anyone has ever looked into that. You like to look into everything, Fortunato, why don’t you look into it?

No one has ever told me that Gypsy means anything other than Gypsy. As for breaking the tradition, Scott and I had a long discussion about names and karma and eventually we decided that we wanted to move on. I wanted this dog to start with a clean slate.

[1] Bette Ford later elaborated on this point: “All bullfighters are 23 years old.”