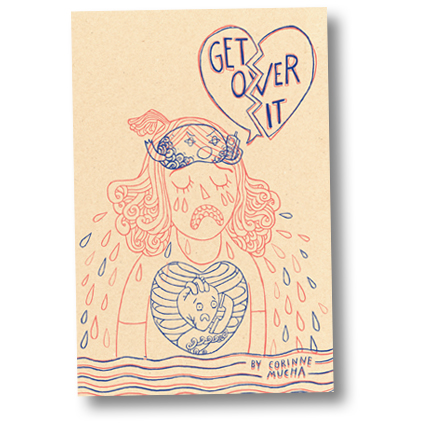 I first met Chicago comic artist Corinne Mucha at a lit fest downtown in the city. Stumbling on this booth piled with comics so honestly made they bordered on zines, I was instantly drawn in. Mucha’s comics showed the graphic girls I craved – real bodies with half-scribbled shapes, Daniel-Clowes like attention to pimples, and no overstuffed, overflowing bosoms in sight. Since that fest, I’ve been stocking up on every one of Mucha’s books/ comics / pamphlets I can find, including Freshman (published from Zest Books), the story of two girls and their prospective boy toys first year of high school; “The Girl Who Was Mostly Attracted to Ghosts,” a tale of a girl who couldn’t stop falling for completely unavailable guys; and “Is It the Future Yet?,” a comic created exclusively for Chicago’s Quimby’s Bookstore about the author’s early ways of dealing with anxiety.

I got the chance to talk to Mucha about comic making, making a career from illustrations and carving out time to read: 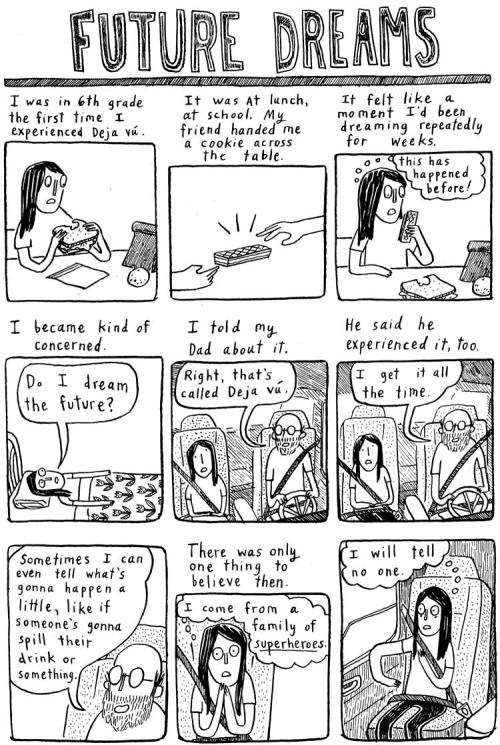 How did you get started making comics?

For college, I went to RISD (Rhode Island School of Design) with the intention of studying illustration, working towards writing and illustrating children’s books. Then, my junior year, I had the opportunity to spend two semesters doing independent study in Rome. During this time, I started keeping notebooks full of words and pictures as a way of recording what happened that day. Some of my fellow students pointed out to me that these doodles were actually comics. I loved having this tool to record whatever dumb things popped into my head. I think that’s initially what got me hooked- being able to tell a story about virtually anything. It was also convenient, because around this time I realized I didn’t really have any ideas for children’s books. I returned to Providence for my senior year, and was able to take a comics class with the inimitable David Mazzuchelli. I’ve been making comics pretty consistently since then.

What were some of the first comics you started reading?

As a kid, I read a lot of Betty and Veronica and Calvin and Hobbes, but as an adult, even after I started making comics, I’ll admit, I was a pretty reluctant comics reader. I’d been making comics regularly for at least a year before I really started reading graphic novels of any kind. I had a boyfriend at the time who would constantly throw books my way, saying, “If you want to be a cartoonist, you should really read comics.” Tom Hart and Jeffrey Brown were two cartoonists whose work I initially really liked. And Roz Chast and Lynda Barry.

Who are other comic/graphic novelists you are reading now?

How to Be Happy– Eleanor Davis

The Nao of Brown– Glyn Dillon

This One Summer– Jillian Tamaki

Can’t We Talk About Something More Pleasant?- Roz Chast

I’ll admit that I tend to read more books by female cartoonists than male artists. It’s not exactly intentional, but my bookshelf is definitely dominated by books written by women. 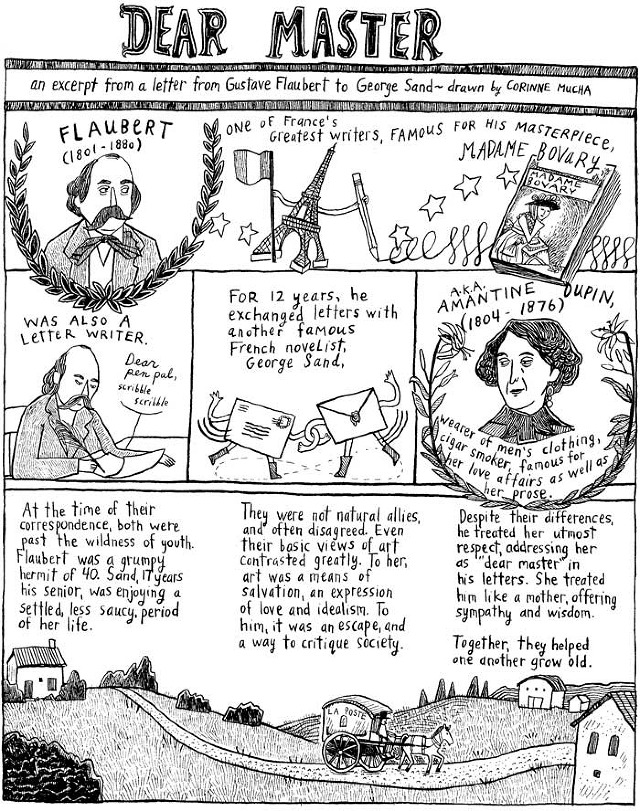 Do you have a specific audience in mind when you write?

I don’t think I necessarily have an audience in mind for my stories, at least not when I’m starting out on something. Usually there’s some kind of idea I want to tease out in some way, either through some mode of personal storytelling, or fiction, and once the idea is down on paper, I think about what the right destination should be. Do I just put it on the internet? Self publish it in booklet form? Pitch it to someone else to publish?  I think that these stories will naturally have a different audience, depending on which form they take.

With the exception of probably my mom. My mom is my most consistent audience. She reads everything. 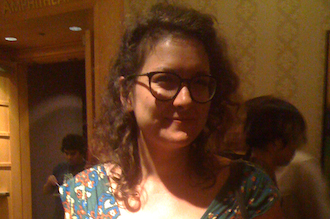 Many of your stories/strips are about a fear-slash-desire to know the future. Is this a big theme in your personal life? As you’ve gotten older, have you found the future less scary?

A lot of my work explores my relationship with anxiety, which has been a running theme in my life. It’s an easy subject, partially because I have a wealth of material to work with at this point. For example, most of the work I’ve done about my childhood is about the weird stories I made up–being reincarnated, having witches living in my closet–as a way to make sense of the anxieties I was having then. As an adult, I still have a lot of anxiety, though perhaps it tends to take on a less whimsical form. I think that the future is by far the easiest thing to worry about, and so that’s probably why a lot of my work touches on that topic. I’ve tried to work a lot on becoming more comfortable with uncertainty, but it’s an ongoing practice (for everyone, I think.)

As a woman (and maybe even further, as an attractive woman), have you ever felt like an outsider in the comic-community?

Is there any money in the comics you’re creating?

Only a small portion of my income actually comes from comics themselves, but basically everything I do for a living at this point has grown from my practice as a comics maker.  I work primarily as a teaching artist in Chicago, teaching comics classes for kids, and leading school programs dealing with topics in contemporary art. I also work as an illustrator, and a high percentage of my illustration work is comics related.

It took a long time to build up enough work for this to be my job, though, and I think my interest in storytelling has always been the thing that kept me motivated to keep making work. Sometimes there are stories that come into your life that just feel like they need a home on paper, and I’ve always really enjoyed that process. 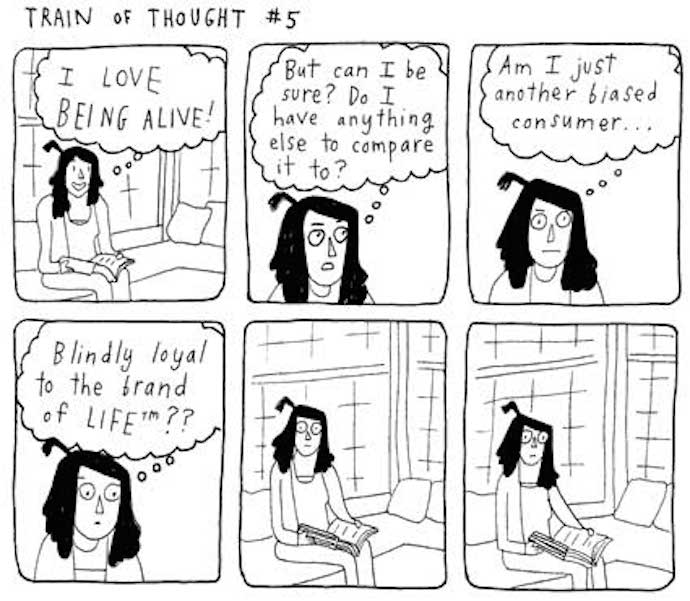 I just moved, so I feel like I’m hyper aware of everything that’s on my bookshelves. I tend to get rid of most non-comics books I might acquire, because I’m unlikely to reread them, so it’s mostly just shelves and shelves of graphic novels and mini comics. (As well as a healthy collection of self-help books.)

I’ve got a copy of Mary Alice, Operator Number 9 from when I was a kid, so probably the oldest book on my shelf. James Marshall was one of the illustrators who made me want to write and draw books as a kid, and it’s nice to have something like that around as a reminder.

In the to be read pile: my copy of Building Stories by Chris Ware. I think I’ve been holding out for some imaginary, perfect, uninterrupted afternoon to cozy up with that pile of comics.  It hasn’t happened yet. I guess that’s what the future is for.