We Cannot All Be Rocks In Heaven: Brandon Shimoda’s Portuguese 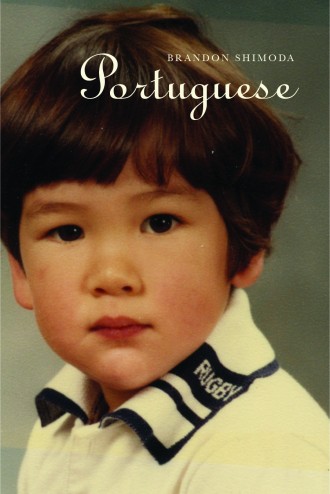 What might a book that purports to be “unafraid and triumphant” look like, how might it read? The editors of Octopus and Tin House describe Brandon Shimoda’s book this way, and there are a plethora of blurbs in the book’s two covers. My favorite is this one, by the poet Brenda Ijima: “Brandon Shimoda has she-she’d a crèche of earthly delights vastly libidinal: ravishing, ceremonial word formations, not withstanding the presence of wrath like a raw cake, sponging.” This much, I fear (or, in alternate moods, hope) is true of the book itself.

Another blurb, this time from the poet Nathaniel Tarn: “UNITED SHIMODA IS UNITING THE WORLD.” Again, largely true, if a bit exaggerated.

To speak of Portuguese at all is to begin to frame it, somehow, within its own landscape, which is nearly impossible to do and make writing about the book a difficult task, at least for me. What can, or ought, I say?

This book is sprawling, and indeed, it is “united” in the sense that there’s no proper divided subject here to reckon with. When I went through Portuguese at first, I underlined phrases, with the notes: “comment on this.” So I’ll try to present as best I can these verses that I’ve marked, in the sense that to criticize would be too daunting for me, but to look at the way the book is structured and what it means to the reader might be partly manageable.

Portuguese is not set up in any sectioned form, and yet there are themes that resonate. “For the People” continues to reoccur, and this is where the book is, I suppose, as Tarn writes, “UNITED.” One gets the sense that this book wants, very much, to write what I call “the whole poem,” that it is unabashed, and that its desire to move forward and address as many different readers as possible within a relatively short frame is one of the things that makes reading this book breathless. It sprawls, and it moves rather quickly.

In “The Grave on the Wall,” Shimoda writes: “I am unable to interest myself in the beauty / Of a place if there are no people in it.” The remainder of the book’s poems are just so situated, in the sense that they are peopled by various characters, and they express (truly) this Whitmanic generosity that propels Shimoda’s poems. There are also, though, moments of personal “expression,” as if the writer is taking on characters, though it’s unclear if Shimoda is writing about himself or someone else (I choose to believe that he means to be true). Here is an example:

When I speak of characterization, I mean that the book is a “full” book, that there is a lot going on, and that it is almost impossible to speak of it in any really organized way. I think (at least, I merely suspect) that this is what Shimoda intended, and this is why the book is “UNITING THE WORLD.” He writes: “Coming true, I can barely contain / What lives as mine / To walk away with nothing but more ideas.” He also writes: “Sentiments of caution / And mystery / In the presence of the manifestations of the strange / And of the marvelous.”

This book is, indeed, both strange and marvelous. It seems to me that it wants to be poetry, that it wants to live up to the moniker of poetry, even (and albeit) a bit of an epic. According to Shimoda,

The reader feels this as he or she reads; it’s invigorating; it’s Dickinsonian in its desire to sweep away the reader into a place where the world (though present) has oddly disappeared. It’s a young book, and there’s a lot of virility in its youth (she-she, indeed). But there’s also, beneath the surfaces, a knowingness that lets us in on the truth that Shimoda is playing with language here in order to achieve something in the reader, that he knows what is going on. (But enough of the intentional fallacy.) He writes: “For there is ISLAND in the youth / Not a straight coast. Youth is thousands of miles of inlets.”

My favorite parts of Portuguese are its pockets of failure. It’s a ride, a trip, true, but there are times when one senses the speakers’ winding-down into something different, as, for instance: “I would have carried out the mission myself / But had no mother to name the mission after.” Shimoda is able to make sense of the characters he chooses, and their twists and turns, and the words he chooses to write, make the book a mirror for poetry itself. Here is an example: “One can taste the radiation / As newly crowned agents of prayer / Soaring all the way to the afterlife there.”

The book’s capstone thesis, if you will, might be found in the following lines, from “Scarlet Begonias”:

Here we have, in truth, “pure” (or should I say “impure?”) poetry, a sense of what it might mean to write a book that is, indeed, young oil, which stays young, hardly ever bearing the marks of age. This is what this book mirrors for us—this intensity and heat of day that may soon fade.

This mirror has various effects, and one of them is to cause reflection in the reader, to make the reader want to know what, indeed, “poetry” is, and how it manages to live in the daily world. It’s a trip; it’s a long ride, indeed. If, as Shimoda writes, “we cannot all be rocks in heaven,” then this book shows us what a rock in heaven might look like, and there’s something nice about leaving the book behind to reflect on what the possibilities of an earthly life might look like.

Portuguese is available from Octopus or Tin House.