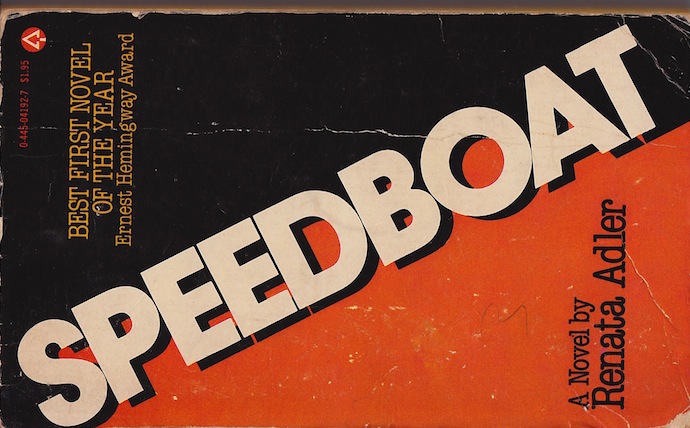 The talent for objectively describing someone else’s fallacy is perhaps the most fearsome a writer may possess. Such a talent constitutes a fair part of Renata Adler’s reputation, especially in her nonfiction. Her authority derives from the imperious pace of her prose, and the swiftness of her judgment––her sentences hum along to a conclusion before you’ve managed even to form an opinion. Of the many corkers she unwinds in Speedboat, her first novel, from 1976, which has just been reissued by NYRB along with its 1983 followup Pitch Dark, there is the following précis of academic politics, which become laughable and suspect through nothing more than a perfectly fair account of action and motivation. Yes, it’s a long quote, but it will explain better than I ever could the fierce allegiance Renata Adler inspires among her readers:

Our branch of the university is accustomed anyway to jurisdictional disputes. Drama and Cinema grew out of a workshop that existed many years ago to remedy the accents of bright city girls, who could not afford college out of town. When such programs became unfashionable, the staff chose to become two faculties: Dramatistics, and Perspectives in Media. Within a year, the Media people chose to join the newer Department of Minority Groups and Social Change––which already offered History of Broadcasting 204, 301, and Seminar and whose course on Prostitution, Causes and Origins, was being televised. The Dramatistics people felt they could not attract students, or budget allocations, on their own. They added Film. Our department changed its name, and became what it now is. Our Drama people are trying to take over the English Department’s course Creative Writing 101; Playwriting A. The English Literature people are beleaguered on another side. For twenty years, they have had The Brothers Karamazov (translated, abridged). The Department of Russian Literature, which teaches all its courses in translation now, wants Dostoevski back…. The operative principle appears to be that if any thing or person mentioned in another department could conceivably be mentioned in your own, you have at least an argument to seize the course. One night when the Women’s Studies Division gets under way, we all expect there’s going to be a coup.

You will of course agree––how could you not?––that this is profoundly foolish. But what is less evident––and this is one of the objections that has trailed Adler throughout her brilliant, maddening, controversial, sporadic, cult-beloved career––is what, in this case, would be less profoundly foolish, aside of course from Renata Adler’s own impeccable lucidity.

A clue, really a very heavy clue, to the answer to that particular problem comes from the title of Adler’s first collection of journalism, Toward a Radical Middle, which suggests a sentiment also articulated in Speedboat: “The radical intelligence in the moderate position is the only place where the center holds. Or so it seems.”

And that “so it seems” is key––that slight wavering of an equilibrium attained only through a rapprochement with doubt. Speedboat has not a whiff of plot. Rather, it’s a novel about the intense mental effort involved in being Renata Adler. The structure of the slender Speedboat and Pitch Dark, but especially Speedboat, the chapters of which appeared as standalone short stories throughout the early 70s, is a kind of mental triangulation. A typical two-page spread will contain street chatter overheard from a window, a memory inspired by a possibly unrelated reflection, and two zeitgeist anecdotes, one left dangling, quivering with implication, and one taking a sudden U-Turn into aphorism. “’How I envy you,’ the minister’s wife was saying to a courteous, bearded boy, ‘reading The Magic Mountain for the first time.’” Or else: “The clerk, becoming pale with rage, said he might have to raise the matter with management. People seem to be unhappy in so many different ways.”

The reader in the habit of copying down quotable, self-contained words of wisdom out of books is advised: these kinds of lines are practically all Adler writes. The logic is internal, the references insider, and the humor all the more definitive for it. Adler doesn’t show her work, and it’s out of her elisions that the tension emerges. Adler’s narrator, who is named Jen Fain, but only incidentally, is forever in medias res, dropping in and out of time and place, of personal and professional relationships. Men known by their first names appear suddenly, recur periodically, and then seem to have vanished. There are so many people to know, and so much thinking to do: about lynchings in the South, unrest in the Middle East, and prowlers in the neighborhood; about inexplicable childhood friends, collapsing marriages, and cocktail party gossip that can’t be tuned out. “And then I would say, and then I would say, Let’s just have it a little quiet around here.” (The novels are feminist, in Adler’s conviction that spilling out the contents of her brain does not disqualify her claims to objectivity.)

Speedboat may be titled after Adler’s mind, or milieu, to the extent that they’re even separable. The novel is redolent of fashionable swiftness: radical politics and bourgeois dinner parties; townhouses, country homes, island villas, sleeping pills. Adler evokes an oft-romanticized intellectual Manhattan-as-center-of-the-universe, where everybody’s published and in analysis, the product of a weird provincial childhood that nobody mentions, and one can always find a newspaper job, a professorship, or a campaign post.

Jen Fain is well-traveled, and––evidently––an in-demand intellect. Her job gets her around the world: to white-flight-era outerboro hospitals, Mediterranean islands, and the studies of Eastern European intellectuals. Her observations––the first-person pronoun will often arrive late to a vignette, just before the blackout––are initially self-contained, like flash fictions, or a diary without dates. (Or a tumblr without photos? In a sense, Adler’s fragmentary, juxtapository style foresaw an entire inadvertent genre of intimate suggestive impenetrability.) She will sweepingly narrate new styles in rhetorical cliché, in romantic presumption, in social and psychological strategy: “Silence. It is a position of great power. Talkative people running towards those silences are jarred, time after time, by a straight arm rebuff. A quizzical look, a beautiful face perhaps, but silence. Everyone is exhausted, drinks too much, snarls later at home, wonders about the need for aspirin.” Her sentences flow by, even more fluid for their perfect arrangement of subclauses. “And yet.” “Of course.” “I think.” Pure rhythm.

And yet, complications––inevitably––arise. Characters and situations recur, relationships with people and places become more convoluted. Jen Fain’s voice, too, becomes knottier, more self-conscious. The anxiety moves from the abstract to the concrete––scattered impressions, gathered defensively at speed, become obscurely apocalyptic: “We may win this year. We may lose it all. It is not going as well as we thought. Posterity, anyway, does not know everything.”

Speedboat is pure form; Pitch Dark is the form applied to a conventional narrative premise. The rhythm of Speedboat becomes almost symphonic in its momentum, each of the three chapters opening with false starts, unattributed dialogue, pileups of accrued wisdom, and then unfurling. The narrator, Kate Ennis, who is having an affair with a married man, recalls snatches of their conversion and decisive scenes from their relationship, which recur, circling or maybe haunting the narrative, before slotting into chronology in the home stretch. (Adler’s exquisite commas become halting, florid: “You are, you know, you were the nearest thing to a real story to happen in my life.”)

Adler’s novels are about presence of mind, in multiple senses. Here, Kate’s mind’s presence is complicated by a not completely disentangled relationship between the real world and the world of the novel. “He” and “she” become “you” and “I”; early sections of the book are referred to in later sections; and the narrator, who may not always be Kate, ponders how best to tell this story, in staccato stabs of self-questioning.

The law is a preoccupation of Kate’s, who muses over the metaphorical implications of its views on rights, claims, injuries and storytelling––in between Speedboat and Pitch Dark, Adler graduated from Yale Law School (class of ’79). This would be after writing and not writing for The New Yorker––everything from TV criticism to reportage on the Civil Rights movement––right out of her university lit-student days, with breaks to be a film critic at the New York Times in the late 60s, a staffer on the Watergate committee in the early 70s, a student of Claude Levi-Strauss at the Sorbonne, and several other strange lacunae not filled in on her official CV. In early 2000, Michael Wolff, profiling Adler for New York Magazine, couldn’t help asking:

“I’ve always wondered: How did you people at The New Yorker actually make a living?” (It seems, in fact, a little vulgar to bring up the subject––if you had to ask, you’d never have worked at The New Yorker.)

Her eyes open wide. “I don’t know,” she says with sudden intense interest, seeming to look to me for the answer.

“I mean,” I press, “there’s often months and years between pieces for lots of New Yorker writers––what was the economic basis here?”

“I sometimes have thought,” she considers, “that Mr. Shawn must have paid people differently, depending on whether they needed it or not. Do you think that’s possible? There were writers, of course, who had private incomes.”

“Do you have a private income?”

Money, in Pitch Dark as in Speedboat, is mysterious, or taken for granted. For Kate, too, is on the move, meeting ambassadors and gurus, and splitting time between town and country (New York City and rural Connecticut, like Adler at the time), as well as islands in the Pacific Northwest. And in the middle section of the book, she makes a break with her lover and visits a castle in Ireland, where she falls into an extremely logical spiral of fear and suspicion, a paranoid break that can be read as either a brilliantly sustained comic setpiece or a harrowing psychic breakdown:

I imagine flying the Irish national airline may make one more clearly subject to the laws of Ireland, and its jurisdiction. I prefer to avoid the Irish flights. I ask whether the British Airways morning flight is open, am told it is. I make no reservation on it, thinking I now have two Friday reservations, one from Shannon, one from Dublin. If they look for me, they will be looking for me Friday. Meanwhile, I intend to make that open Thursday morning flight.

Now whose fallacy is being objectively described? In Pitch Dark even more than in Speedboat, every sentence is a model of clear thinking—in syntax and style, if notably not in content. Adler’s novels are not “brave,” in the sense of the word that is sometimes applied to artists, especially female artists, who are explicit about their vulnerabilities. Though shot through with confusion, her voice retains its cutting edge, as well as a perfect clarity. These books are better than brave––they’re honest.

The reissued Speedboat and Pitch Dark are available from New York Review Books.