We Can Objectify Transwomen, Too: Conversations about Caitlyn Jenner

What do I think about Caitlyn Jenner? I think it’s significant that her name is Caitlyn with a C, not with a K like the rest of the Kardashian shit-show. I wonder whether that C symbolizes a separation from the group, a personal distance, or if that C simply is the spelling chosen by Caitlyn decades ago, before any of those Kim Kourtney Khloe Kanye’s were even in the picture.

But I’m a straight, cis-female. I am the norm society desires, the girl born a girl, in love with boys. I’m lucky. I was a tomboy in elementary school, but never once have I looked in the mirror and felt a disassociation with the gender starring back at me. So what do I know?

I went to Chicago’s Halsted & Roscoe intersection, at the heart of the city’s Boystown neighborhood, an area you’ll meet transgender men and women, see people that chose to present as both or neither. During the city’s pride week, I stalked the strangers smoking outside bars and asked them what they thought about Caitlyn Jenner, and more specifically, what they think about the media’s coverage of her. After all, doesn’t everyone have an opinion on the Kardashians? 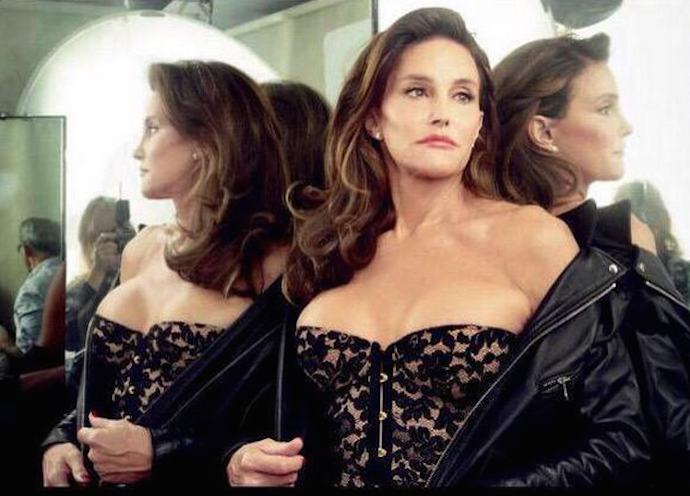 Guy 1: “She’s very courageous, and as far as the media’s portrayal, I think that they focused on her looks way too much over her life and personality. It was very odd to hear people say that they thought ‘she looks like a woman,’ or things like that.”

Guy 2: “It’s great what she did. What I don’t like about the media is just about the whole situation. Not everyone is as fortunate as her, to be of status and wealth. It almost seemed too easy, because it’s not that easy to be transgender. It almost seems unreal to me. She just looks beautiful all of a sudden.”

Kati: “Yeah… not everyone can just pay for surgery and hormones so easily…”

Guy 1: “Yes, but it’s not even the surgery, it’s the attention. She’s a very high profile woman, and it’s simple for her to get all the recognition. But some transgender kid in Nebraska for example, they have to struggle and get through life and fight all the stereotypes, but Caitlyn, they just put her on the cover of a magazine. It seems effortless. Of course it’s not, but from an outside perspective it looks that way.”

Three women at a parking meter:

Woman 1: “I haven’t seen much negative press as far as the media goes and I think it’s wonderful. I think she can finally be free and be herself as opposed to living a lie, so to speak. The only think that I did not like –“

Woman 2: “All the publicity! The video shoot? That was over the top, extra.”

Woman 1: “No, that didn’t bother me. It was the SV awards [sic]. I think the SV awards, the hero awards, there was that veteran who went and served our country and lost limbs – I think he deserved the hero award a little bit more than Caitlyn Jenner. But I’m glad that she came out and can be herself.”

Woman 2: “It’s just too much media coverage. You get people who are transgender –“

Woman 3: “Transgender, I don’t need to imagine that part. I don’t. I think it’s too much.”

Woman 1: “Also, why didn’t Laverne Cox get all that coverage? She got just one cover?”

Woman 3: “I feel like the whole thing is an extension of the Kardashians.”

Woman 2: “Yes, her being on covers is an extension of the Kardashians, and so he can have his own show –“

Woman 2: “So, he’s getting all that Kardashian attention, but I’m glad he can finally be Caitlyn instead of Bruce.”

Woman 3: “Kim showed her boobs on the internet, now he’s doing all his stuff on TV. It’s all about the attention. It’s all a show!”

A bartender on break: “What I think about her is… good for her? Whatever. I don’t really care. I work here (in a neighborhood bar) so it’s no big deal to me. I see it every day. The media portrayal depends on which media outlet you watch. If you’re watching Fox News, they come down a little bit more – like this whole Father’s Day issue came up, like they had a story like ‘Is Caitlyn allowed to celebrate Father’s Day??’ But it’s a made up holiday anyway, so who cares.”

A smoker outside in overalls: “She is definitely an icon for her time as a highlighted American athlete as a male, and after her transition, she has the possibility of being a poster child for a lot of transgender rights and has the ability to do really well for herself and the cause. I am curious to see where she goes with that and if she continues to stay in the spotlight, which I assume she will, just from all of her fame post-transition. There will always be a fanfare in the media when it comes to a celebrity having a secret life. The media hasn’t been hold-heartedly negative, but it hasn’t been completely positive. It’s all about the spectacle. From what I’ve seen, I think it has remained relatively neutral. It’s a lot more about the change and what she will do after, and it hasn’t been outrageous. It’s remained relatively positive and I support any media that stays positive.”

A guy in a maroon sweatshirt: “It’s interesting… on the one hand, I would want a little more privacy during my transition, so I definitely give her a ton of credit, not just for going through with it, not just telling her family, but doing it so publicly for the benefit of other people. As far as the media, it’s a double edged sword. In some ways they’ve been really difficult on her and really put her in the spotlight in kind of a negative way; but on the other hand, it has given so much exposure to such a complicated issue that’s so frequently swept under the rug, so it can be really inspiring to people in the same boat.”

Another smoker, this time wearing glasses: “Props to her, super amazing, coming out, especially that late in life. But also… she’s very representative of the white, upper class world and all the privilege that comes with that. Like I want to criticize her, but also it’s her personal struggle, god bless her, and she’s been an amazing role model for coming out as trans. I think the media coverage is weirdly fetishizing a lot. There was that really great Slate or Atlantic article about the Vanity Fair cover, how it was great for Caitlyn Jenner, terrible for women. It’s like, ‘we can objectify transwomen, too! Isn’t that awesome?’ It displayed that she’s yet another one of few positive role models for trans visibility, on the other hand, she’s very normatively beautiful, even for an older woman. And the fact that she’s a Republican and putting forward otherwise all these normative, conservative ideas of what it means to be an American.”