Up Right: Atlanta – Nick Cave and T. Lang, Transformation in the Heart of the City

Between April 24-27th, Up Right: Atlanta presented a profound collaborative performance between artist Nick Cave and Atlanta-based choregrapher, T. Lang presented by Flux Projects. The joining of forces resulted in a two part piece, part 1 was directed by T. Lang and was linked firmly to the loud, lively, and familiar SoundSuits. Part 2, directed by Nick Cave, broke down and built up seven young black men in a rite of passage performance. Throughout the hour the audience experienced an internal shift: vertebrae align, an energy spreads from the performers to the audience, an awareness permeates from the loud pulse of joyous movement to the unraveling and rewinding of spirit and self.   – Stephanie Dowda 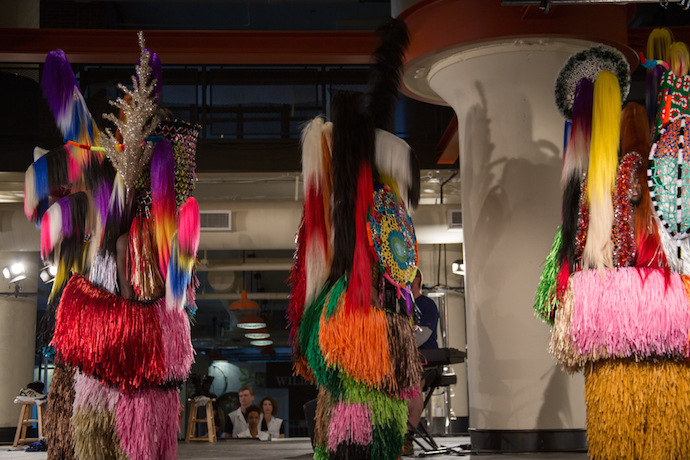 “I like that name,” Nick Cave said to me, smiling, before he handed me a lab coat and checked the fit.

Calm, approachable, focused and devastatingly handsome – I wanted to melt and rise up simultaneously, on the spot. And, spoiler alert: within the week, we all did.

Up Right: Atlanta premiered at the soon-to-be-open Ponce City Market in Midtown Atlanta, April 23-26. A tour-de-force collaboration between Chicago-based artist Nick Cave and local choreographer T. Lang, Cave was invited by the Atlanta arts organization Flux Projects, whose mission is to seek out and fund Public Art for broad audiences. Bringing the collaboration of Cave and T. Lang to Ponce City Market was their biggest project to date and a sign of great things to come for this Atlanta-based arts organization.

The initial sight of the towering SoundSuits turning the corner after a sudden drumbeat inside the performance space would give me chills every time I witnessed it. T. Lang’s thoughtful-meets-aggressive movement sent hair and raffia flying emotively, opening the gateway for the entire audience to enter. And immediately, once inside the very long hallway of not-quite-renovated Ponce City Market, I could feel the transformation of the space, the audience, even myself, begin. 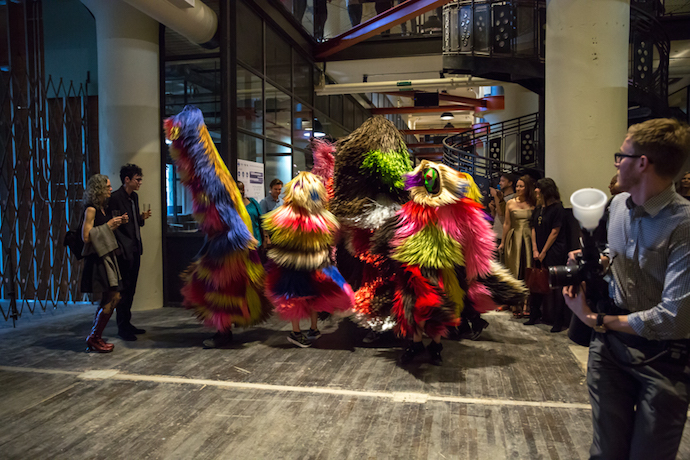 With Up Right, Cave and T. Lang created a space of equality and attention outside of our usual social landscape. Cave specializes in intentional altered states of reality through the use of movement and anonymizing by masking the entire body.

For seven shows, I watched an entire room unlock. Even while in costume waiting to go on, I and the other cast members (including Cave himself) couldn’t help but wander into the crowd and join in the virtually involuntary desire to move to the visual rhythm.

Morgan Carlisle, a local Choreographer and Dancer had this to say about her transformative experience performing completely body-masked: “As a young, black, female artist, Nick Cave created an experience that I go through often as I try to connect with people in the arts; dismissal and bias. While dancing, I made connections with and received smiles and cheers from the audience. When I returned to the second half of the show in my street clothes, those same people would not even look me in the eyes. I was still the same person, everyone else was different. It was an eerie feeling, but I needed to know these reactions towards me meant nothing as to who I am and how powerful I can be.”

For the second act, in which I was performing, Cave constructed SoundSuits that could be built on top of a person. According to the narrative, which will take place between many different sets of performers, there first enters the “Initiate,” who will receive the suit, and the “Practitioner” clad in white lab coat and gloves, who builds the SoundSuit pieces onto the Initiate so that a full transformation can occur. 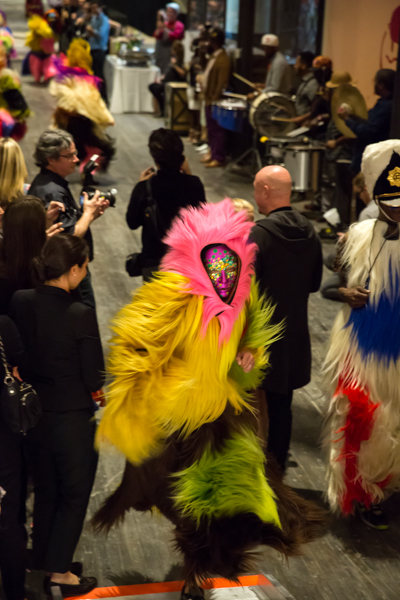 Cave is known for public transformation in his works. Taking materials from the familiar (fabric and straw), the uniquely familiar (human hair) and even the nostalgic and mundane (pearler beads, crocheted throws), once combined the reclamation of the costume is astounding if not exquisite every time.

As a performer from inside the show, as the rigor and delight of T. Lang’s dancers cascaded across the stage and out of the room, Practitioners and then Initiates slowly entered the stage and moved in seamless unison of interlocked performance. I felt time slip away. My one focus was Anthony, the young Initiate I was paired with. I would move to him again and again, building with a new sculptural element each time, eventually I would watch him disappear into his SoundSuit, the layers completely encompassing him. There was no way to miss the political relevance to our news now: watching young Black Men disappear from our community daily, echoed in the presence and performance of each young, black, male Initiatie.

At the end of the construction, Anthony became large and took up space, then made a rustling sound–which Cave himself has past described as transporting him into ‘a place of protest’. The Initiate then rises from his set, slowly walks the stage in a hypnotic pattern, and exits the piece through the parted crowd. The tension between beauty, protest, and weight of the constructed SoundSuits folds in on itself. 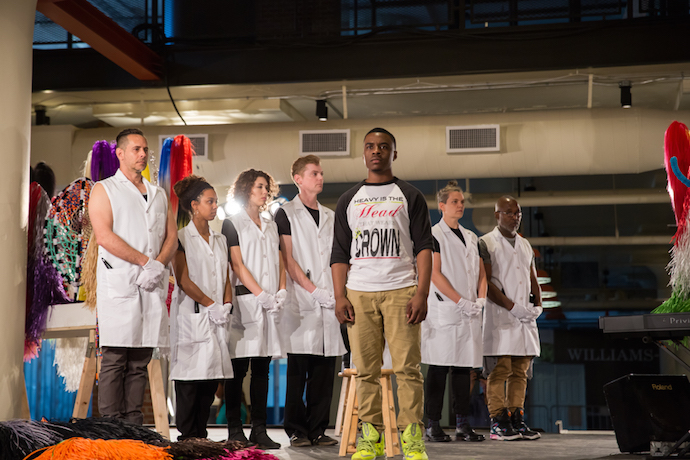 “I loved the idea of selflessness,” said Atlanta-based dancer Mickael McNeil of her role in the performance. “As a Practitioner, my energy and time played an important role for someone else. Every part and piece mattered, which helped me to realize on a bigger scale, every single person matters whether or not they are big or small in our society. Watching everything come together was magical. From rehearsal to performing it was a life changing experience.”

One of the Initiates, Atlanta Dance Instructor Pierre Bush had this to say: “ I am so very grateful and proud to have been a part of [Up Right : Atlanta], to have opened myself up like never before and to have searched deep to absorb as much of the beauty, symbols and deeper meanings encompassed in this project…where the connection to being an Initiate became very personal and moving. I was the ‘crying Initiate.’ I was moved to tears.”

It also did not escape the audience. One person told me they saw the Initiates neatly folded piles of clothes as the “personal effects” one gets from the police after a death. “A funeral mound.” Another audience member said they saw us as “undertakers”. The slow pace and delicate movements allowed the audience to stay with these moments and deepen into the experience. I have never seen a piece so effective that went from fast-paced to incredibly slow. I know enough about ritual to know that you raise the energy and then you focus it. I think this is the path of great art, too.

What I love about Nick Cave’s work is the intersection of fashion, the sculptural use of textiles, dance and movement as an expression of the body rather than the other way around. That he is able to use these elements seamlessly in a political dialogue is a testament to his originality, dedication to agency, and incredible artistry.

One of my favorite quotes of Cave’s is him speaking of himself: “I have found my middle and now am working toward what I am leaving behind.” His goal to create work that mobilizes other artists to build political momentum into their own work is palpable through the incredible generosity of his collaboration. Literally, he directly called to the artists in front of him to take on the responsibility of this work. And from what I could see, he was met with profound understanding.

He left the lit flame of our hearts with the weight of making work, making art, and speaking truth.

Hez Stalcup is an Atlanta-based Dance Artist. They are currently a Leap Year Resident with MINT Gallery.