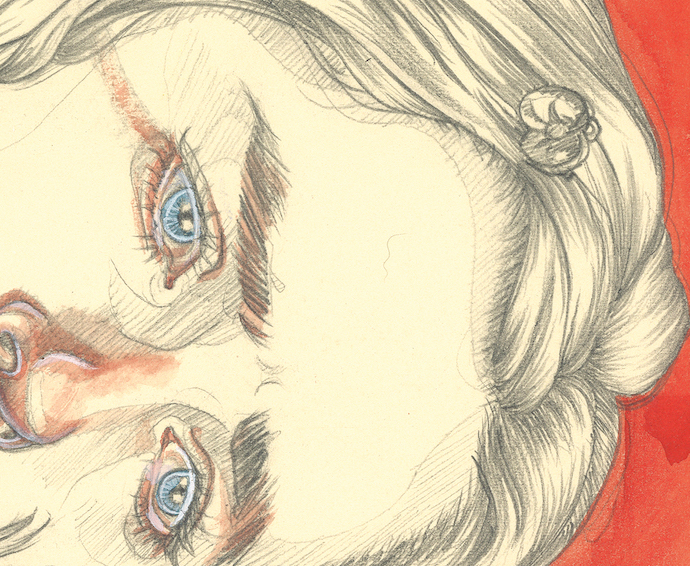 She was starving and it was the starving that made her so weak that she just lay there. It was the starving that was so strong it woke her up. The clock said it was 20 minutes later than it had been. There was a coffee maker and stuff in her room but no coffee. She filled one of the plastic cups with water and stirred in sugar and creamer. She gulped it. She hurled and spit saliva into the sink. She held back her hair and pushed back her bangs. Her hand shook when she picked up her wadded cash. She walked the blocks of the drag. The only place that was open was Chinese. Fluorescent light lit off the Formica booth. The tofu and vegetables in brown sauce came with white rice and free tea. She ate off the styrofoam plate with a plastic fork. Her phone meant nothing without the charger, it meant nothing without Rachel calling it. The pawn shop was on the access road next to the freeway. The 15 dollars they gave her was 5 gallons of gas. It was 125 miles of driving. It took her a second to figure it out. The man behind the counter grinned when he handed her the cash. She wiped her nose on her sleeve. He told her to make sure she had herself a good day. She made it back to the motel. She collapsed on the bed while still holding her key. She started crying. It was the not sleeping. It was because it all overwhelmed her. She couldn’t stand the room because it stank and everything felt gross. She wanted Rachel holding her in the cold bed because then it wouldn’t be. When she thought that everything else disappeared. If she hadn’t already written off the possibility of ever speaking to her again then she’d just get in the car and drive home, but she had, so she didn’t. That’s why she screamed her name. She buried her face in the pillow when someone pounded on the wall. She just lay there. It was all black, the white pillowcase she was staring into. She felt like she was blind, drowning. It was the world that was washing over her. When she thought she just thought she was fucked. Her sobbing gave her a headache. The light coming from beneath the hem of the drapes meant it was light out. She cried herself to sleep.

It was late in the morning when she woke up and it was the pounding on the door that did it. She did the chain on the latch. She told the guy from the desk to give her a fucking minute. She closed the door. When she walked out of the bathroom she washed her hands. The walls made this sound. It was the water in the pipes. That got quiet. The pounding started again. It was just what she heard. When she turned her back to the sink the room was there. She grabbed her backpack. She grabbed her keys off the bed. Her shoulders hunched from the weight. They were hunched from the cold. She opened the door. She looked down at her shoes. She didn’t see that the guy wasn’t there. It was because she was looking at her shoes. She headed to the car. It wasn’t snow but it was something that she walked on. She fumbled with the keys as she opened the door. She leaned forward as she drove. It stilled her shaking hands. When she exhaled it fogged the window. She ran numbers in her head. She planned her money for gas and food like there was someplace that she was driving towards. She was driving towards running out of money. She thought that. She spent some at this liquor store outside a casino. The Gordon’s was in a plastic flask. It was in lieu of food. The seal cracked when she unscrewed the cap. She gulped once it hit her lips. It burned her throat and warmed the car. It lit her brain so that she had to squint. The buzz trumped panic. She drank more as she drove. Her thoughts were all shredded. She built this lame logic all piecemeal. I’ll just end up wherever it is that I run out of gas, I’ll sell the car and get a job, It’ll work out. Such was her litany. When she reached for the bottle it was lighter by half. Fuck, is what she thought. It was because some spilled on her jeans. It was because the car swerved when she looked down. It was dusk and she was coming through a pass. What light there was barely hit the road. She had to force herself to focus to see. Trees were borne from seams next to streams. She thought Oh my god. It was something in the shadows of the branches. The siren accompanied the lights behind her. She couldn’t move because stuff was frozen inside her. It was the gin on her breath and in her blood and in the bottle sitting on the seat. She tucked it next to the console. The police car pulled behind her. He said something to her through the window. She said she didn’t know. The car wasn’t hers and she didn’t have a license. That’s what she thought, it’s why she panicked. She said she was speeding because the car was overheating. He glanced away. She said she was trying to make it to the nearest exit. He asked her for her license and registration. She said it was in her backpack. She said it was in the trunk. He said he’d send someone to help with the car. He walked back towards his. When she kicked the door closed with her knee she was weighted down by her backpack. She ran straight for the shadows. They were shaped like trees. This barbed wire fence cut along these cattails. She hopped it at a post. She ran through slough and bracken. It was the trees she was aiming for. She didn’t look back until she hit them. The cars and the cop were a blur against the traffic and the lights behind them. It was a forest 3 yards in. She ran, kept. Her ankle twisted when her foot stuck in the mud. She limped and kept limping. She panted and paused. She had run downhill to get to the spot where the ground just ran away from her. She stood straight against the steep. The rain that pressed her bangs down was snow that melted from the branches that spanned above her. She thought she heard cars and people. It was water rushing, blood ringing in her ears. She swore the lights she saw were traffic, houses. She swore they were safety of some sort. She ran toward them. She was too drunk and it was too dark to see the ground cut off at the wall of the abandoned quarry in front of her. She just fell through the air and towards the water. The lights were the center of her frantic vision. They were just stars coming through the trees but they still looked like a way for her to get the fuck out of there because they just had to.

No Other is now available from Sator Press.