Up On the Jumbotron 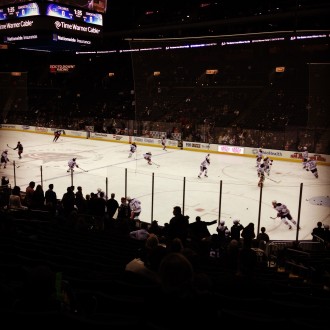 Last year, I moved to Ohio and got into hockey. Columbus was the first place I’d ever lived that housed a pro or semi-pro sports team, and so the Blue Jackets became the first team I ever felt connected to. This was at a time when I was depressed and trying to get my drinking under control. I was looking for activities that I could enjoy sober. I knew on some level that beer and drinking were part of hockey culture, but I figured that, at ten dollars a pop for a tallboy, I would go broke before I could catch a buzz at an NHL game. I bought season tickets.

My seat was the cheapest available and in a section called the “power level.” I was in the very last row of Nationwide Arena. When I leaned back in my seat, the back of my head rested against a concrete wall, but because the arena was only half-filled most games, I moved down and sat in a better row and none of the ushers ever bothered me because I was always alone. Only once did another fan tell me I was sitting in his seat, and even then I just moved down a couple seats. Most of the time, though, nobody interacted with me. I sat there in the Blue Jackets sweatshirt I’d purchased on opening night and ate my hot dog. Looking like the people surrounding me, with the same silver star and Ohio flag logo emblazoned over my chest, felt like a way to connect to them. I only showed emotion whenever the gliding rhythm of the game was broken by a goal or fight. My biggest fear was that a camera operator would catch me staring off into space during those moments between puck drops, when I was lost in thought, and I’d end up on the Jumbotron looking stupid and lost and sad.

Nights, before the NHL season started, I always ended up at the dive bar up the street from my apartment. It didn’t matter if it was a week night and I had to teach at nine the next morning, I still went to the bar and drank until last call and someone was putting a broom in my hand. The bartenders knew what I drank and the regulars called me “professor” (even though I was merely a grad student teaching one class) and I felt kind of important. People that really drink–that struggle with drinking–and people that have worked in bars know this feeling intimately. You might be a nobody outside the bar, but inside you feel accepted and loved and revered. You might be surrounded by people who know something about you, but not enough to miss you when you leave.

I had that same feeling at Blue Jackets games. During intermissions I walked circles around the arena, watching people. People talking and laughing, buying beer and souvenirs. All of them wearing Blue Jackets shirts or jerseys or sweatshirts (or if the Red Wings or Blackhawks were in town, the opposing team’s gear). All of them moving with or against me, only connected by the game we were watching in twenty minute increments. I started recognizing the different groups that congregated at hightop tables around certain concession stands. When I felt brave I would eavesdrop on their conversations about trap defenses, grinders not playing aggressive enough behind the net, the away team’s goalie’s movement in the crease. I didn’t know enough about hockey yet to talk to these people, to make friends.

At some point, I learned that being a fan is lonely. That truly diehard fans are all compensating for some void in their life. That when the lights in the arena shut off and the national anthem is sung you’re supposed to be transported from the world outside the arena, away from problems that persist and grip at you daily, and supposed to be thinking only of the game, the Pepsi promo girls dancing in the aisles, the stupid green mascot that makes no sense, the whole thing one big sleight of hand trick. I’d sit at my seat and watch the families around me and think of my family. My father was never into sports, but when his first-born got into sports, he had to, also. One of my earliest and most pleasant memories of him is when he took me to a Virginia Tech vs. Miami football game. I was eight. It was the first live sporting event I’d ever seen. I remember my father haggling with a scalper outside the stadium. I remember where we sat, our view of the field, but I don’t remember if we had any fun or if he let me get something from the concession stands. It’s a memory like a lot of memories I have of my father: blurry and out of focus, his presence shadowy.

My brother and I weren’t allowed to ask him about his childhood (his fugitive father, his homelessness as a teenager). What little I came to know is hearsay, learned from my mother. What I know now is that I felt closer to him every time I stepped inside that Ohio dive bar and had a bottle placed down in front of me. It was either the feeling that I was re-living one of his experiences (being in his thirties and drinking alone at some shitty bar), or that I would run into him, however improbable that might be. I imagined drinking together with my father for the first time at the bar. Keeping pace with each other. Each drink sliding us closer and closer to that edge, that breaking point. To the point where the night gets reckless and people could get hurt. Both of us knowing how easy it is to slip toward that hurt.

The Blue Jackets were picked by most hockey pundits to finish last in the entire NHL last year. I knew this before I bought my tickets. I didn’t care. I wanted a team, something to belong to. I wanted to make sure I never woke up somewhere strange or threatened someone inside a bar again. For the first part of the season the Jackets were bad, as bad as everybody assumed they would be. They couldn’t score on the power play, gave up bad goals late in games, took too many games to shootouts they couldn’t win. I didn’t care. I bought a Blue Jackets jersey after I hit six weeks of sobriety. I rode the city bus to and from games alone. Finally, they hit a winning streak. Soon, I was watching playoff-caliber hockey.

I wanted to write an essay about hockey when I started this. Instead, I’ve ended up writing about a couple of the dirty corners in my life. Maybe that’s the only way I’m able to access those hard-to-reach feelings: through something arbitrary like sports. Maybe I am the cliché, the emotionally stunted male–daddy problems and all–using sports as a way to uncover the feelings I try drowning out with drinking some nights. I think becoming a diehard fan of a sports franchise work fits the equation, too.

I remember the night he got in a fight at one of the bars in town and had one of his incisors knocked out. My brother and I had to spend the night at a friend’s house while my mother picked him up and took him to the hospital. When I saw him the next day he showed us where his tooth was missing. Years later, my father would divorce my mother and jettison himself from our family. The last time I saw him he had an implant for his missing tooth, similar to the ones the Blue Jackets players flashed during post-game interviews.

The last game of the season the Blue Jackets were playing for a playoff spot. The arena was sold out and I had to sit in my cheap seat with the concrete headrest. I didn’t care. The Blue Jackets had only been to the playoffs once during their thirteen years as an NHL franchise. I wasn’t ready for the season to end. I didn’t know what I’d do if I wasn’t going to games, streaming them on my computer, or reading about the team online. During the Jackets’ last road trips I’d broken down and drank. I’d tried to fight a DJ during those nights out and smashed one of my kitchen chair with a baseball bat. I threw up blood and bile the next mornings, not remembering why I’d been so angry.

The Blue Jackets came from behind to score three unanswered goals on the Predators and win that last game. It was incredible to feel like part of the victory, even though I was just a spectator in the stands. I was in the cheap seats giving people high fives, joining in on cheers, and talking shit about the Predators with a bunch of people I didn’t know. We were all ready for the playoffs. As all the fans left the arena it was announced that the Minnesota Wild had won their game that night, too, and that the Blue Jackets had been eliminated from playoff contention due to a tiebreaker rule.

What happened later that night I don’t remember, but I have been told the story by a few different friends. I drank. I snorted drugs in a bar bathroom. I threatened people. I fell face first into a sidewalk and fucked up the side of my face. I acted like my father.

I’m trying to connect all of these things. I’m trying to make sense of myself, why I drink, of what kind of man I am or am trying to become, and why I’m still so angry at my father. This season, I’m not following the Blue Jackets as closely, but I’ve started going to the games with other people. I still walk laps around the arena during intermission alone. I’m still drinking and hanging out at the bar, but I haven’t had an episode yet this winter. I know it’s only a matter of time before something bad happens, but I’m afraid to quit for good, afraid to lose that loose connection to my father, afraid that that shadowy memory of us together in the stands at a football game will fade completely, and that I will be caught in this thought at a Blue Jackets game, exposed up there on the Jumbotron.