[I asked Sean Kilpatrick to write about a work or works of art that had influenced his writing, including his most recent, Gil the Nihilist. The following is his submission. -Ed.] 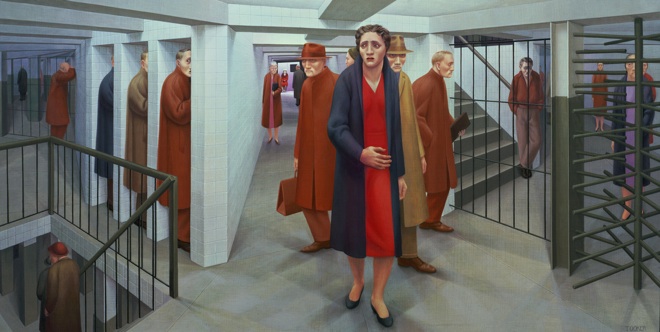 George Tooker drafts the spatially rogue. Look what passes for this woman’s hand. The anomalous proportion coerced to fold, sharing a sprain with the specter rapingly adjacent; she’s pregnant with his fat spiderling. Sorry, so are you, vulnerable and clingy enough that any enemy commits a hug. Everyone in the subway is barred by their angle, tripled to clone and blockheaded the way starving cures. They frequent their echoes, scooped in terror, flattened like lice by means of climbing – these are the only conditions I’m aware of. Proximity disguises orgasm, invents a rubric dopamine whipping all. The rubric: nightmare the twentieth century keeps having. What pettily deems control our fixed deprivation subtracting with a saunter because death amounts? Fetal postures bustling geometry instead of clothes, schizophrenic metal masturbating for architecture, pinch of industry. The way people think is the worst and straightest line. The diseased grid we glue ourselves to, evolutionarily sneezing; we should never let our diapers be changed. George Tooker did the outside one better. Design what you love for the nearest dumpster. Then skies are that version of refused. The little announcements called days. Worse than shades according this painting its nonstop jail. How did a president approach Tooker without being his next painting? Suck his hands in rocket swill? We’re too tamed or patient.

She’s the cutest piñata death has, great swag for enticing rigor mortis, dystrophy slow dance, entering the box fully princess, arms like wands hailing which floor. This video reignited my epididymitis. She’s giving us a cancer we’re not worthy to contain. Anyone worth loving is partial in your water, the rot you sip at, the proper shared contamination. We approach as fungi shed in the anomaly. The water’s turning black because you’re not involved with her. Richard Ramirez striped victim germs off his long and beautiful fingers. Lam is the admin of her fugue, hiding beneath the same muscular wallpaper, his corpse riding hers twenty years anywhere. Ramirez cuckolds the viewer, ganks the waltz, sneaky possession. She’s pronouncing the worthiest vacuum. You’re cornered with your crotch. She hops scenes, already impossibly in the tank, twirled by charts, hopscotch trance, taken. You have to hold a chart, a stat sheet, or sheets, to understand the man’s damage. His reach. He died married, not caring if you had a life. He doesn’t need a fucking ghost.