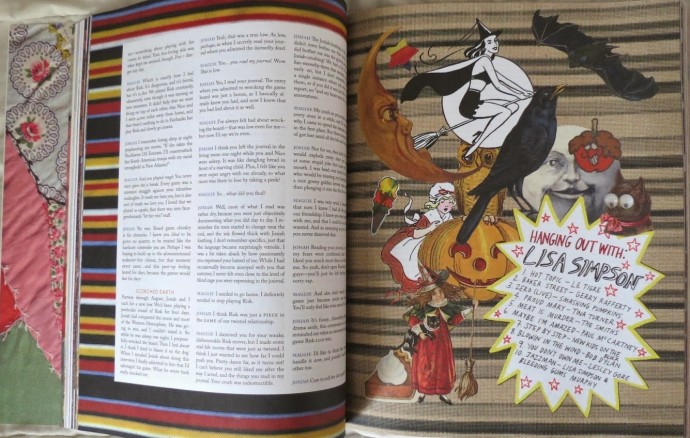 Last month or so, my boyfriend and I headed out on a Friday night to one of our favorite bars in Chicago, this beercade named Headquarters whose space is lined with early ‘90s arcade games and pinball machines themed after TV shows, movies, and my personal favorite, the Playboy magazine. The place is thick with hipsters. I’m only 22, but lately, going there, I’d begun to feel old. Like I was out of touch with these kids wearing Tweety-bird scrunchies. So this night, I wore a little black dress under my grandpa’s hand-me-down flannel shirt in that way thin girls wear stuff to say “oh, yeah, I know I look amazing, but, like, whatever.”

We get there and I order a craft beer based on the cuteness/irony of its can and get in line to play this new “Simpson’s” pinball machine. There’s this incredibly young couple already at the game that accidently hit four-player rather than two, so they invite my boyfriend and me to join. It’s going well, we’re having a good time, and then the cute little blond barely-21 year-old says to me “Oh my god, you remind me so much of Tavi Gevinson!”

I think I replied with something like “Really? That’s so cool, because she’s like totally one of my idols, because I’m a writer and I’m obsessed with magazines, especially her magazine and whaaat? I’m not even that cool” – eventually the blond girl figured out I was NOT exactly like Tavi, because if I was, I’d probably have just responded like “Oh cool, yeah thanks” and then given a bored-looking bitchface instead of gushing over a first-impression compliment.

Here’s a rundown: Tavi’s 11 when she starts her own fashion blog, Style Rookie, that talks about fashion trends and adventures, starts getting invited to runway shows in New York and Japan, and is 15 when she launches the online teen girl’s magazine, Rookie, because she couldn’t find good teen magazines that weren’t written by 35-year old women who have never had to deal with a 3 a.m. drunk tweet, couldn’t find a magazines written with teen girls seen as wallets rather than intelligent individuals. Within days of its launch, Rookie was getting hits in the millions and last year Drawn & Quarterly picked up a print version of the site’s first year highlights, creating Rookie Yearbook One.

This October, Drawn & Quarterly published Rookie Yearbook Two, collecting the hits and highpoints of the second year. I’m obsessed. Like, I’m not even embarrassed by how much I love this book edited by a 17 year-old, written for teenagers, because whenever I think “oh yeah, maybe I should read something marketed more towards girls my own age,” I go to rookiemag.com or pick up the book again and remember “fuck haters, this is amazing.”

I realize for those of you who haven’t been over to the site yet (fix that nonsense), it’s not super persuasive for me to simply say “but it’s so cool! And glitter!” over and over in every way I can think of, so for the resisters, here’s some real, legitimate reasons why you stop caring about the haters (and age suggestions) and obsess with me over Tavi Gevinson.

The Topics are Important and the Interview Subjects are Amazing

Don’t be afraid you’ll open Rookie Yearbook Two to some article on “How to Dress for your Body’s Fruit Shape.” Ain’t gonna happen. Actually, unlike Style Rookie, there’s hardly any writing on fashion (pictures only, I’ll get to that later). Space is reserved for actual issues: “It’s Not Okay to Write off Sexual Harassment as ‘Male Hormones’ (“Will Be Boys,” page 242); “Loving and Living with Alcoholic Parents” (“Last Call,” page 234); “Using Humor to Deal with Rascism” (“It Takes A Lot to Laugh,” page 122). Also, even more so than in Rookie Yearbook One, the writing focuses more on inclusion of all gender/sexual orientations (in an article on how to initiate a kiss, there’s advice for girls going after boys as well as girls going after girls), including awesome articles written by a trans* born girl now identifying as a boy, who offers advice to other teens going through what he has.

In the first year of Rookie, the interviews were wide-ranging, with Tavi interviewing Aubrey Plaza, Daniel Clowes, Sky Ferreria, and David Sedaris (whom Tavi literally asked how much money he made). In year two, the interviews are with folks anyone connected to popular culture would love to hear from, including Mindy Kaling, Molly Ringwald, Carrie Brownstein, Emma Watson, Lena Dunham, Chris Ware, and Morrissey. The key aspect of the interviews is that none of the writers (including Judd Apatow’s daughter Maude) have been sucked under by rules-of-journalism dictates, meaning they have no fear to ask whatever they hell they are curious about (i.e., what’s its like for Carrie Brownstein to be considered an ‘old’ musician).

Literally just to prove my point, I opened to a random page, in this case, Page 156 and 157, which is the introduction and Editor’s Letter for the month of December. The theme (they have one each month) is Faith, and the spread is an idea-board filled with images of lace, 1940’s Romeo and Juliet, cat eyes, Frida Kahlo, gypsies, roses, candles and more. Half of reading this book is drinking in the visuals, trying to figure out who it is in all the photos, then Googling the references to get full effect.

Then, there are the photo spreads. Good lord, the photo spreads. I basically want to buy a second book so that I can tear out all of the photos and hang them all over my wall. Rookie’s photo shoots don’t play by the rules of fashion magazines (in which the clothing and the designer’s name are paramount) – they’re of a piece with stuff you’d see in Urban Outfitters or American Apparel catalogue, yet more inclusive in terms of body type. Lots of the shoots are organized by Tavi or by Petra Collins, the 20-year old behind American Apparel’s most controversial graphic tee. Some themes from the spreads in this issue: Mermaids on the beach, Cotton-Candy Beehives, Pastel Queens Poolside and Murder Mysteries. Like Style Rookie, the outfits are often outlandish: models may have streamers in the hair and gemstone unibrows, My-little-ponies hanging off of dresses, and yet there’s an unmistakable beauty to the audacity.

When I was in my teens, I was always getting free trial subscriptions to magazines courtesy of buying some dollar amount of clothing from Delia’s or wherever. I never connected to those magazines like I’ve connected to Rookie even when I was in their target age range, despite reading every issue cover to cover before ripping them to shreds and using pretty pages to make weird decoupage artwork of mushrooms (I was more “artistic” than popular those days).  I remember reading this article when I was 16 of “The 17 Best Dressed Girls in America” and most of the pictures were of girls wearing just a Marc by Marc Jacobs dress and sunglasses being like “I describe my style as laid-back classy.” Don’t get me wrong, I LOVE Marc Jacobs (expect my next article to be a piece gushing over how he’s turned around the house of Louis, plus unadulterated affection for his affordable Jacobs label), but a $400 dollar dress DOES NOT give you any more style than the millions of other girls in America.  Rookie gets this.

Even today, I often close the cover of grown-ass women’s magazines with the distinct feeling that, since I’ve never been to an island or owned a $300 throw pillow, I don’t quite get it. I mean, I still can’t relate to that “Best Dressed” girl from my youth, even now that I have a job and can buy things. I relate, even at 22, far more to the girls gluing googly-eyes and fake-flowers onto denim jackets throughout the pages of Rookie.

Ditto for every subject outside of fashion: other magazines give advice on how to tighten your core or maximize your free time; Rookie tells you how to hack a computer and get period stains out of a blanket before anyone notices. You know, like things you’d actually want to know. Other magazines offer web-exclusives such as “Check out our partnership lip balm with Revlon!”; Rookie puts out three substantive articles a day.

Maybe the best summary of Rookie Yearbook Two comes from the question Stephen Colbert asked Tavi last winter: “Your magazine actually has positive images for girls and positive messages for girls, but if girls feel good about themselves, how are we going to sell them things they don’t need?”