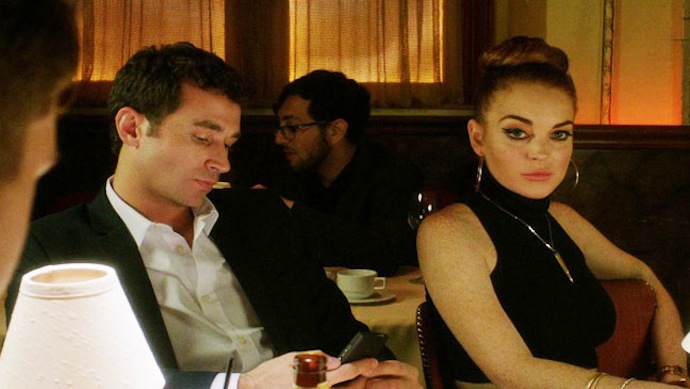 I’ll give full disclosure: part of me had made up my mind before I’d even watched The Canyons. I’d been excited since I first found out about the project via the Kickstarter campaign over a year or so ago. My main interest and enthusiasm came from the fact that Bret Easton Ellis was writing it, and the amount of control that he, Paul Schrader, and Braxton Pope would have over it suggested to me that Ellis’s voice would be clear throughout the film, not watered down, not compromised.

In some respects – and I am slightly loathe to go too far into this, as I don’t particularly want the piece to be a defensive swipe or anything patronising like that, but – having a good feeling prior to The Canyons’ arrival put me at odds with the majority of speculation that started to amass online leading up to the release date; months and months ahead, in some instances. The snarkiness was oozing.

I can’t decide whether the Lindsay Lohan thing is a lot more or a lot less complicated than it actually is. Much of the time it seems that the tabloid press has this weird relationship to her like an obsessive ex or something, simultaneously stalking her and yet unable to make up their minds whether they want her to crash and burn or make a U-Turn towards their own unbalanced morality. I dunno. Part of it just feels in line with the usual abhorrent sexism towards successful young women who like to have fun and are therefore chastised when they experience difficulties, the press playing the part of the passive aggressive and self righteous model citizen who seems to demand an apology for something that has nothing to do with them.

If you’d asked me a couple of years ago who I would like to star in a movie about young and beautiful people in Los Angeles, written by Bret Easton Ellis, I’m quite sure that Lindsay Lohan would be right up there in my dream choices. She fits into that world, and her casting took on some kind of weird, meta-perfection. She is the wealthy, talented, sexy illusion (in terms of what the press highlight) that Bret Easton Ellis writes about in the equally pristine and damaged worlds that he creates within his fiction, where privileged LA rich kids snort coke, fuck, and fall from one party to the next – a confused and seemingly contradictory mixture of allure and repulsion; seemingly contradictory because if people are honest they can admit that there isn’t a contradiction: it’s all attractive and alluring to think about, good or bad. The worlds he creates are like the corpse of an episode of E! News, autopsied for truth and desire.

That Bret Easton Ellis chooses not to judge is where people get confused – the grey area his characters and fantasies are contained within isn’t laced with emotional manipulation that guides the reader into how or what to feel – it doesn’t need to and shouldn’t have to. The thing is, his work exists in a world where judgement (even if those doing the judging don’t or can’t sincerely believe what they’re talking about) is second nature. And Lohan being cast because she was the best person for the part, as Ellis has explained in interviews, simply isn’t enough – for the press and trolls, she can’t and won’t be taken seriously – conclusions are already made. The fact that she was put as a lead next to an adult entertainment star is just more ammunition – there’s no way he could be taken seriously either: the mainstream press cannot be objective about these things.

In fact, both the leads play their roles to unsettling success. From the opening scenes where Deen’s character Christian is playing on an app similar to Grindr and boasting of his sexually open relationship with Tara (Lohan), the sense of malice that he transmits quickly sets the nervous speeding beat of the film’s heart.

Lohan’s Tara, trapped in a suffocating situation of her own making, makes for a fascinating character too. Her past is revealed, someone struggling for money and jobs in Hollywood, which explains her present, but her future seems completely uncertain – there’s a hopelessness that’s intoxicating – if there’s nothing to look forward to, then why not jump headfirst into the giddy pain and pleasure of the here and now, right? You see what I mean about the meta thing?

The Canyons is set in Christian and Tara’s world. Christian is from a super rich family, lives on a generous trust fund in an immaculate home in the Hollywood hills. He’s a film producer, but that seems more out of necessity than love (as he explains to his therapist, played by Gus Van Sant, he has to do certain things to stop his father from cutting off his cash supply).

Christian’s real motivations centre around control and power – something he seems unnervingly aware of. The power dynamics, always unbalanced, are central to the film. Whether it’s the power that Christian holds over the people working on the movie he’s producing, the financial power he holds over Tara, the power he takes from the threesomes and group sex that he indulges in nightly – it’s his fear of losing this control that leads to the desperate, darkest sides of his personality.

I was pleased to see that the ghost of Ellis’s last novel – and his best book, in my opinion – Imperial Bedrooms, is still hovering and the obsessions that dictated the horrors held in the pages of that piece still hold sway in the writer’s imagination. Paranoia, anonymous text messages, constant ringtones signalling things that are almost too much to bear, accumulate a grim tension. Paul Schrader’s shrewd direction helps keep the atmosphere building just enough to tighten and squeeze life from beginning to end without popping into cliché or collapsing under its own remorseless weight. And speaking of the directorial eye – for all that’s been made of the micro-budget and all expenses spared casting decisions, The Canyons looks as stunningly enchanting as it needs to, with the Los Angeles sunshine glaring down as ominously as the shadows that it helps to cast.

As much as the film is about possession, about having things: money, sex, people, it is equally about loss, about not having those things. The things lost in The Canyons aren’t as materialistic as some of the objects that Christian likes to be surrounded by; they’re things like regret, the loss of self, the loss of inspiration, of dreams, and critically: trust. In the trailer for the film, Lindsay Lohan is talking about movies when she asks Gina – one of the only genuine innocents in a world where everyone is in some way guilty, whether they realise/admit it or not (played with excellent subtlety by Amanda Brooks) – if she remembers the last time something really meant something to her, but she might as well be discussing their lives in general.

One of the aspects of self that’s been lost in The Canyons claustrophobic world is privacy. Aptly, for a film conceived and distributed through digital media, the characters’ lives and secrets are stored unreliably by mobile phones and computers, ultimately as untrustworthy and as easily exploited as the people who use them. It feels very certain from the beginning that The Canyons is not a place where secrets worth having stand any chance of remaining clandestine – a dangerous transparency rumbles in time with the dread that runs throughout. Everyone is trapped and in their own way everyone – from Christian’s obvious cruelty down to Ryan’s (Nolan Funk) unwavering dream of fame as an escape route is guilty.

Tara holds the multiple threads together, linking the pasts of the various characters together and causing friction within their lives as well as her own. Lohan plays the contradictory part well, and Ellis and Shrader let us in as voyeurs on the whole seductive mess – making the viewers just as helpless and lost in the mire as the characters in the film. There are no easy exits.